Nine World and Eight Olympic titles; that’s Team GB’s haul for 2008 – so far, that is. That kind of excellence doesn’t ‘just happen,’ who’s behind it? The GB head coach is Aussie, Shane Sutton – he was still in Beijing the day after his squad’s triumphant campaign ended, when we spoke to him.

PEZ: You weren’t a bad rider yourself, Shane – Milk Race Winner?
Shane: Yeah, yeah, but that was all a long time ago!

PEZ: You rode the Commonwealth Games in ’78 – changes since then?
Shane: The guys are bigger, stronger, faster – training methods have progressed. Back then, it was a case of; “more is always better.” The philosophy has changed, it’s all about speed now, including the endurance guys – in the team pursuit final, their first kilometre was a 1-02. 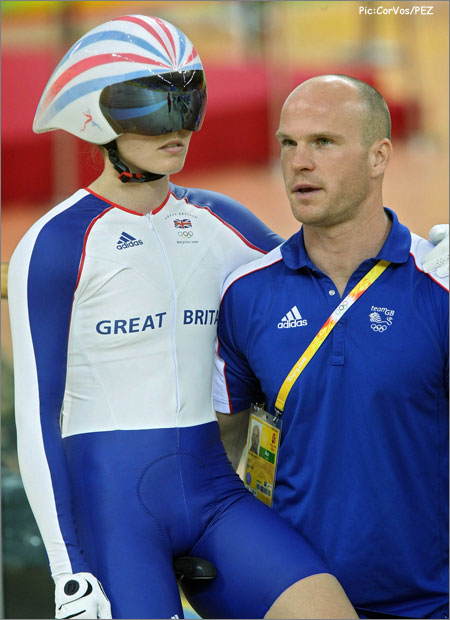 PEZ: You and David Brailsford run the operation – how do your responsibilities split?
Shane: Dave Brailsford runs it, all the financial and funding issues. My remit is the performance of the squad, to give them what they need to deliver the results. I have a great group of coaches, Ian Dyer and Jan van Eijden, to name two. We have masses of knowledge now, not just from the coaches, but from the riders – the Queallys, Hoys and Macleans have so much experience.

PEZ: Which medal gave you most satisfaction?
Shane: Seeing Nicole (Cooke) progress over the years has been great. Probably my most fulfilling experience was when Chris (Hoy) won kilometre gold in Athens, to be there with him was a great moment. 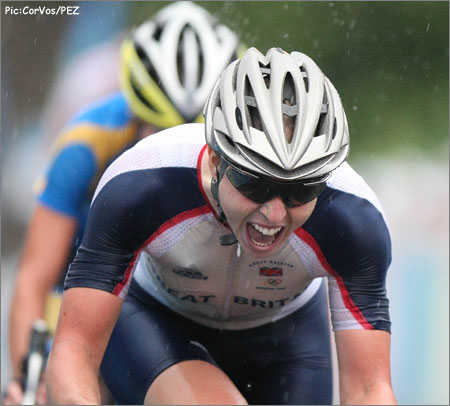 Nicole Cooke’s win in Beijing was a highlight for Sutton.

But at these Games, seeing Vicky Pendleton win was the pinnacle; she came away from Athens with nothing, to see her win here was the best – the rest of them will kill me for saying that! 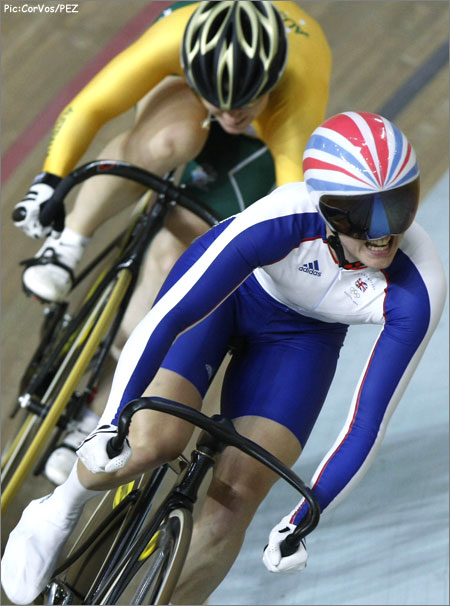 But Vicky Pendleton’s win was the ‘pinnacle’ for Sutton.

PEZ: Surprises?
Shane: Jason Kenny’s progress has been amazing – he’s a real product of our coaching system; from World junior champion to Olympic gold in the team sprint and silver in the sprint. There aren’t many star junior riders who continue up the curve into senior racing. 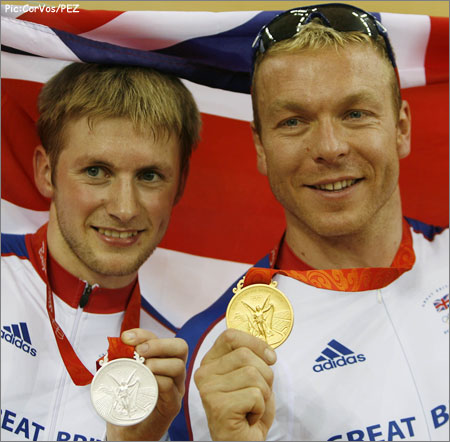 Hoy has tipped Kenny as the sprinter to watch in 2012.

The coaching squad has done a great job; earlier in the year, I was looking at Jason and thinking; ‘Ross (Edgar) will have to watch his place in the team sprint line-up!’ And there he is – Olympic team sprint champion, chasing Chris in the sprint. 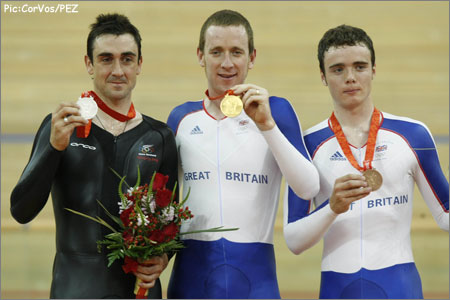 Steven Burke’s place on the podium in the individual pursuit was yet another high point for the GB Team.

Steven Burke’s development has been great too, after that bronze in the individual pursuit, he has to be favourite for that title in London. We even held him back a little as far as gearing goes, he was on 98″ so there’s a lot still to come. For me, Steven Burke’s was the big medal of the Games.

PEZ: If you had to name just one factor in GB’s rise to the top?
Shane: Leadership! The really big results started in 2002 with the team sprint and kilo victories; Peter Keen stepped aside just before Athens in 2004. Dave’s influence since then has been to make the system more rider friendly and more about the athletes.

PEZ: The madison; a disappointment?
Shane: Bradley wanted so much to win three Olympic golds. But I think that the emotion and relief of winning golds in the individual and team pursuit finals, coupled with the pressure was just too much. The team pursuit series was the fastest in history and he set a new Olympic record in the individual; that takes a hell of a lot out of you. No one felt for Brad more than me on Tuesday night, I could see it just wasn’t happening out there. I felt sorry for Mark Cavendish, but there will be plenty more chances for him. 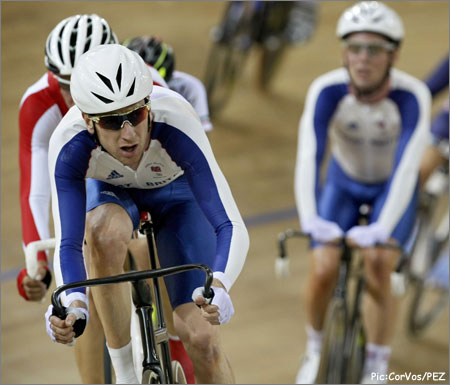 PEZ: The mens’ road race must have been a disappointment too?
Shane: It’s taken five or six years to build to the level where we can win nine World and seven Olympic titles on the track. The challenge now, is to deliver a road programme – there’s a British kid out there who can win the Tour; it’s up to us to find him.

PEZ: Australia had a poor Olympics, why?
Shane: That’s difficult to answer, I’m a Welshman now!

The Aussie system is still good but it just didn’t happen on the day.

At the Commonwealth Games in Melbourne, we didn’t get Chris’s preparation right and the Aussie, Ben Kersten beat him in the kilometre; we just got the timing wrong. The Aussies got it wrong here, but they’ll be back. 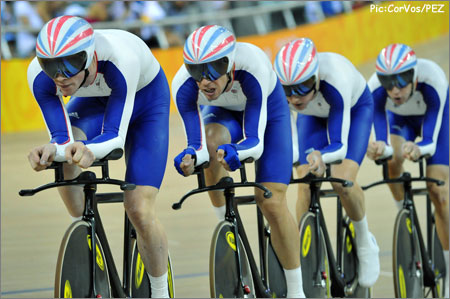 It’s sad for me, I have green and yellow in my veins, but red white and blue when it comes to cycling. When Vicky Pendleton was riding against Anna Meares, in the sprint final, I was 100% behind Vicky.

PEZ: Some big names ddn’t perform either – Sireau, Bos.
Shane: But was it a case of they didn’t perform, or we didn’t let them perform? In the World Cups, Bos was dong the business; at the Manchester Worlds, in the team sprint, France were dominant. At the Worlds, we had the criticism that we were going too well too early for the Olympics, but we got the workload and the tapers right. I think all credit has to go to our coaching staff and riders rather than saying that the others; “weren’t going.” 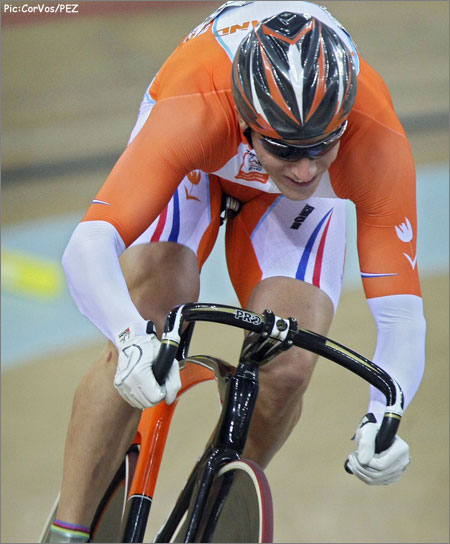 We’re a team, from the support staff at Manchester, up to Dave Brailsford, a team. People said to me that when they saw us on TV at Beijing, we looked like a team, that’s because we are!

PEZ: Best thing about your job?
Shane: Helping the riders, doing all the little things for them – it might sound patronising, but it’s true. I’ve been criticised for doing too much for the riders, but I reckon that if you give a little, you get a lot in return. 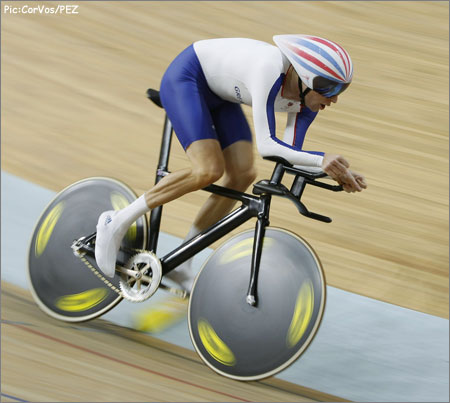 Wiggins had to ‘settle’ for two golds in Beijing – that’s how good the campaign for Great Britain was.

PEZ: And the worst thing?
Shane: Being away from my family for long stints; they’ll suffer as long as I’m in cycling. But the thing is that it’s not a job, it’s my life. When Dave Brailsford and I are sitting in the office at 9.00 pm, we don’t look at it as our job, it’s our passion. I have a new grandchild, that I hardly see, that’s part of the price.

PEZ: What’s it like saying to stalwarts like Jason Queally and Craig Maclean; “you’re not going to Beijing?”
Shane: Real, real tough! They’ve been marvellous ambassadors for our sport, but you have to be able to look them in the eye and say; “it’s over.” You have to be upfront with riders; the day after the final Olympic trials when Jason knew he wasn’t going, I came in to my office to find a card from him on my desk – that meant so much. That period was an emotional roller coaster for me. 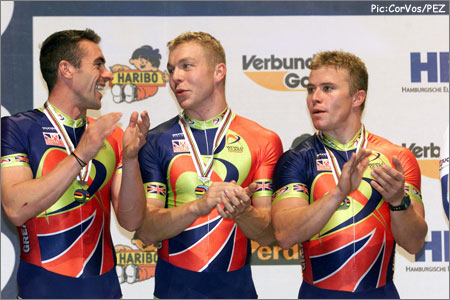 Maclean and Queally have been around for a LONG time (along with Hoy) – there will always be a home for them within the GB system.

But there are still plenty of opportunities and avenues for these guys within our system, they have so much experience. The term that Dave Brailsford and I use is; “compassionately ruthless.” We nearly lost Queally to the sport in 2002, but we sat down with him and the last six years have been the best of his career. McLean and Queally were two of those who laid the pathway to where we are now.

PEZ: Where now?
Shane: Back to Manchester! Seriously, we still have the BMX to come but Dave and I are brainstorming London already. This may sound hard, but I don’t think we’ll be doing our job if Chris Hoy rides in London. There has to be “upward pressure, even on riders like Chris. We’re not going to let the rest of the world catch up, there are so many people working towards London, 24/7. 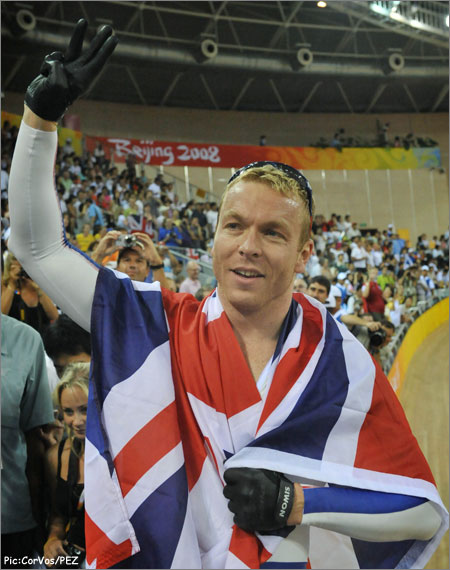 PEZ: Are you worried about ‘post Olympic blues?’
Shane: Athletes enjoy nothing more than winning, they may take a few days to reflect and there might be little ‘downs,’ but cyclists live on morale and their’s is sky high.

They’re professional athletes, and who wouldn’t want to be at their best when the Olympics are on their doorstep in 2012 ?

To the rest of the World’s track squads; “you’ve been warned!”

With thanks to Shane for being so generous with his time.