George Hincapie has won Ghent-Wevelgem, the San Fransisco Grand Prix, been a perennial classics contender, and is one of the main workhorses for the U.S. Postal team. All this from a man that grew up in the New York City suburb of Farmingdale Long Island, an area better known for lifting weights at the gym, and cruising Hempstead Turnpike for girls. We talked to George about his life, love of bike racing and of course the upcoming Tour…

– Interview by Randolph Scott –
It was my first year of racing, and I was at a local criterium in New Jersey when I first saw George Hincapie. He was over 6ft and very young at the time, and I couldn’t believe that this kid was actually going to try and do the Senior Men’s category 4 race. “Hey rob, who is the tall kid? Shouldn’t he be on a basketball court” I asked my friend who had already raced for a year. “Oh that’s George Hincapie he lives out on Long Island.” “I bet the big guy is dropped by the tenth lap” I said to Rob while we sat on the line and waited for the start. 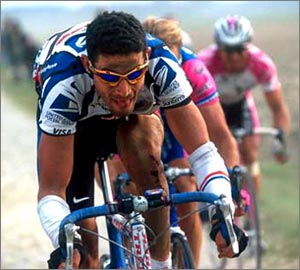 As you can imagine, he didn’t get dropped. As we came around the tight final corner with 200 meters to go on the last lap, I wasn’t closest enough to try and sprint for the top 5, but I was close enough to watch it unfold. I could see George a full head taller than the rest of the field begin his sprint from about 5 places back. He coasted the last 50 meters to the line. If you were standing at the finish, you would have thought that he had won the race with a last lap solo attack. Even at that young age, he was that fast. During that summer at each town I raced in, I would watch George race in the 14-15 y.o. race, the 16-17 y.o. race, and then finally the Senior Men’s category 4 race all one after the other. He would win each one with less effort than I put into a riding on a rest day. I would later find out that he was only 13.

With the Tour de France less than a month away, I sat down with Big George (by phone of course) to get his take on a few things.

RS: You’re from America where bike racing isn’t the average high school sport, what got you started?

GH: My dad raced for a long time and so did my brother, so I just kind of followed in their footsteps. In my family it was just kind of the natural thing to do.

RS: How old were you when you started racing, and at what age did you decide to take it seriously?

GH: I was 10 when I started racing, but I didn’t really make it my main focus in life until I was 14.

RS: You’re from the NYC area which isn’t exactly know for it’s quiet roads, what was your daily training like?

GH: On my daily training rides I would ride to the local state park, and do laps on the 4 mile hilly circuit. I would also do several sprints. My dad always promoted a healthy competitive atmosphere between me, my brother, and himself. He would come on the rides with us whenever he could. On the weekends in the spring I would race in Central park, and Prospect Park. The races would start at an ungodly hour, and the sun wouldn’t even be up by the time we started the race. They had to have the races so early, because we had to be out of the park by the time joggers came in.

RS: You turned pro at a young age, when did you feel that you had made it as a pro?

GH: I was fortunate enough to always be on a team that always supported me, and had great world class riders to learn from. I feel like I have been on a steady progression ever since the Motorola days. So I guess I felt like a pro right from the start. 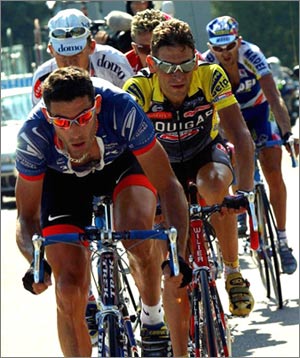 RS: Including your amateur days, what would you consider your proudest moment?

GH: I would say finishing the Tour de France with Lance in the yellow jersey for 4 years. Also winning the US pro championships was a great day.

RS: With the results that you’ve shown, I’m sure you have had plenty of offers from other teams over the years. What made you stay with an American team all of these years?

RS: I know that racing can put quite a high demand on someone’s personal life. How do you balance friends, training, and a girlfriend with such a busy schedule?

GH: I’m fortunate enough to have a great family and a great group of friends that have always been by my side, and especially in the last couple of months when I was sick. (George chuckles) The girlfriend on the other hand I’m still searching for. It’s about time that I settle down. After all, (George chuckles) I’m getting old.

RS: Speaking of being sick. You were quite sick this spring, and when you came back to Europe you immediately placed 7th in the tour of Belgium. How did you finally get healthy?

GH: I sought the advice of various professionals that have had experience with hard to diagnose ailments. I ended up getting treated by a doctor who specializes in oriental medicine and natural therapies. That’s what really got me on the road to recovery. His name is Dr. William Pettis from Memphis, and he is a great friend now. I would recommend him to anyone who is having trouble with traditional treatments. 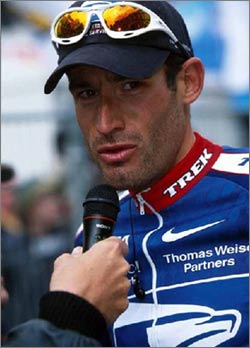 RS: Your approaching 30 years of age when a lot of riders start to map out there future. How long do you plan to continue for?

GH: There are still a lot of goals and opportunities that are out there. Simply, I still enjoy getting out on my bike training hard, and racing hard. When the day comes that I don’t enjoy it anymore, then it will be time to stop. The rush I get from racing would be hard to get someplace else.

RS: You’re known as one of the leanest men in the peloton, if you could eat one food all that you want and not gain weight from it, what would it be?

GH: (I have barely finished asking the question when George answers) Gelato. No doubt it would be Gelato

RS: Most importantly you have been a professional athlete for 10 years, Playstation or X-BOX, and what is your current game?

GH: (George laughs) Neither, I gave my X-Box to my teammate Dave Zabrinske.

George will be part of the U.S. Postal team that will be racing in a very special Tour de France. It will be the 100th anniversary of the first tour, and it will also be Lance’s drive for five, which if successful will place him on the same shelf as Indurain, Anquitel, Hinault, and the Legendary Merckx. I know that we all look forward to watching George and the rest boys. GO POSTAL!