Last week we got personal with George on Paris-Roubaix, winter fitness, and the always interesting Daily Distractions. But there was too much for just one cubicle-bound read, so here’s Part 2 – with glimpses of Life in Europe, what George really thinks of teammate Michael Barry, and of course the PEZ Speed-Round… 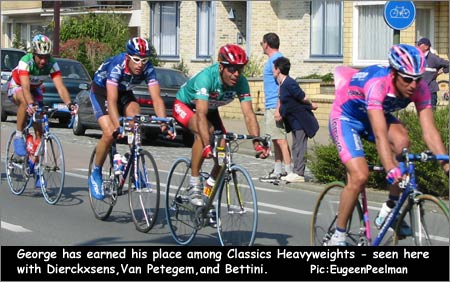 PEZ: How how much time do you spend overseas now?

George: February to May, then I spend May in America, them from June to September we’re in Europe, and then the winter here. I lived in Como Italy for 3 years, but I prefer Spain more. I really like Nice (France) also – it’s beautiful.

PEZ: What about the differences between the “indigenous” European people?

George: I find the people in Spain are a lot more laid back than in Italy, which is more my style. 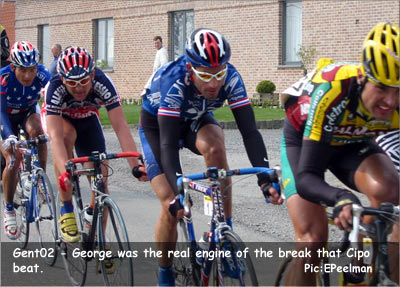 Future & The Family Business?
PEZ: Right now you’re really riding along at a zenith of your career – have you given any though to what you might do after racing?

George: Well, I’m hoping the company goes well and we can expand and do more things with that. I’ve met a lot of people in my career that I might be able to work with some day, so I have some options out there…

George is involved as a technical advisor with Hincapie Sportwear, the hot new line of technical riding apparel started by his brother (and former racer) Rich Hincapie. His current sponsor commitments prevent his active participation in the company right now, but you know he’s got some influence there somewhere… PEZ recently reviewed the Hincapie WindTex jacket… nice stuff!

PEZ: Would you like to stay involved in the cycling industry somehow?

George: It would be nice, but I’d want to limit my travel and stay home more… have a family and all that…

PEZ: You’re now 30 years old, do you have an idea of how much longer you’ll keep racing?

George: Well, this will be my 11th year as a pro, so I’ve been pro for a while… I’d like to race for another 5 years…

PEZ: Does any aspect of racing become tiresome or a grind?

George: Well, at the end of the season you’re definitely tired and the training comes …harder and harder, and there are times when you don’t feel well, so the training is tough, and you get tired mentally…. But when you feel good training goes by quick and the racing is good – at that point you really love it.

PEZ: As a pro with so much experience now, is racing still “fun” for you?

George: Yes, racing is fun – it’s fun when you’re going really well. Now it’s a lot of fun. In my early years, I really struggled because the races were so hard for me, everything was so new, a different country. I had a hard time in my first 3-4 years….I was counting the days away from home, I hated it. But after that I really got used to the lifestyle in Europe, and really made a home there, which is comfortable, and that’s really helped a lot. 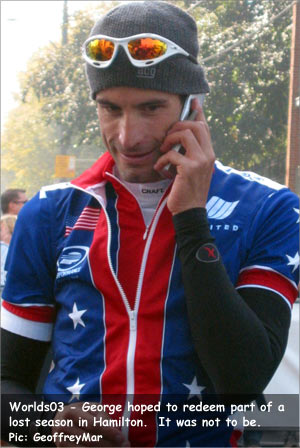 George: This year the Tour was special. It was so close, and I probably felt the strongest that I ever have. There were a lot of moments that we had with the teams that were unforgettable too…

PEZ: You were seen working at the front on a lot of the climbs at this year’s tour, looking really strong – are you becoming a climber?

George: This year I felt really strong, I’d done a lot of work on the climbs beforehand – and it seems like every year my climbing is a little better, and obviously I’m not a climber, but at the Tour especially towards the end of the race I seem to do better on the climbs. It also helps to take some of the pressure off the other guys..

George: Try to train correctly and really have a lifestyle that allows you to recover and benefit from all that hard training, A lot of young people just go out and ride their asses off and party a lot, and do things that totally contradict what you’re trying to get out of your training. So have a good lifestyle, and rest as much as you train.

What About Michael Barry Anyway?
PEZ: We talked to Michael a few weeks ago, (read the interview here) and he expressed his interest in riding some of the Classics. He was the highest place North American (7th) at the World Championships, on a tough Classics-style course. What are your thoughts on Mike and the Classics, would he be a good guy to have on your classics team supporting you? 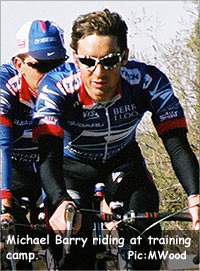 George: Yeah definitely. Michael is a very strong rider and he’s got a lot of attributes that a Classics rider needs – he’s fast, he can position himself well, and he can climb well, he’s a good all around rider – I think it would be great to have him there… I think he mentioned that he might want to do the Spring races, so I’d be all for that…

PEZ: Which race (at any time in the year) do you think Michael is best suited to win?

George: Good question… I think he’s got chances in some stages of the stage races for sure because of the type of rider he is. And the World Cups, I think we just have to wait and see because he hasn’t done so many of those races yet… Last year was a break through year for him and this year will be a good year for him to do more of the races and see which are best for him.

The PEZ Speed Round

PEZ: Creature comforts – when you’re traveling and away from home for a while, what can’t you leave home without?

PEZ: So what’s on the I-pod playlist right now?

George: I have several different playlists haha – actually my computer harddrive got wipe out, so right now I’m starting from zero… I have a lot of rap, heavy metal, depends on what mood I’m in when I train. I like a lot of different kinds of music.

PEZ: And lastly, one of the Pez crew – Dave Berson – lives in Philly and wants to ask if you’d come to his house party after the Philly Core Champs – he’s got a great place just behind the art museum…

PEZ: George – thanks very much for talking with us and great luck this year – we’ll be looking for you on the podium at Roubaix!

Read Part 1 of the PEZ-rap with George

Get More Info on George, check out:

Pro Shop – Off to the Races