When was the last time your computer read 63.5 kph? Down a hill? behind a bus? on the rollers? If you want to win the Olympic team pursuit title, that’s the speed you need to sit at – but it’s “only” a 61.7 kph average from the standing start!

Welsh Olympic gold medallist, Geraint Thomas of Barloworld and GB last spoke to Pez at the Giro. We tracked him down to his home in Wales a couple of days ago, after he returned from Beijing to discuss what it takes to ride four kilometres in 3-53. 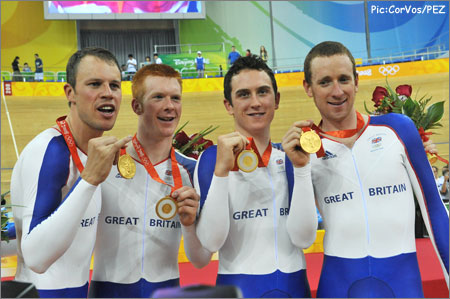 PEZ: Robbie Hunter will be expecting stellar lead outs, back at Barloworld!
Geraint: Definitely! I haven’t seen him since the Olympic road race, but he texted me to congratulate me, most of the team did, actually. I’m looking forward to seeing them all and getting back into riding the road and enjoying my racing without the pressure of the Games in the background. We’re riding the Tour of Britain, so that’ll be good. 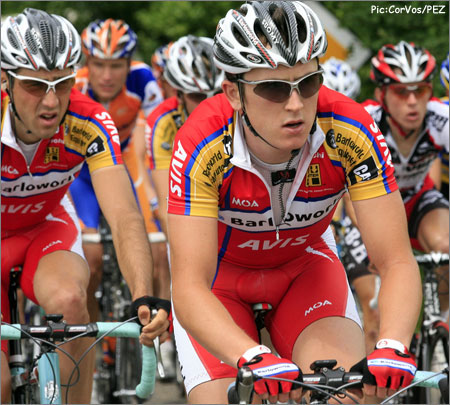 PEZ: How did you come out of the Giro?
Geraint: Really good, I was 12th in the last time trial and I felt so much better than I did after the Tour in 2006. I don’t know if I noticed the difference after the Tour last year, but I definitely notice it this year; I have more strength in depth now. 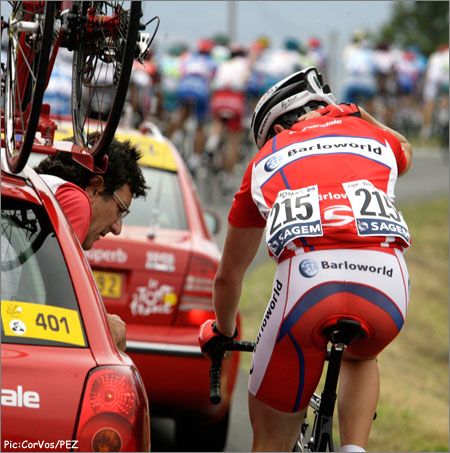 Geraint tending to water duties in the 2007 Tour de France.

PEZ: Can you remember your first team pursuit?
Geraint: I was in the junior squad when we broke the British record with a 4-23, then we rode the Junior Worlds, in Moscow with 4-22; it’s come on a bit since then!

PEZ: Tell us about training.
Geraint: The coaches break the event down into it’s constituent parts: the start, changes, leg speed, recovery and so forth. We’re lucky with Ed Clancy, he does our first lap-and-a-quarter, he gets us up to race tempo within that period – he’s a key factor in our success.

We always train at race cadence – around 130 rpm, but we may lower the gear a little so we’re training ‘over’ revs. We do a lot of drills, practicing changes, again at above race pace, from a flying start. Drills are the secret really, ridding together all the time, so you know each other’s strengths and weaknesses. 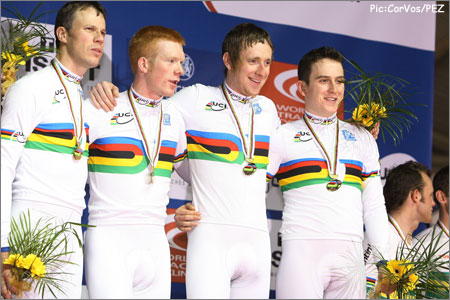 PEZ: What about the “superbikes?”
Geraint: Yeah, you definitely notice the difference, they feel stiff and respond very well; you feel that every bit of effort is being used to make you go fast, nothing wasted.

PEZ: Give us an example or two of the ‘attention’ to detail we hear so much about.
Geraint: The bikes spend a lot of time in the wind tunnel, they tweak them all the time. But it’s all the little things too, like our nutritionists have us drinking a lot of cherry juice after afforts – it aids recovery. Everyone is encouraged to think ‘outside the box’ to find an edge.

PEZ: How about changing with double discs?
Geraint: It’s second nature now; it’s awkward the first time, but you just get used to it.

PEZ: What gear were you on?
Geraint: 106″ – it’s pretty tough to get it wound out, but at Beijing with the short steep bankings and long straights, it was easier than at Manchester where you have longer bankings. With the steep bankings, you get fired into the straights. 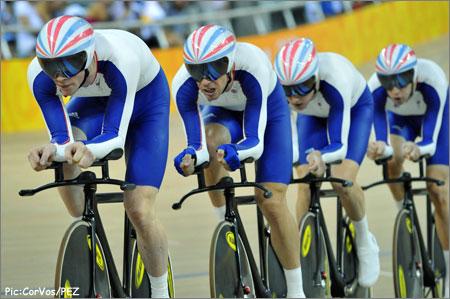 PEZ: When the Danes did 3-56 in round two, did that shock you?
Geraint: No, we were more surprised when they only did 4-02 in qualifying. When thay did 3-56 in the second round, we thought; “well, we’ve got a bit of a race on now!” But to be honest it boosted us too, because it let us see the real speed potential of the track. We won the Worlds and broke the world record, so we’ve been on a high; we just kept riding the wave.

PEZ: Do you notice the difference, at say 4-03 tempo compared to 3-53 tempo?
Geraint: Yeah, definitely. You notice the difference between 3-56 tempo and 3-53 tempo. It’s like anything you are doing a lot, you just feel it. I knew we were going quicker in the final, we scheduled 3-56, but were up on it right away. The track at Beijing was a big help, the transitons were very fast and forgiving; if you got the change a little wrong, the transition pushed you into the straight, so you could run past the wheel and make an adjustment. 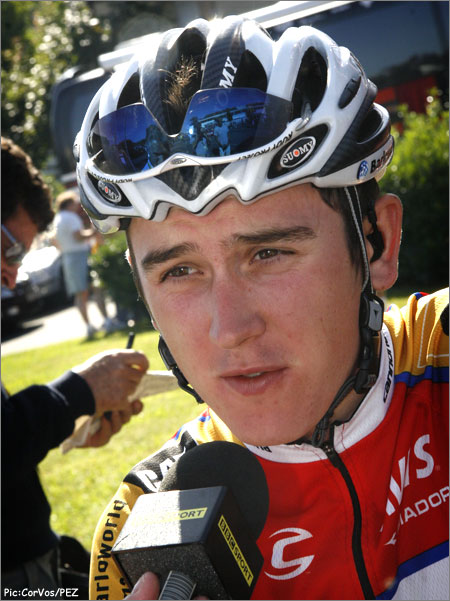 PEZ: What’s the media side been like?
Geraint: Manic! I came home on Friday, without anyone noticing, but when the rest of the team came home on Monday, it all kicked off. We’ve been getting so much attention, you expect your family and friends to be pleased for you and make a fuss. But to see thousands of people that you don’t even know, and you’ve made them feel so happy because you’ve won, that’s nice, that makes you feel chuffed.

PEZ: Max Clifford the English PR ‘guru’ says he’ll make Chris Hoy Ј1 million per year, for the next four years.
Geraint: I’ll need to have a word with him! I haven’t got a personal manager yet, but it’s something we’re working on just now. The press officer at British Cycling has been working with us, but I haven’t been approached regarding any endorsement or the like, yet. 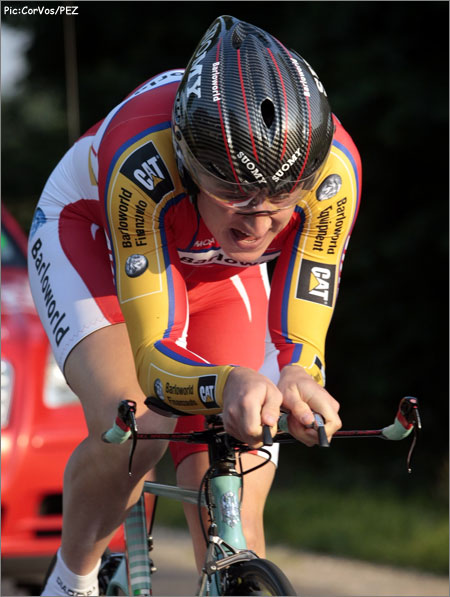 PEZ: When do you rejoin Barloworld?
Geraint: For the Tour of Britain, then I have a couple of one day races in Italy, then Paris-Tours and that’s it for 2008.

PEZ: 2009?
Geraint: I re-signed with Barloworld after the Giro, but we have a final meeting just before the Tour of Britain. As far as I’m aware, all the moneys are in place for the team for next year.

PEZ: At the Giro, you said that you’d be concentrating more on the road now.
Geraint: Definitely. I’ll do work for the Commonwealth Games in 2010 and I’ll ride the track in the winter, I live in Manchester, after all. But I want to target stages in Tours and there are single day races I’d like to win.

PEZ: Has Steve Cummings (Geraint’s GB & Barloworld team mate) winning the Coppa Bernocchi, inspired you?
Geraint: It gave me a real buzz, he was gutted at not making the team pursuit squad for the Olympics; he wasn’t on a good day for the road race (dnf) but he rode well in the time trial (11th). I was really pleased for him, but it also let me see what’s possible.

With congratulations again and thanks to Geraint for taking time to talk to Pez at a very busy time for him.