With stage wins for ‘Eddy’ Boasson Hagen and Bradley Wiggins, the Bayern Rundfahrt would have been a success for Team Sky by any measure; but as well as the two stage wins their ever improving track and road star, Geraint Thomas grabbed the overall win – in spite of doing Trojan work for team sprinter, Boasson Hagen.

A clutch of medals in the British junior track championships in 2003 announced Thomas’s arrival; within a year he was world junior scratch champion on the track and had won the junior edition of Paris-Roubaix.

The following year he was British senior scratch champion; had won two UIV cups (U23 six day races) and was performing well on the road.

By 2006 he was European team pursuit champion and had a silver medal in the same discipline at world level – a stage and GC win in Luxembourg’s Fleche du Sud showed that his road talent was also building nicely.

In 2007 Thomas signed with Claudio Corti’s Barloworld and ended the year as the youngest finisher in that edition of the Tour de France and as world team pursuit champion.

Olympic year saw him still with Barloworld and taking Beijing gold as a member of the fastest squad ever, with the world title successfully defended along the way – his Grand Tour experience was further extended with a ride in the Giro.

The highlight of 2009 was an (albeit short lived) world record 4:15 for the individual pursuit – but no Grand Tours due to Barloworld not receiving invites.

Joining Sky last season he rode a strong Dauphine and an excellent Tour, the latter whilst clad in the jersey of British elite road race champion.

This season already has seen the versatile man from Cardiff back on the boards at the World Cup in Manchester with team pursuit gold and individual pursuit silver the result.

The day after a tough Tour of Sardinia he took a strong sixth in the Classica Sarda before riding a highly visible Paris-Nice where it was his lead out skills which guided team mate Greg Henderson to his stage win.

An excellent second place behind Saxo Bank’s ‘back from the dead’ Nick Nuyens in Dwars door Vlaanderen sealed a great start to 2011 for the man they call ‘Gee.’

After his excellent 2010 Tour, his build up for the 2011 edition couldn’t have got off to a better start with a win in the German stage race which has now been running for more than 20 years.

Traditionally the race is won in the time trial, Maxine Montfort’s 2010 win was built on a strong TT and chrono specialists like Michael Rich and Uwe Peschel are among the previous winners.

PEZ caught up with Thomas as he prepared for his final big test before le Tour – the Dauphine Libere.

PEZ: Congratulations, Geraint – your best win to date?
Geraint Thomas: Definitely – it was mega to win the British and wear the red, white and blue jersey – but this was my first pro stage race victory and it’s a great boost for my confidence.

PEZ: What was the Sky game plan for the race?
GT: Stage wins for Eddy were a priority and my job was to help him – but we wanted to try to get Brad to the time trial in contention for the overall win.

And we really wanted to come in to the time trial with as many of us in the hunt as possible. 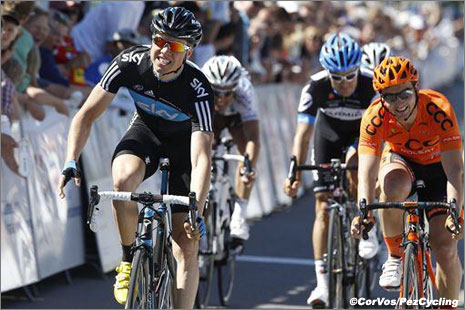 Bayern got off to a good start for Team Sky with Boasson Hagen’s Stage 1 victory.

PEZ: Stage one and Boasson Hagen wins; but a lot of work for Geraint, I would imagine?
GT: Yeah, me and CJ (Sutton) set him up at the end – I did from one K out to 300 metres to go – it was a good start and then we were on the podium every day after that.

PEZ: Stage two; you lost Mick Rogers and Serge Pauwels to illness – that must have made life hard?
GT: Yeah, it was a long hot day on the front!

I’d done altitude training and good work in Italy so it was a bit fatigued but felt strong.

With Mick and Serge not being there it made life harder – we were on the front with 100 K to go but we’re all on the same wavelength and all on song. 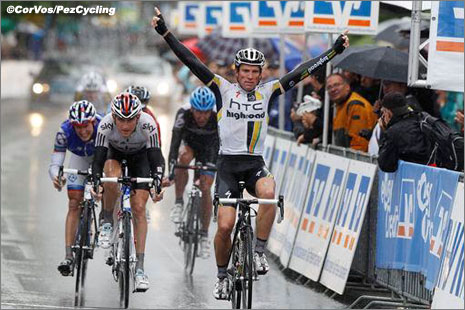 Thomas laid the foundation for his GC win with second place on the Queen Stage of this year’s Bayern Rundfahrt, which was won by eventual runner-up, Michael Albasini.

PEZ: Stage three; you made the break, took second on the stage and the jersey.
GT: There were a lot of attacks, we weren’t going to ride on the front but there was a split on a climb of maybe 35 and from that the break of eight formed.

It was hard racing all day, in the cold and wet – but coming from Wales, I’m used to that! 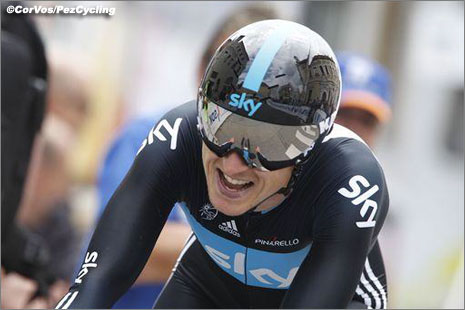 The groundwork was laid in Stage Three, and the deal was sealed the next day in the time trial.

PEZ: Stage four was the time trial and you were fifth despite all the work you’d been doing.
GT: I felt I’d recovered quite well and I really attacked the course – in fact I over-shot one corner and lost maybe 10-15 seconds, but I was getting time checks so knew that I was safe.

PEZ: Brad was flying.
GT: Unbelievable, he put a half minute into Cancellara over 27 K – I knew he was going well after training with him in Tenerife, but hadn’t realised how well. 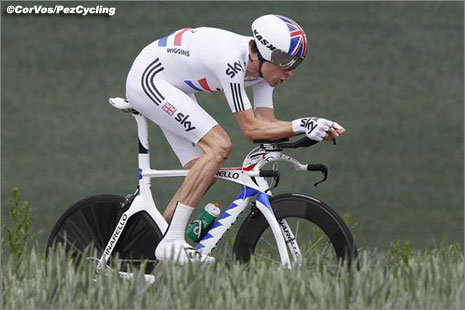 PEZ: Stage five; and you had to defend.
GT: To be honest, it wasn’t too bad – the other teams had seen that we were strong and didn’t bother; and we got help from one of the German teams.

Eddy and CJ didn’t ride – we were setting things up for Eddy for the sprint.

PEZ: No radios in Bayern.
GT: It’s a bit of a pain when there’s a puncture or you have to go back to the car for bottles or with a cape – but the team has gelled and everyone knows what they’re doing. 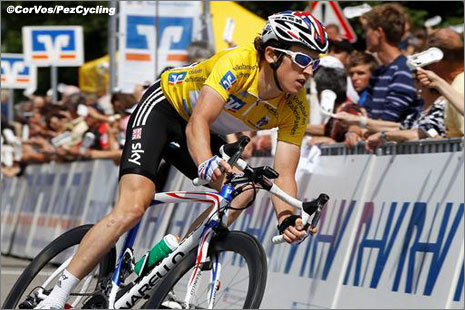 PEZ: It’s a different team, this year.
GT: We all know each other, we know how each other behaves and there are strong bonds – the classics team are all genuinely good mates and communication is very good.

And the support staff has improved so much in the last year, too.

PEZ: Leopard Trek is getting all the attention this year that Sky got last year.
GT: Yeah, I guess so; they’re the new team on the block with the big names – Cancellara and the Schlecks.

Every move they make is analysed, it was like that for us last year; we were the new team with the big budget – I think it will be next year before we see the best of Leopard.

PEZ: What’s your programme now?
GT: I ride the Dauphine and then Nationals – the Dauphine is my last race in the champion’s jersey.

PEZ: You’ll be trying to keep it?
GT: It would be nice to keep it; as soon as you step off the bus you feel a bit special and proud to be representing your country.

It noticeably brings up your level of performance – so yeah, I’m gonna try to keep it. 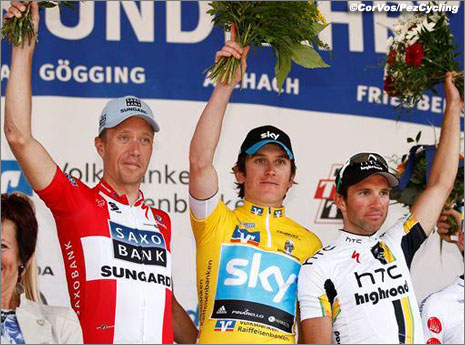 PEZ: I hate to mention it, but what about the Tyler Hamilton revelations?
GT: It’s a bit shitty, it’s not like him and Landis are doing it for the good of the sport – all of this stuff isn’t good for cycling and there’s so much more that the media could be focussing on.

The damage is done but throwing all that dirt at Armstrong isn’t for the best – he’s been such an inspiration to so many.

Like I say, it’s sad because there are so many positives that the media could concentrate on and the sport has changed so much even in the time I’ve been involved in it.

The performances that riders like me, Christian Vandevelde and Bradley have produced are inspiration to the kids – much of the stuff which the UCI and WADA leak just does damage. 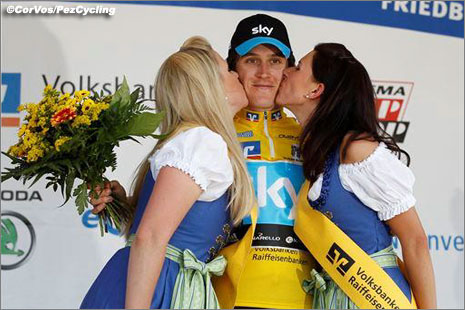 There will be many more of these to come.

PEZ: Your goals for the Tour?
GT: The team time trial is our main one, the team which wins that is in with a good shout of grabbing the yellow jersey.

We have Eddy for the sprints and we’ll be trying to get Brad as far up the GC as we can – and if a chance comes along for me then I’ll take it.

But the big goal is the TTT.

***
With thanks to Geraint for his time and insights; wishing him all the best for the Dauphine.

Toolbox: In Praise of The Rat