Gilberto Simoni: “Pink Goes With Everything!”

So said 2-time Giro winner Gilberto Simoni during this week’s Saunier Duval-Prodir training camp. We had the opportunity to interview the Tour stage winner and new boy with his first team outside of Italy. “Gibo” had returned from a 6 hour ride that very morning but seemed no less willing to offer his thoughts.

It’s All Good
In what will most likely be Simoni’s last season in the professional peloton I was eager to look back at his 12 year career I wanted to know if anything stood out, any moments or incidents. “I find it difficult to find one incident that stands out to me. There have been many beautiful moments but of course, my first maillot rosa will always stay in my memory.” he said. “Every year something changes, a new team, new team mates, new management. For this reason it is difficult to remember particular events”.

Simoni and David Millar lead the troops on a training ride in Murcia.

No Cunego? No Problem!
However, one saga that will certainly protrude in the public memory was the spat between Simoni and his erstwhile team mate Damiano Cunego. The event was hyped in the press but what was the real story? At the risk of stirring up discontent, I could not pass on an opportunity to find out his most recent thoughts on the situation. “I don’t resent the press, it was not because of them” he said. “Now I’m on a new team, and Cunego is no longer a problem for me.” So Cunego was indeed a problem, and a new Spanish team has provided a means to diffuse it but he was unwilling to comment further, wishing to draw a line beneath the proceedings.

Reunited We Stand
At Saunier Duval-Prodir, Gilberto is once again under the direction of Pietro Algeri, his director sportif at Lampre in 2001 when he took his first Giro victory. How does he feel about this? “At this point in my career, this is the best move for me, it is the best motivation I could have”. said Gilberto. Despite being back with his old mentor, there is no denying the fact that Simoni is now a foreigner in a foreign team. Is the culture in a Spanish team different? How is this affecting him as a rider? “The culture here is different but there is no pressure from outside the team. In Italy, on an Italian team there would be pressure to perform, to be competitive from Milan SanRemo onwards. Here at Saunier, there is no pressure, I can use it as preparation for the Giro d’Italia. The atmosphere is perfect, perfect for my objectives”.

And What Of Millar?
Simoni will not be the only big hitter at Saunier Duval. One signing of particular interest to the English speakers is David Millar, still officially under a ban but set to make a comeback at the Tour de France. What did Gilberto think of the Brit? “I am very happy to have a team mate like David Millar because he could bring the team great satisfaction at the beginning, perhaps with the yellow jersey which would be the best way to start the Tour de France!”

Winter Form
The questions turned to his preparation. I saw Simoni riding with the team, and when the road began to rise it was clear that he was comfortably holding his own. However, this was not arbitary. “When I arrived at the first team meeting, I was unsure of my condition” he said. “Because of the weather and the temperature back home in Italy I had not been able to train often. I have been pleased during this camp to see that my form is improving every day. I am very happy.”

California Dreamin’
One of the early races of the season for Gilberto and the rest of the team will be Stateside in the Tour of California. Whilst it is not on the ProTour calendar, the race is important for the team and for Prodir, the second sponsor which takes over title sponsorship from Saunier Duval for American races. What are Simoni’s sentiments concerning the event and his participation? “California is another eight day stage race. It is a beautiful race and I want to develop my condition during it. I would like to be competitive but it is not for sure. The main objective is the Giro but I will go to California for certain.” Relatively speaking, it is not very often that big name professionals from Europe compete in races in the United States so I was keen to seek Simoni’s impressions of the US. “I’ve been to the Las Vegas bike show (see our interview here) before” he said. “I have a lot of fans over there so I would like to be competitive but I can’t forget my Giro preparation.”

Peak And Hold
Last year was good but not great for Simoni. With the new team and new start that he spoke of, what changes were going to take place to ensure this final season would be one to remember? “Last year my form was like a roller coaster, up and down all season” he continued “it was up at Paris-Nice then down, then up at the Giro then down, then up at the end of the season. This year I want to improve my form gradually all the way up to the Giro d’Italia then try to maintain it for the rest of my season.”

Quite clearly, the Giro is Simoni’s main objective, but will the Italian have any other goals with the team? “Perhaps after the Giro, the stage to Alpe d’Huez in the Tour de France” he replied with a smile.

Training Philosophy
Earlier in the camp, I spoke with team doctor Inigo. When I asked him about how he was working with Gilberto, he explained that Simoni has a very good understanding of his body and what it requires through years of experience, twelve years in the professional peloton in fact. So is Simoni of the “new cycling” or the old? Does he train scientifically? “No, no, not at all. Absolutely not in the scientific way.” So why not? “My behaviour is not linear. I am always changing something, to perform better, to improve myself.” 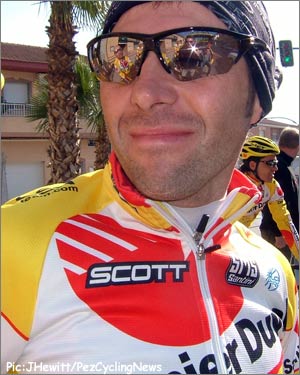 And Now The Important Stuff
As our time was coming to an end, I decided to finish off the interview with some trivially important questions to get a small insight into a Giro winner’s mind outside of cycling.
• His music of choice? “Pink Floyd, some Italian music and U2”
• Pizza or Pдella? I suggested he was diplomatic for the sake of his new Spanish team but the Italian was adamant “Pizza! You can’t eat a different Pдella every day!”
• Espresso or Cappucino? “Cappucino.” the reply.
• Girls: Spanish or Italian? “French! Ha ha ha! No, I’m joking. Italian of course.”

So the future looks as bright as the team’s yellow shorts for Simoni. Speaking of yellow shorts, won’t they clash if Simoni goes on to take the malgia rosa this May? “No, pink goes with everything!”

So with the 2006 season fast upon us, keep a look out for this Italian in his last tour of the professional circuit.