The Giro, Liquigas, space age buses, gorgeous PR girls, Ivan Basso, Vincenzo Nibali, bikes into five figure values . . . But there’s another side to Italian Cycling – Continental teams, getting by, low budgets, no stars, no PR and riders making do as they fight to get to Liquigas Nirvana. Take the Italo/Croatian Meridiana Kamen team, and 28 year-old Englishman David McLean, for example.

And if ‘Meridiana Kamen’ rings a bell, it’s the team where a certain serpent tried to slither back into cycling, last year – before his 12 year ban, that is.

PEZ: Why Italy, why Polla, David?
David McLean: I was on a British team with Italian sponsors for nearly two years prior so I guess there was an Italian connection.

Polla is where the team is based, it’s the only (and I believe first) professional team in southern Italy. 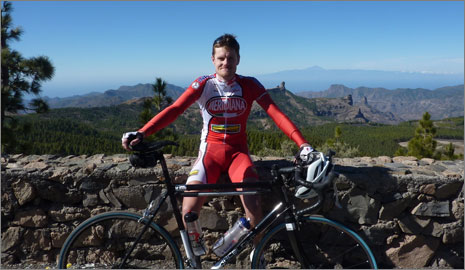 PEZ: Tell us about Meridiana Kamen – is the Croatian registration just a ‘flag of convenience?’
DMc: The team used to be two amateur squads.

A Croatian one and an Italian one; it’s cheaper to register in Croatia than Italy.

Plus the title sponsor (Kamen) is Croatian.

PEZ: And you had a Cobra for a team mate!
I was disappointed that I never got to meet Riccardo Ricco; he never even raced once for us.

It’s hard to get an idea of someone’s true character from translated quotes and news articles.

Nevertheless I get the feeling that his recent ban may have saved his life, I believe he saw and pursued cycle sport in one way and that way simply could not change.

PEZ: The team has an excellent programme – from Costa Etruschi to Memorial Pantani.
DMc: Yup, it’s awesome, although we have struggled for invites so our calendar is a little sparse. 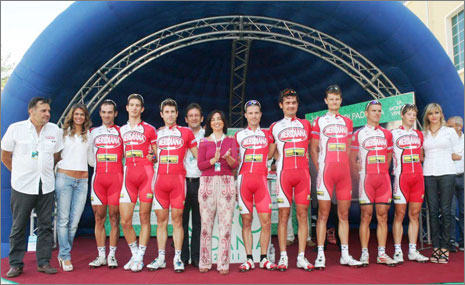 PEZ: Who’s team leader?
DMc: For the bigger races we don’t really have a leader as such, mostly we can rely on the likes of Liquigas and Lampre to orchestrate the race.

Enrico Rossi has won a few 1.1s and is the most experienced on the team. If anyone is leader it is him.

As for me, well, it’s been a disaster to be honest.

PEZ: How did you get the Meridiana ride?
DMc: How anyone gets on any team – by chance!

I broke my collar bone a week before the 2.2 Tour of Serbia last year.

My team went without me but my DS managed to persuade Meridiana to take me on once I had recovered – like I said, pure chance.

PEZ: Do you speak Italian?
DMc: I am getting better but learning very slowly.

Learning Italian in the South is a little like learning English in Newcastle!

(Spock might say of Newcastle dialect; ‘It’s English Jim, but not as we know it!’ ed,)

PEZ: What do you do with your down time in Polla?
DMc: I am writing a book about my cycling experiences across Europe over the last few years.

There was plenty that I couldn’t put in my blog during that time for various reasons.

It’s intended to be written in the same tone as the blog i.e. mainly light-hearted but with some more serious parts, too.

More narrative and fewer race reports and You Tube clips!

PEZ: You were a Kingsnorth Wheelers man, roughing it in Belgium for a while.
DMc: I was indeed.

I ‘graduated’ from the farm (near Gent, where the riders are accommodated, ed.) in 2007 with fellow Englishmen like Steve Lampier, Tom White, Pete Williams and Tom Murray – along with many Aussies and Kiwis.

We were all there for different lengths of time.

It was really good fun and I learnt a lot there from Steve and Tom in particular, to whom I am indebted.

That was the season when I understood the appeal of European racing and really caught the bug.

The terrain and style didn’t suit me there though (no wins, lot’s of placings though), hence why I moved down to the Alps a year later, that and the fact that it wasn’t a very professional setup – read: ‘unhygienic and disorganised!’ 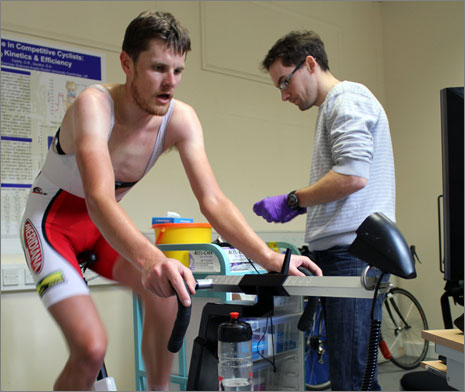 PEZ: And then Sprinter Club de Nice – how did that go?
DMc: It was a step up in terms of seriousness for me, but the quality of racing was probably lower, I broke my collarbone and made many mistakes.

I learnt a lot but by the end of the season I was cleaning up in the small races.

It was time to move on.

PEZ: To ASPTT Mulhouse – it’s hilly round there – any wins?
DMc: Mulhouse was a whole different experience; the racing was much tougher again.

We mainly raced against the best DN1 amateur squads on that side of the country like Etupes, Chambery, Roanne, St. Etienne and so on – but also against plenty of Swiss and German teams and the UCI School of Cycling.

By mid season I managed a fair few wins here and there, I was always improving and riding particularly well in stage races, time trials and on hilly parcours.

My favourite wins from that year were the TT in the Tour Loire Pilat and the GP de Golbey.

PEZ: Then home to the UK where you rode the tough Scottish Doon Hame stage race for Pasta Montegrappa.
DMc: I felt that I had served my apprenticeship in Europe so I came back to the UK in 2010.

At the time I felt that I deserved to be on a UCI Continental team because my results in France justified it.

The problem was that my results didn’t seem to mean anything in the UK, if I were a UK director I probably would have passed me up too.

Also, perhaps age played a part in being overlooked, I was no longer an U23 even when I first went to Belgium, I improved like an espoir though and I’m getting better every year like a young whippersnapper.

Pasta Montegrappa was a step backwards but I was fed up with living alone in a hotel in a foreign country; ultimately it has led me back out here to Europe again though, so a good decision in hindsight.

I don’t seem to ride well in the UK Premier Calendar, even a race like Doon Hame (won mainly on sprints the time I did it) I always found it hard to make an impression.

The way the talent is condensed into only a few teams always made it a crapshoot for me.

I am certain I am capable of doing well in one though, under the right circumstances. 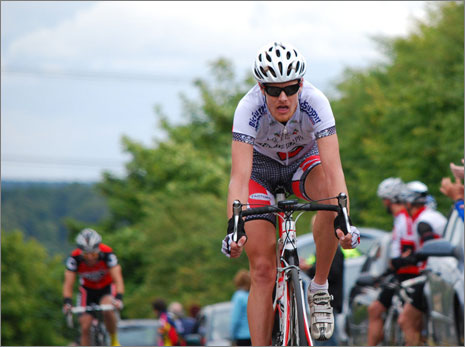 PEZ: What’s your career-best ride?
DMc: I’ll tell you when my career is over.

PEZ: It sounds as if the budget is tight in Italia?
DMc: Italy is financially in the toilet right now, combine that with the fact that cycle sport has been in slow decline ever since Fausto Coppi died and you have a problem!

Cycling here lives on its romantic past even though modern bike racing bears little resemblance, there are no feats of heroism on a bike anymore; football is king here now.

Since 2008 however it’s become much worse; teams and races are folding left right and centre.

Here in the south many of the houses, business and shops are ruined and empty, particularly in the mountains.

Sports sponsorship is the least of anyone’s worries; it’s a luxury for businesses to sponsor teams.

It just isn’t a cost effective way to advertise, I get the feeling that teams are, and forever will be little more than macho executive toys to many, right from Riis’s BMC to the small Continental teams.

PEZ: Is that area ‘heartland’ for races?
DMc: Italy is beautiful and undoubtedly a heartland of cycling, particularly the north.

I appreciate every 1.1 race I do here, I’m very fortunate to be doing them.

I really enjoy the history attached to the races and the tifosi.

They’re different to the Belgians (who are mainly just drunk and insane – also good).

In Italy there’s a kind of reverence with which they hold all the riders but especially the big stars.

PEZ: Your programme is surreal – English club time trials then jousting with Basso.
DMc: I try to put all my results both big and small on my results sheet.

This is mainly because I’ve absolutely no idea what directors are looking for when picking riders for the following season.

I managed to get a large private sponsorship this year partly on the basis of an evening 10 mile time trial result a few years ago where I beat British champion Michael Hutchinson by a single second! 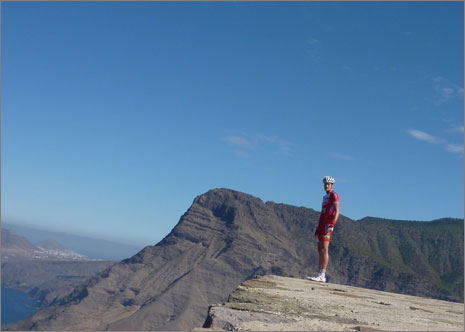 PEZ: You wrote in your blog that you weren’t that impressed with Sr. Ballan.
DMc: Some riders are just so physically talented they never seem to learn the other parts of being a bike rider.

I’m the opposite of these people, if anything I over think what I am doing, efficiency and tactics are a necessity for me.

Ballan, the Schlecks and Pozzovivo, they could all be so much more than they currently are, I’ll shut up now – totally unjustified arrogance on my part.

PEZ: Who does impress among the Italian pros?
DMc: The riders themselves don’t impress me so much, they are just very good cyclists.

What impresses me about Basso was how he was treated by the Tifosi; at Padania last year he might as well have been the Pope the way they flocked around him.

We just don’t do that in the UK, it’s not in our nature, cycling is far more than just a sport here, its part of the national identity.

Stolen bikes, many crashes, a smaller racing calendar than expected.

The goalposts keep changing and I’m not setting the bar too high given the big jump up in racing I’ve undergone.

PEZ: And is it back to university once the two wheeled love affair ends?
DMc: My contract is up in time for the national champs (for which I may not even have a bike), so it may all be over in the next few weeks unless I find another team.

The love affair will never end with the bike, perhaps it will have to with the racing at this level, there is far, far more to me and to cycling than just racing.

So to answer your question – I don’t know.