The weekend is a time of rest and relaxation for most folks; but not for PEZ’s man in the peloton, Adam Hansen of High Road. Saturday saw him out front for more than one hundred miles and on Sunday he was back playing the locomotive for Cav, as the young Manxman went for another stage win.

PEZ: By my calculations you were out front for 160 kilometres.
Adam: They have a competition for most breakaway kilometres and they announced that it was actually 164 kilometres. 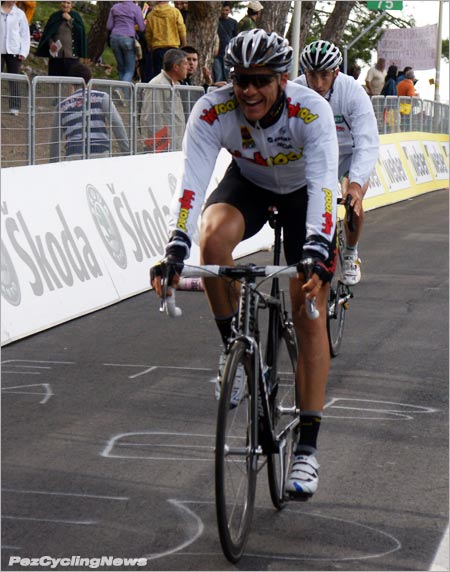 PEZ: Six minutes max isn’t quite enough for an adventure like that, is it?
Adam: Not really, our problem was that Nardello (Serramenti) was with us, he was eighth overall and the QuickSteps wouldn’t let it go more than five or six minutes because he would endanger Visconti’s pink jersey.

When the gap is like that then the sprinters teams will take up the chase at the end – the rule of thumb for getting a break back is one minute per ten kilometres – and that’s exactly what happened.

PEZ: Was there a time when you thought; “this can work”?
Adam: When we first went away I was optimistic because the gap grew quickly, but like I said, we were never allowed to go more than five or six minutes.

PEZ: Does anyone adopt the role of leader in a break like that?
Adam: Not really, every one is thinking about their own situation, no one wants to work too hard and when one guy stops working then everyone else starts to do the same.

It needs everyone at 100% all the way for a break to succeed; I think that even if we had gone faster then the bunch would just have ridden faster too. 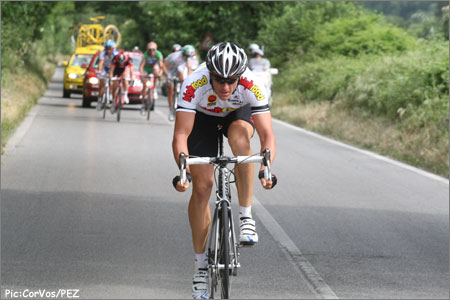 PEZ: What was in your mind when you ‘went solo’ at 13 to go?
Adam: I was told that there was a two-and-a-half kilometre climb to the finish, so I figured I could afford to loose 20 seconds per kilometre – that’s what the top guys take out of in a situation like that – and maybe make it.

But then I turned this corner with five to go and there was this hill!

I knew then that I couldn’t make it, but I didn’t want to just get eaten up without a struggle.

PEZ: Maybe a dumb question, but what was your feeling as they swarmed past?
Adam: At the start of this Giro I wanted to be in a break that went all the way, maybe five or six guys fighting it out at the finish, all getting their chance.

That was my opportunity for that and it didn’t come off, I went really deep to sustain that effort and I won’t get many chances to do it again in this Giro.

My sport director was happy with my efforts though, he was saying that it was only on the climb that the bunch started making serious ground on me, I was holding them on the flat.

PEZ: Any, ‘benefits of hind sights’?
Adam: No, not really, there’s not much I could have done differently, if Nardello hadn’t been there then it would have been better – maybe if I could have re-designed the parcours of the finale; removed that hill!

PEZ: It was ‘back to the coal face’ on Sunday for you.
Adam: There was a hard hill at the end and I wasn’t feeling the best, it was a very hard day for me.

I knew it was a day for Mark, but I was thinking; ‘I hope the other guys can help him!’

But on that climb I could see our guys were coming back through the bunch and Mark was getting a bit isolated, despite the fact that he’s climbing better than I’ve ever seen him.

I thought; ‘I have to help here’ and got with him; we passed McEwen, Brown and Zabel – like I said, Mark is climbing very well.

Over the top we got a train back together but at three kilometres to go I had nothing left. 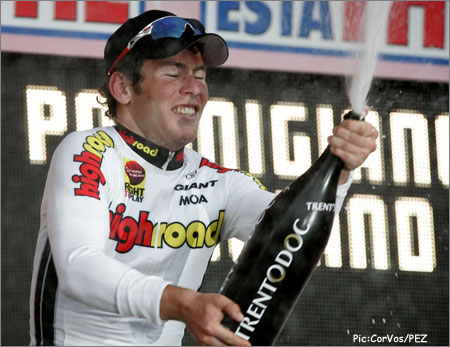 PEZ: Cav maybe doesn’t enjoy the ‘kamikaze’ stuff?
Adam: I’ve heard a few negative things about how Mark rode that sprint, (won by Bennati) but it’s easy to be an expert watching it on TV!

Mark is one of the most fearless guys I’ve seen in a finale, but you have half a second to decide; ‘left or right?’ – if it’s the wrong decision then that’s it; he made the wrong choice and was boxed in.

He’s a marked man now, you can see it on the climbs; the other teams are looking at him and driving hard to try and get rid of him – they know that if it’s a straight line finish then he’ll win.

PEZ: Ricco; doing too much too soon?
Adam: There are two weeks to go and that last week is a killer, but I think maybe he timed things right; the day after that second stage win was a rest day, than the next day is a time trial – maybe not easy, but only 39 K and not as demanding on the body as a long, hilly road stage.

PEZ: What did you do with the rest day?
Adam: We rode tomorrow’s time trial course and I’m glad we did!

Tony (Martin) and I thought that maybe we could get a result, but it’s just so hard – it’s not one for the time triallists; it’s definitely a climber’s course.

The second part of the main climb of the day just goes up and up.

Sometimes if you do a course preview ride and the parcours doesn’t suit you then it’s bad for your mind, but I’m really glad that we rode it.

If I hadn’t seen it I would definitely have gone out too fast, I think that I have an advantage now just because I’ll know how to pace myself, even though I won’t be up there, it will be a climber who wins.

PEZ: Next goals?
Adam: We have a couple of stages to go where I’ll be working for Mark then I think that stages 17 and 18 are the ones where I can try something again.

It’s back to work for Adam and the rest of the field – a ‘chrono’ always re-shuffles that GC deck, keep it Pezzed to see how those cards land.