As the Giro winds around Sicily, PEZ has a man right there in the heart of the peloton; Aussie Elite TT champion, High Road’s Adam Hansen. He took time to talk to Ed Hood after the Cobra had struck on Stage Two.

PEZ: Your personal goals for the Giro, Adam?
Adam: I’d like to make it into a good break that goes all the way to the finish, but obviously I have responsibilities towards our GC guys Marco Pinotti and Morris Possoni – I have to help them as much as possible, particularly in the hills.

I also have to help Mark Cavendish in the sprints.

PEZ: High Road lost the TTT by seven seconds, could you have found those ticks of the watch?
Adam: For sure! We had a tactical problem on the hill, we changed pace too quickly and shelled three riders, we already had two guys just sitting on, so it split the team and meant the 10 seconds lead we had at the first check was lost – there were a lot of mixed emotions at the finish.

PEZ: Did you do much TTT specific training?
Adam: No, we rode together for 45 minutes the day before; sorted out a starting order and that was it.

PEZ: Who were your strongmen?
Adam: Everyone was strong but we showed a lot of inexperience in our changing. The GC guys weren’t doing much and it wasn’t as if we were at the limit all the way.

The trouble is that in a nine man string, if you swing off and ease too much, then the next guy drives through, by the time the first guy tries to get on the back, he’s going nine kilometres per hour slower than the string and it’s very easy to miss the tail of the line. 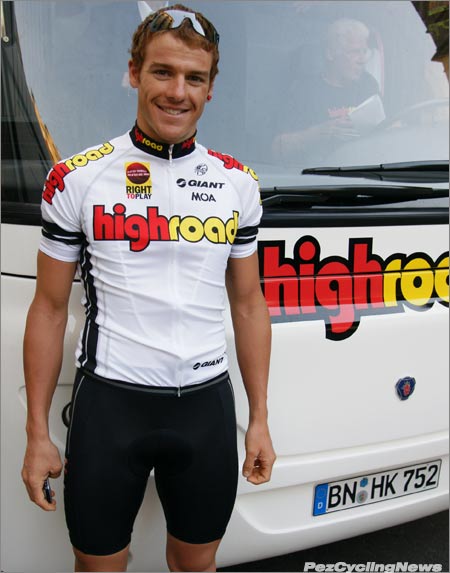 PEZ: Were Slipstream a surprise?
Adam: They were one of the favourites and the rumour was that they had spent a lot of time training specifically for it. They have some strong time triallists in there and good all rounders too – we had hoped to win; but no, the Slipstream win wasn’t a surprise.

PEZ: How is High Road morale after two stages?
Adam: Really good, it’s the same squad as we had for the Tour of Romandie, so we all get along well and we’re having a good time.

PEZ: Only stage two and the GC guys are at it hammer and tongs.
Adam: It’s to be expected, they’ll take every opportunity to try and put time into their weaker or under prepared opposition.

It was a very hard finale today, going in to those last two climbs it was extremely fast.

PEZ: Were you happy with your stage two ride (135th @ 7-46)?
Adam: I was helping the GC guys get into a good position for the finale. When I had done that, I was told to take it really easy to the finish; save energy for another opportunity.

PEZ: Morris Possoni is placed fifth for High Road – surprising?
Adam: No, we expected good things from him; Pinotti is going well too – he was third on GC at Romandie.

PEZ: Is it ‘all for Cav’ tomorrow?
Adam: Yes, we hope he’ll do well in the sprint. He was dropped on the first climb today, so tomorrow we’ve got riders delegated to look after him on the big climb, which comes early – if he gets over that, it’s 100 flat kilometres to the line!