Giro Rider Interview: During a hectic first rest day on the Giro d’Italia, Ed Hood tracked down Dimension Data’s Songezo Jim to get his impression of the 2016 Giro so far. We get the inside line from the South African on the second Grand Tour of his career, how does Italy compare to Spain, life in Europe and his hopes for success.

As the Giro headed south on the first of three rest days we took the opportunity to catch up with Dimension Data’s South African climber, Songezo Jim. The Giro is his second Grand Tour, last autumn he took his slim frame around the Vuelta a España.

Our first question was how does the Giro compare with the Vuelta, thus far?
Songezo Jim: For me personally it has been different to the Vuelta because I’ve been sick here in the Giro so that’s been stressful. But I’m starting to feel better now. The crowds in The Netherlands were unbelievable. There were so many people. The support and vibe of the Giro is something else. You can feel, it’s the Giro. 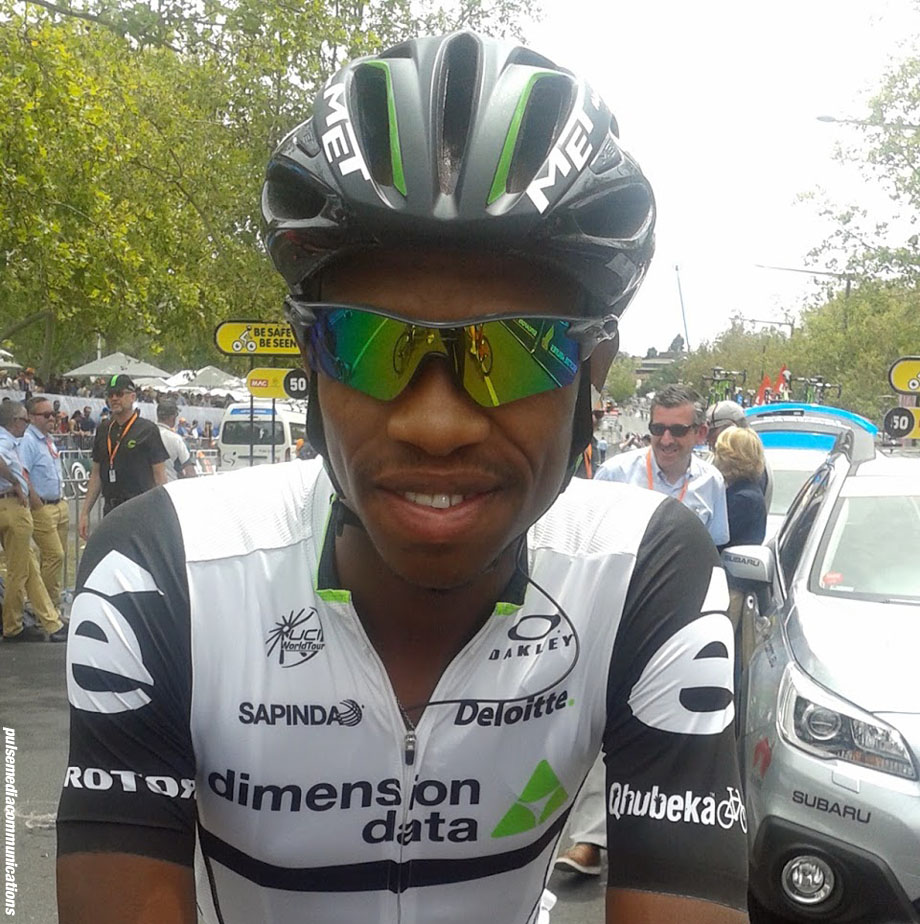 PEZ: How did you come out of that 2015 Vuelta; many say that your first Grand Tour transforms you as a rider?
When I came out of the Vuelta, I made a mistake of not racing immediately afterwards. I came out of the race really strong and wasn’t that tired. I felt like I could have gone for another week. I stopped for a few days and didn’t race for sometime and I was broken after that. As I rider I have grown. My endurance has grown and I feel much stronger than I was. 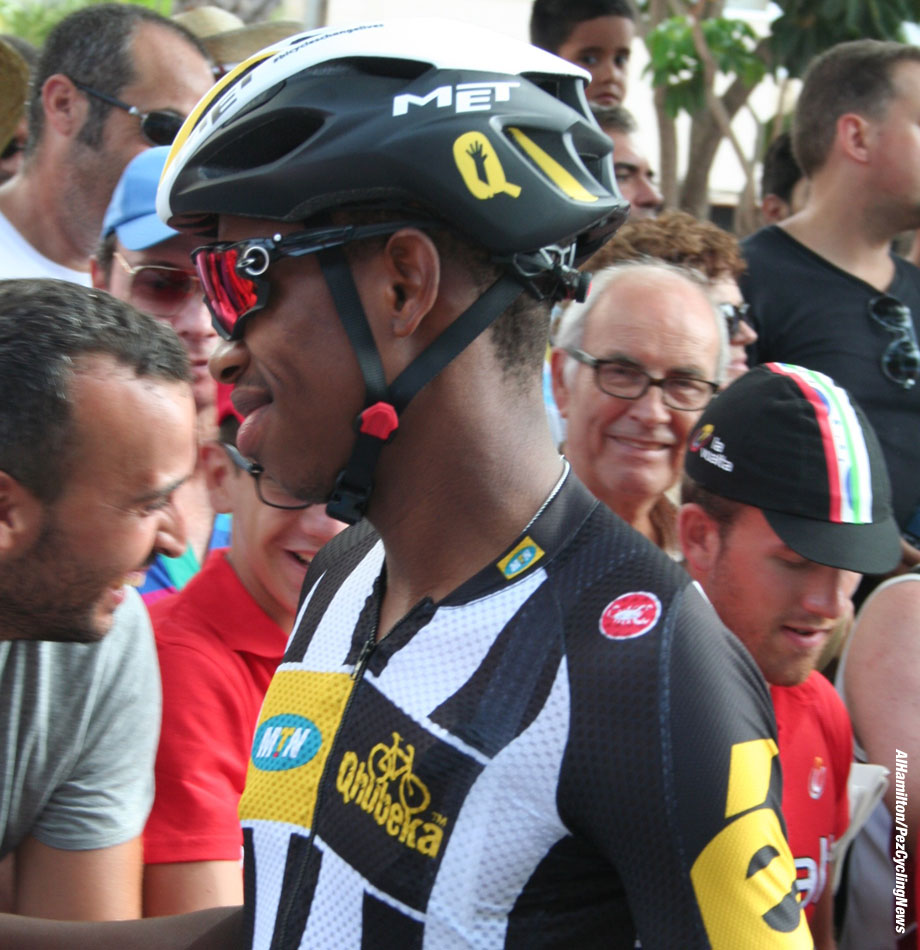 PEZ: The Giro has seemed VERY nervous thus far?
The Vuelta was crazy stressful the first few days. The Giro hasn’t been that stressful compared to the Vuelta last year. The breaks in The Netherlands have been going really easy but now that we’re back in Italy, it took 70 kilometers for the break to go the first day (Stage Four) we’re back. All the Italians want to be on TV.

PEZ: And that long transfer looked horrible!
It was a long day. We drove to the airport then the flight was a couple of hours and after that drove for an hour to the hotel. We had to squeeze in a ride then have massages. It was a busy day to get everything done. 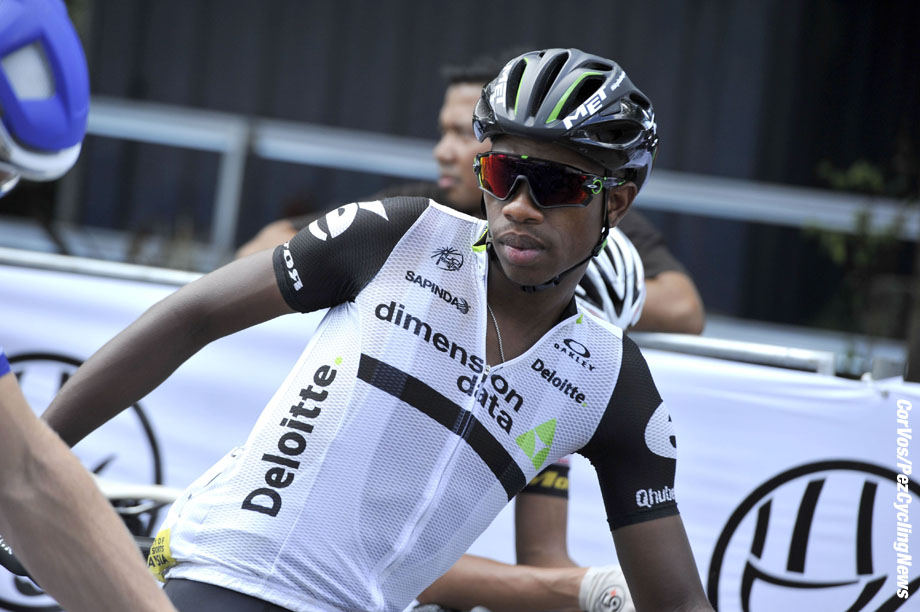 PEZ: What are you ambitions for the race?
My ambitions for the Giro is to try to get a result at some point. I want to get into a breakaway that would stay away. That’s the only way I could get something out of the race. Of course I am here to help the team and contribute as much as possible where I am needed.

PEZ: where are you from in the RSA and how did you get into cycling?
I’m from Cape Town. Some friends at school started cycling and I visited the club they were part of. I was 14 years old. The club gave me a bike to ride only for me to tell them I didn’t know how to ride one. They then taught me over the next few weeks how to ride a bike. I started very late in life to learn to ride a bike. 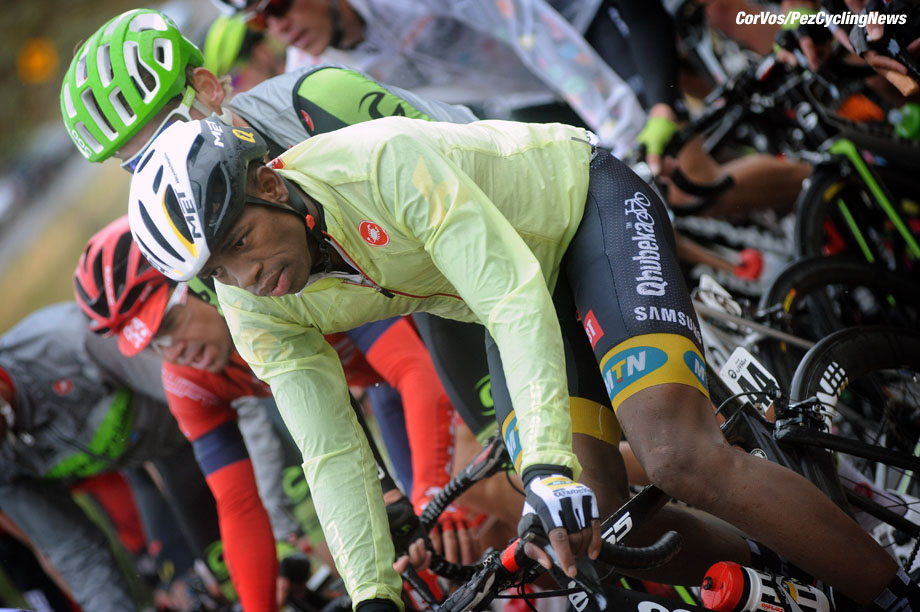 In the rain of Utah

PEZ: How did you get the MTN ride?
I was riding for another South African continental team, Team Bonitas in 2011. Doug Ryder noticed me on the team and approached me about joining MTN in 2012. He told me I’m a good rider and he had opportunities for me to race in Europe. That’s really what I wanted. I moved for the same salary so it wasn’t about money. The opportunities that Doug was offering was very appealing. What we have achieved now showed how serious he was about those opportunities.

PEZ: How has the step up from Pro Continental to World Tour been?
The step up has been stressful and nice. With the WorldTour, it’s all about gaining points so that pressure is there in all the races. As a team I think we have grown in the right direction and hopefully we can bring more Africans into the team in the future. The bigger guys in the team have the responsibility to get WorldTour points and I think that has been one of the biggest differences. 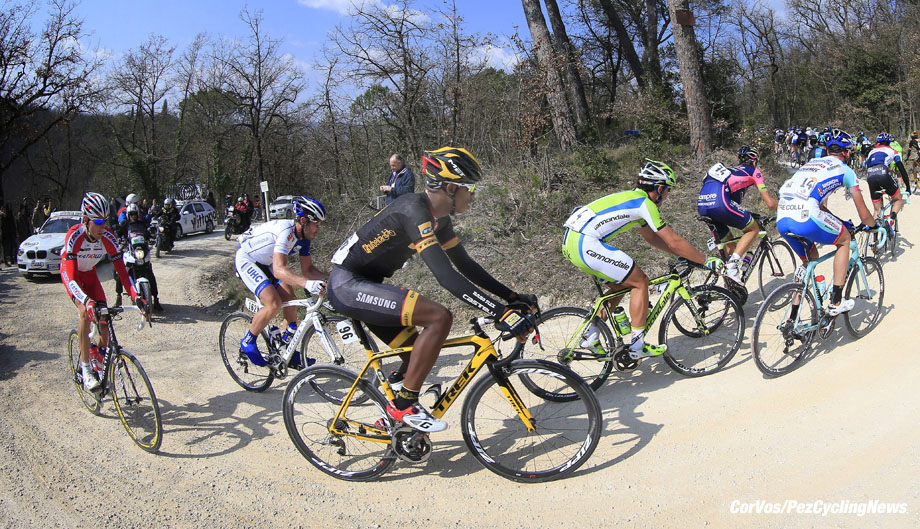 On the gravel of the Strade Bianche

PEZ: Where’s ‘home’ in Europe? and what about our climate?
I live in Lucca, Italy. I really enjoy it there. I’ve been there for three years. I just love riding there. The roads are amazing even though the drivers can be a little crazy. The food and the culture it amazing, they just love cycling in Italy. I could move anywhere in Europe but I wouldn’t want to. Lucca is my home.

PEZ: How big a deal is cycle sport in the RSA?
Compared to the mainstream sports, soccer, rugby and cricket, cycling isn’t that big in the professional ranks. Cycling is still making its way up nicely but we need more support from sponsors. We need to have more teams who have enough support to get young guys to Europe in order to grow the sport more. 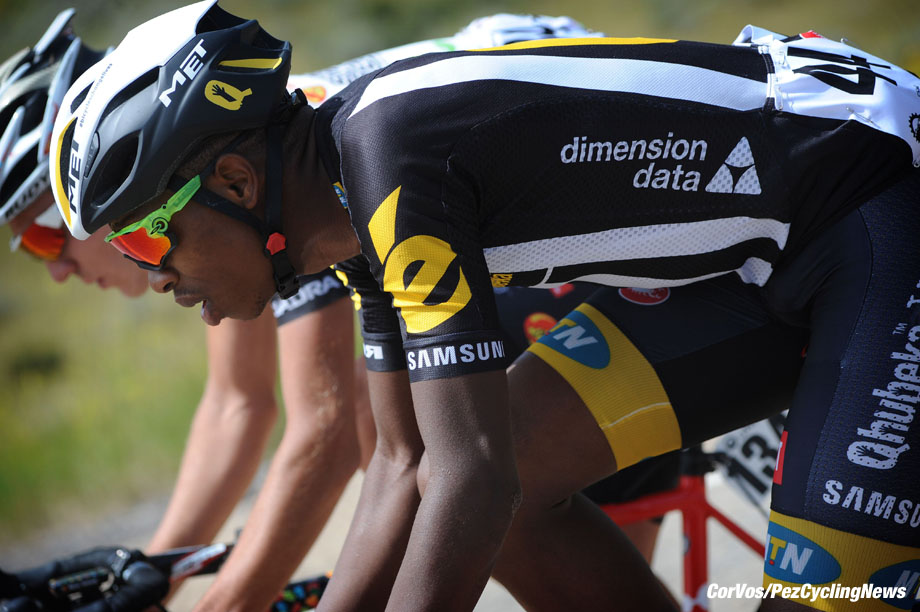 PEZ: As a black African how have you been accepted in the peloton and by the fans?
I don’t have fans first of all, anybody who supports me is my friend. In the peloton I haven’t had any issues. I am friends with everyone. I really appreciate the support I’ve been given.

PEZ: Tell us about your rides in Brabantse in 2016 and the Fleche last year.
In Brabantse we got to the circuit and I wasn’t feeling good when we got there. I had a big race break before getting to the race so I didn’t know what my condition was. I was strong enough but I wasn’t able to go with the accelerations and positioning was very important. I managed to get into good positions and the climbs were very short. I kept making up positions on the descents and was looking after Kristian Sbaragli but he had a bike problem in the final. I had a good race in Fleche. I was feeling good that day. Towards the end there were cross winds and I remember suffering at the back with Stephen Cummings and Ben King. I was happy that I made it through that day in Fleche as I was just starting a big racing block so it was good to feel my condition was good. 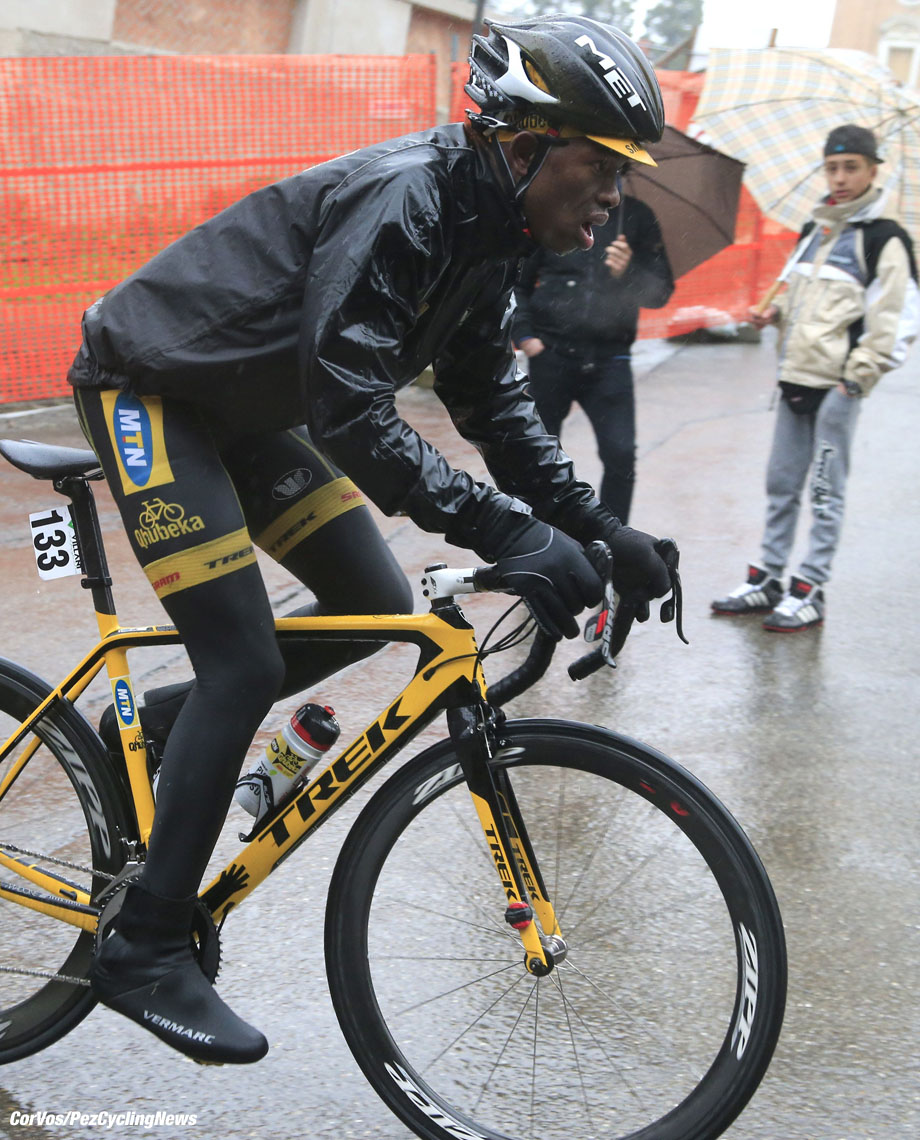 PEZ: What’s your favorite kind of race?
I like short hilly races. Not super steep climbs but good steady climbs that aren’t too long, that’s my favorite.

PEZ: And if you could win just one race. . .
A stage in the Giro d’Italia.

Best of luck to Songezo in the Giro from everyone at PEZ. 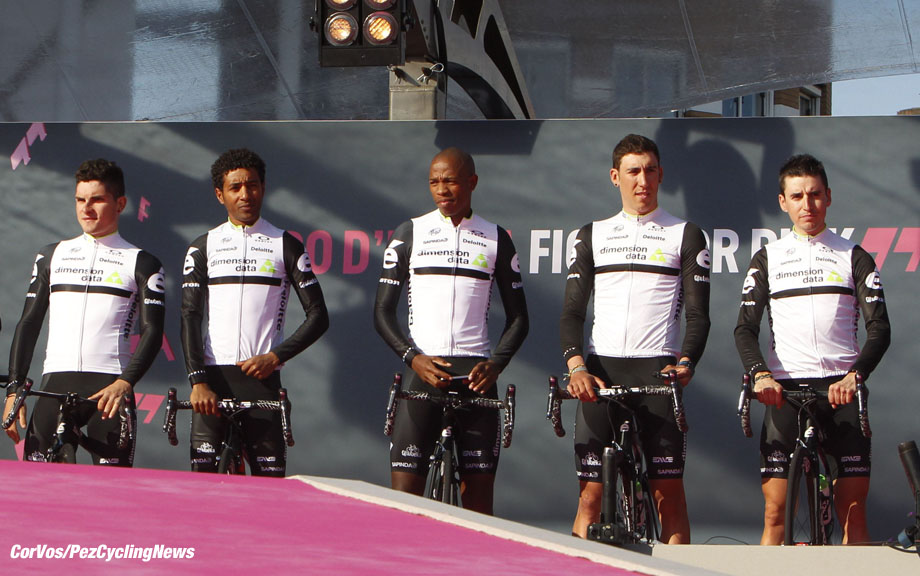 In Apeldoorn for the Giro d’Italia

I Am Specialized: Axel Merckx