The Giro: the colour, the glamour, the podium girls, the pink jerseys, the champagne – but there’s another side to the beast. It’s Saturday, the 20th and penultimate stage of the Giro, tomorrow’s time trial is practically a rest day. But there are two problems today; one is called The Mortirolo, the other, The Stelvio. And those two conspired to ensure NetApp’s Timon Seubert wasn’t destined to ride his time trial bike around the streets of Milano on Sunday.

After a programme which started in San Luis back in January and his longest race to date, the Tour of Turkey – which finished just days before the Giro – the 25 year-old German’s body called; ‘enough!

It was ten years ago when Seubert first gained attention as a rider, with second in the 2002 German novice’s pursuit championship.

In 2003 he won the European novice’s individual pursuit championship. 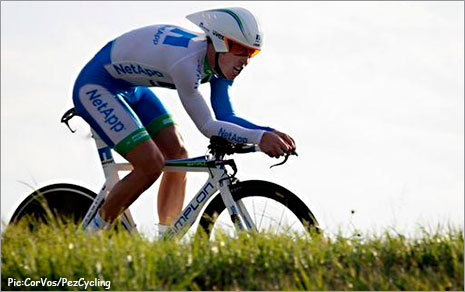 His first big road result had to wait until 2009, when he was second in the Tour of Berlin time trial.

He joined NetApp in 2010, taking second on GC in the Tour of Slovakia and sixth in the Giro del Trentino time trial stage.

Last season saw him make the break of the day in Paris-Roubaix and take fourth in the Omloop van het Houtland.

The high light of this season – before the ‘Pink Race’ – was a top 20 placing in the Three Days of De Panne.

The Hamburg Pro Continental rider took time to talk to PEZ as he relaxed at home after his first Grand Tour.

PEZ: Is the German media being any kinder to Cycling, Timon?
Timon Seubert: It’s getting a little better, but it takes time.

The press approach is mixed; some are good and behind our team, some are neutral and there are some which say bad shit.

I think that people accept that new German riders are ‘clean’ though.

PEZ: Your 2012 started way back at San Luis, Argentina in January?
TS: Originally, the Giro wasn’t in my plans – my goal was to prepare for Paris-Roubaix, where I was in the break all day, last year.

But some guys got sick and two or three weeks before the Giro I was told I was riding it.

It wasn’t easy because I’d just come off eight days racing in the Tour of Turkey. 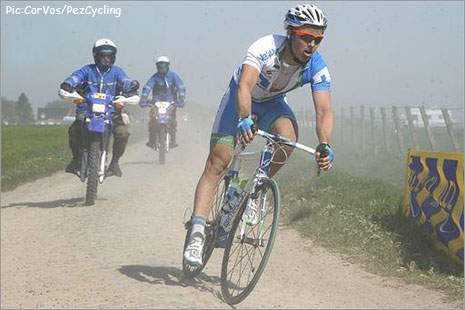 PEZ: You had a good ride in De Panne.
TS: De Panne was a good race for me, yes.

I was a little disappointed; I had hoped to go top ten.

It was quite stressful having such a short time between Turkey and the Giro but it was a great experience to travel to Denmark and be on the line for the prologue.

PEZ: How did it feel?
TS: Very special, when you go to the big races in Belgium, it’s special – but the Giro was different from that.

It was a great atmosphere in Denmark; but different again when we went to Italy – the spirit and the colour on the race are amazing. 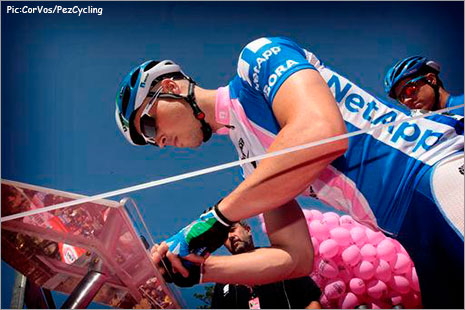 PEZ: You just missed a top 10 on the Herning stage.
TS: The start in Denmark was good from me because I carried my form from Turkey.

But by the end I was so tired – I’ve done 50 race days already, this season.

PEZ: Tell us about that long transfer from Denmark to Verona.
TS: The first rest day came round pretty quick; I wasn’t really tired after just a couple of stages.

By the time the next one came round, I really needed it – we’d raced for 12 days.

Before the Giro, the longest race I’d ridden was the Tour of Turkey – that’s eight stages.

PEZ: What was your role in the Giro?
TS: In the early stages – to help keep our sprinter, Daniel Schorn get in position for the finales.

In the mountains my role was to take bottles up and help our best guys with position coming in to the hills – then see the finish!

PEZ: Have you ever ridden mountains like the Giro’s before?
TS: Never!

I did some long climbs in the 2010 Giro del Trentino but not like that.

The other thing is that at the Pro Tour level, you’re climbing five kilometres per hour faster.

PEZ: Do the crazy fans, running alongside, put you off?
TS: It does make it really hard to concentrate on your muscles – but the crazy fans make that difficult when you’re tired and hurting.

PEZ: What was your toughest moment?
TS: On stage 19 to Alpe Di Pampeago, I was a little sick at the end – it was very had to survive and get to the finish. 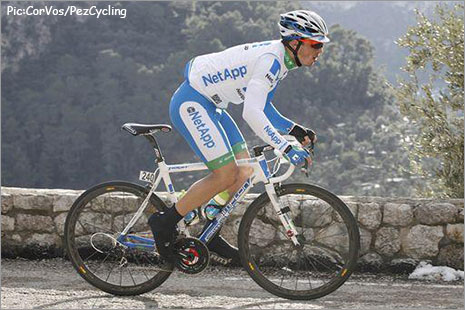 It wasn’t painful, I just couldn’t go fast enough and had to abandon.

I wasn’t too disappointed, I couldn’t do any more – it would have been different if it had happened on stage 14.

PEZ: How are recovering from the Giro?
TS: On my couch!

My family had a barbecue for me, I had a few beers, the sickness has turned and I feel much better.

And my head is good, too.

PEZ: What now?
TS: I’m going to do a maximum one hour per day for one week – my first race is in Berlin on June 10, then the German National Champs at the end of the month.

PEZ: And overall, the Giro was a great experience…
TS: Yes – I was only 100 K from having ridden the whole percorso; but there was nothing I could do.