Giro Talk: A Slam-Dunc In Pavia

Garzelli’s Secret Weapon Against Simoni – Scarponi’s Scrapes – Does Bennati Love PEZ – and Just why is Simoni in such a hurry to finish each stage? The Giro d’Italia takes a rest and SLAM! Dunc makes his move – ! PezCycling News “man in Milan” was in Pavia yesterday talking to the riders… 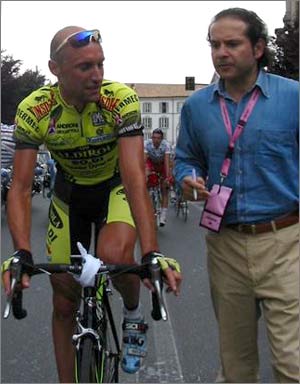 Pez: Garzelli just a quick word on how to beat Simoni?

Garzelli: Well he has beaten me in the mountains and in the TT, I’ll just have to try to beat him on the downhill! I haven’t given up,the 2 mountain stages are more for my style of riding, not so steep plus I hope with the last TT to do better than the last, Simoni is in great shape but I’ll keep having a go,I’ve nothing to lose. 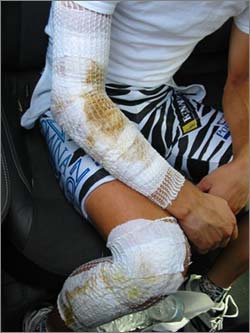 Michele Scarponi Domina Vacanze
The pic shows Scarponi’s arms and legs, he has had a tough couple of days after his crash, so I asked how he was feeling?

Pez: Michele, how are you feeling?

MS: Shit, today I suffered… I hurt all over and now my back hurts… but never mind it’s all fun of the fair!!

Pez: Will we see you on the last two mountain stages in the thick of it?

MS: oooh I’ll say yes, I hope with this rest day I can get rid of some of this pain then I’m up for anything!

Pez: So far what do you think of your Giro?

MS; Dunc,what are these questions… we talked women last time we talked… come on let’s talk about women… I need a rest from the bike!! No….now I feel a bit rough but before the crash I was pleased now I will just have to grit my teeth and get stuck,I’m not the only tired one, we are all tired, I’m just a bit battered as well!

Pez: Thanks , and I promise the next interview will be on women! 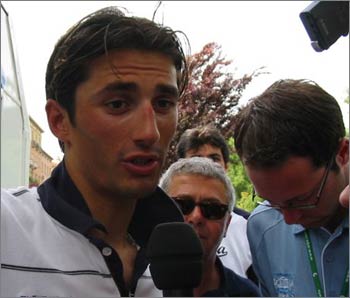 Danielle Bennati Domina Vacanze
Bennati finsihed 4th in Stage 16 . Now Domina haven’t Cipo any more they have given this very pleasant talented lad a go at the sprints. He is always there but just missing that little something. What is it? After stage 16 I met Bennati for a quick chat and this is what was said:

DB: Not getting any easier Dunc!

Pez. What’s missing in your sprint to grab a Giro victory?

DB: Well, a few things, the first is Petacchi, who after his terrible crash yesterday,(Petacchi, hit a hole in the road in Sunday’s TT breaking his bike frame and spent the night in hospital) showed something special today which nobody was really expecting. Plus we as a team took the last bend too slowly as we thought is sharper than it actually was,so I struggled in the last 200metres.

DB: I always feel if I can give more, but in reality I’m flat out. It’s a queation of age as well. This is my first ever 3 week stage race and I’m learning. This is the 3rd week, being young I’m feeling pretty tired, the last 200 metres today, my legs burned but hopefully after a days rest tomorrow, I’ll recover a bit.

Pez: Will you say ?I LOVE PEZ on the podium if you win a stage in this year’s Giro?

DB: haaaaaaaa, I thought the question you had just asked me weren’t really you style, and too serious!! Dunc, all i can say is that if I win I’ll be a very happy person and if it does happen and I’m on the podium and I remember,…Yes! 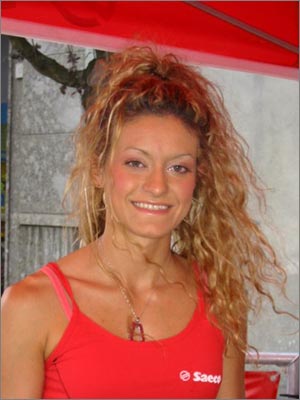 Now if anybody wants to know the real secret why SIMONI is going so fast and in a rush to get to the finish line… just look who is waiting for him at the finish line! Deborah here, also makes coffee for him in the mornings. And they say being a cyclist is tough!!