Cervelo’s Dan Lloyd’s job in this Giro is to deliver race favourite Carlos Sastre to the mountains in one piece; not an easy job given that Dutch road furniture and – strada bianche. We caught up with him just before the start of stage 8 at Chianciano Terme, the morning after the strada bianche.

PEZ: The big questions first, Dan – what did you do with yesterday’s socks?
Straight in the bin!

PEZ: Thoughts on the finalй, yesterday?
It’s hard for me to comment, I was dropped before it on the GPM so I didn’t actually see the race develop on the dirt. It was a very hard day, at 88 kilometres, our average speed was 52 kph and that’s with the rain and riding through a lot of tricky towns. On the GPM Astana really rode hard to make a selection.

PEZ: Do dirt roads have a place in modern bike racing?
I’m not sure, it wasn’t too bad because of the fact that there weren’t too many sections and in the end it was a fair stage because all of the strong guys were there at the end. It was unfortunate for us that Carlos had bad luck and lost time in that crash where Nibali and Basso came down. 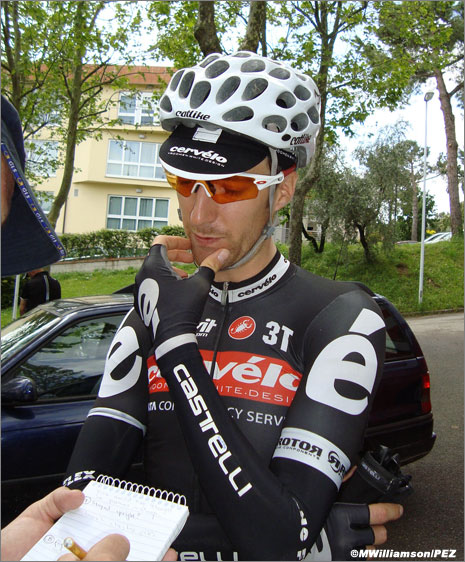 PEZ: You’ve ridden the Eroika, does it include the big climb from yesterday’s finalй?
No, in fact I struggled to recognise that first section which apparently is part of the Eroica.

PEZ: Wet or dry, what’s easiest to ride the dirt in?
It may be a little gripier in the wet but personally I think it’s faster and easier in the dry.

PEZ: What was your brief for the stage?
The same as usual, stay with Carlos as long as possible do the ordinary stuff, fetch bottles, take his rain cape back to the car. It wasn’t an easy stage to be doing a job in, because of the speed.

PEZ: How’s Carlos state of mind, given he’s seven minutes down?
His head is still good, he’s less concerned about the time than the little injury he picked up yesterday. The stages that suit him are still to come. Vino is very powerful but there are some steep climbs to come which won’t suit his build. 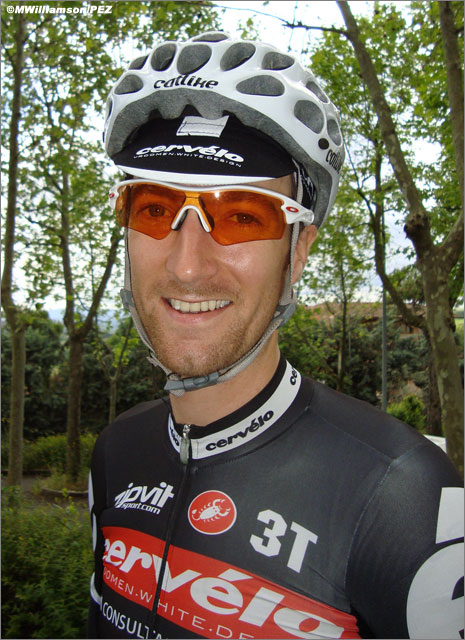 PEZ: And did you manage to stay upright on the dirt?
Yeah, I haven’t crashed since that one in Holland.

PEZ: Are there battles into the dirt sectors, like you’d get in a cobbled classic?
Not really, it’s so hard before the dirt roads that the selection is already made. That last tarmac climb, Astana made it very hard – too hard for Pippo, for example.

PEZ: Tech stuff – tyres? gears? and any tips for riding the gravel?
We were on Vittoria Roubaix tubs, I’m not sure what pressure but that’s a less important factor on gravel that it is on cobbles. I think I had a 25 bottom sprocket. As for technique, my back ground is off road so I don’t worry too much if I slide on gravel because I know you’ll get grip again, but the road guys panic because once you slide on tarmac, that tends to be it.

PEZ: And were the Classics teams trying to eliminate Carlos, today?
I’m kind of out of the loop with what’s being said but yes, you have to take advantage of your rival’s weak points – but it wouldn’t have been a bad day if Carlos hadn’t come down with Nibali and Basso. 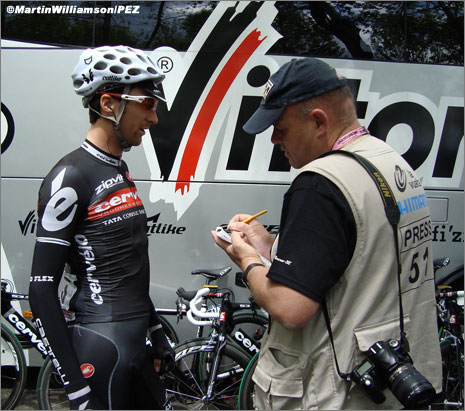 PEZ: And will Carlos be doing the Tour?
I’m not sure but I think he might well be.

PEZ: Holland – are those roads suitable for a Grand Tour?
It’s always dangerous in Holland but it’s not just the roads, you have strong, fresh riders and the sprinters’ teams all want to be up there.

PEZ: How was the TTT?
I’ve felt good in this Giro but that was the day I wasn’t feeling the best – but we did a good job of limiting our losses.

PEZ: Last question, you need to get to the start – the Giro will be good for Dan Lloyd, if . . ?
If Carlos wins a stage or two and does well on GC. 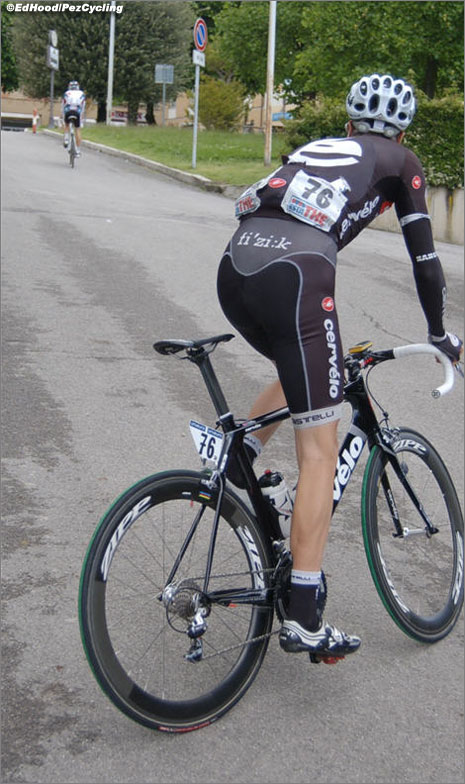 ***
And off he rode for another day at the office – 189 kilometres with a 16 K climb at it’s end. With thanks to Dan, we hope to be talking to him again before the end of this Giro.