“Three days of truth as we await the attacks on Contador.” So says the Gazzetta. And the wait was worth it as the Giro GC battle exploded with the kind of attacks the tofosi & historians love – ! We got ourselves down to the start to see what the guys on the ground had to say.

I don’t know if the last three days will upset Contador, but they’re certainly going to f***ing upset me! It’s been a tough Giro for us, we had to work hard in the first week to look after Soler, after he broke his wrist.
I rode the Tour last year, but to honest there wasn’t a lot expected of me, I just had to follow wheels. This time though, I’ve had a job to do and I’ve enjoyed the responsibility, it’s felt good actually contributing to the race.
The last three days will be tough, but I hope to get through them.” 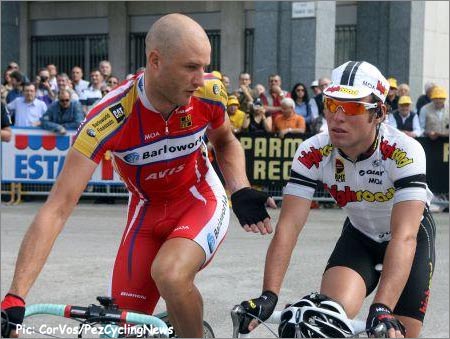 Steve Cummings and Cavendish compare notes before today’s start.
Mark Cavendish, High Road:
“Maybe it’ll be days of truth for the leaders, but to be honest, it’ll just be survival for me. I sat up before the end yesterday to save energy, there’s no point in killing yourself if you don’t have to. I felt really strong yesterday, but thought I’d save myself, what’s ten minutes at this stage? We’re a young team, but we’re still intact, we’ve got good morale and we’ve had a good presence in the race so we can’t complain.”

Charly Wegelius: Liquigas:
“There’s no doubt that the next two days will be decisive. We believe that Franco (Pellizotti) can win, we have a plan, but I can’t say too much, let’s just say that there are plenty of other teams who will be going on the attack and we’ll be watching them very closely to capitalize on their moves.

I’m tired, but I feel the same as I usually do at this stage of the Giro. The team has great morale, Daniele Bennati has been exceptional, we’ve won four stages, spent time in the main jerseys and if we had to go home tomorrow, we’d be happy with our Giro.”

“We’re happy with how our race has gone, we’ve won three stages with Mark Cavendish and Andrй Greipel, and our lead out train is one of the best now. A thing that we’ve all been impressed with is how well Mark is climbing, he really wants to finish this race.

As far as the days of truth; we’ve heard that Contador is a little scared of the Mortirolo, but I think he’s safe, his team is strong and he’s going to be one of the best in the final time trial.

I think Simoni will go crazy on Saturday, but I think Contador will hold on.”

Claudio Corti, DS at Barloworld:
I cannot be happy with our Giro, we lost Soler on stage two, the Giro without him is a different race for us; look at what he did in the Tour last year! Now we have to get through this race and prepare to have a better Tour. We have Cardenas in 11th and he might move up, but 11th or 8th, what’s the difference? – it changes nothing.

I think Contador will win; Simoni will attack today and tomorrow is a very difficult day – but I still think that Contador will not have a problem.”

“For sure, the next three days will be critical. Contador is strong, but if you have a bad day you could easily lose a lot more than the 41 seconds he has on Ricco or the 1-21 he has on Simoni. Having said that, looking at him, I’d be surprised if he lost it.

I’ve heard that Ricco is sick, so it’ll be hard for him to do anything and Contador has such a good team – they were excellent yesterday, setting a very strong tempo. I’m still not at my best, I’ve taken anti-biotics for my chest, but I’ve still been coughing a bit.

If it’s warm, that makes my chest better; if it’s good weather then I should get through to the end – I might even try and get in a move, if I have good legs!”

“Yes, today and tomorrow I think that we will attack with Simoni. We hope on the one hand to take back the 1-21 that Contador has on Gilberto and we hope too that maybe Contador will have a bad day.

An Alberto Contador in very good condition is hard to beat, but we think that his condition is ‘good’, but perhaps not ‘very good’. In bike racing, one day is not necessarily similar to the next, and remember that it is not only Simoni who will go on the attack over the next two days; there are several other riders in the top ten who also believe they can win!” 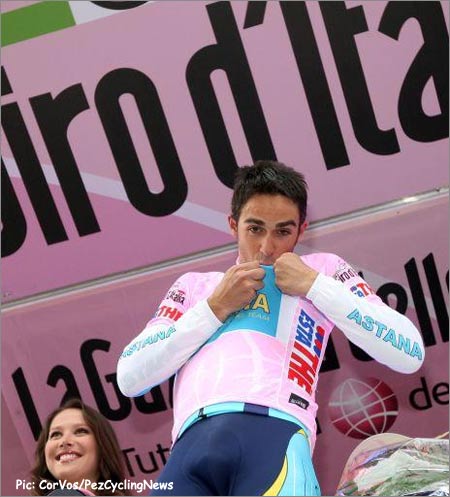 By the finish – Contador still had his maglia rosa – but only by a kiss – . Stay tuned for full reports on PEZ.