It’s not every day you get to talk one of your heroes, but today was the day I got to ask one of the top riders of the 70’s and 80’s some of those unanswered questions. Freddy Maertens had a checkered career that had some low points, but his highs brought him World Championships, Tour Green Jerseys, a Vuelta win, and a string of other victories: in one year he won 54 times.

I managed to catch up with Freddy on a typically wet Belgian morning at the Centrum Ronde van Vlaanderen museum in Oudenaarde.

PEZ: Freddy, you were World Road Champion twice, 1976 in Ostuni and 1981 in Prague, which gave you the most pleasure?
Freddy Maertens: The second one in Prague, because after ’78 and ’79 when the Flandria team split up, there were money problems and I had to visit many lawyers, and so I didn’t have much time to train and didn’t have a lot of victories. When I rode for the Italian team in ‘80, San Giacomo, that prepared me very well, training and living like a sportsman has to do, and then (the next season) I got the results; five stages in the Tour de France, the green jersey and the world championships. 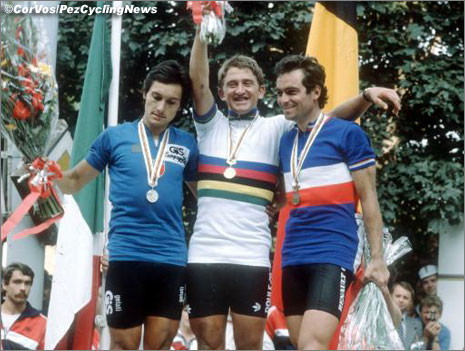 Freddy Maertens got things back on track in 1981. He took a great Worlds finale over Hinault and Saronni.

PEZ: At the 1973 World Championships on the Montjuich circuit in Barcelona it all went wrong between you and Eddy Merckx, and Felice Gimondi won. Do you still feel bitter about what happened and how are things between you and Merckx now?
Freddy: No, no, no, about seven years ago we met at the reunion of the racers in the Beaujolais region. I met Eddy, we were staying in the same hotel, we talked about Montjuich, until 5 o’clock in the morning and so we had a good result, everything is over now. But before, all the journalist’s talked about us being not friends, but since the time we became friends no journalists ask me how it is! 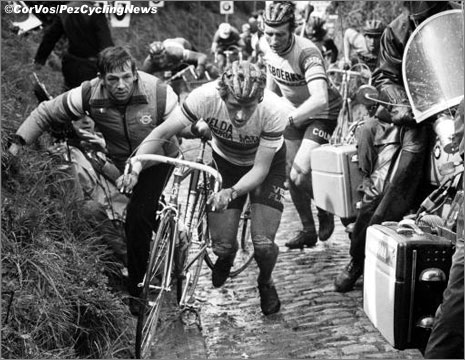 Maertens catches up on some running as World Champion.

PEZ: You now work at the Museum of the Ronde van Vlaanderen (Tour of Flanders) in Oudenaarde, you never won what was probably the race most suited to your style, but came very close. In 1977 you were the strongest man there, but you were disqualified for a bike change, can you tell us about that?
Freddy: I never won Flanders, two times second, once behind Eric Leman. In ’77 a man of the federation and UCI had something against me, so he disqualified me in the race, after the Koppenberg on the Patterstraat, he said you are out of the race, but that would normally mean you had to stop, but he didn’t say stop! I asked Lomme Driessens (Flandria DS) and he said go on as it will be good publicity. Then the same man who disqualified me came to me in the last kilometer and said “because you have ridden a good race today now you can sprint for the victory.” But it wasn’t possible any more as I rode 80 kilometers at the head. 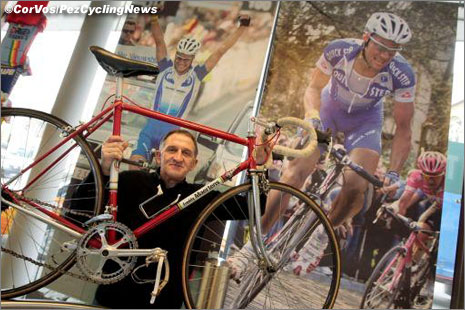 PEZ: You towed Roger De Vlaeminck to the finish, do you feel bad about never winning Flanders?
Freddy: Yea! I feel bad, he won a lot of races, but De Vlaeminck was never (world) road champion too. It’s something bad, but you have to forget it, now I’m working in the museum of the Flanders race and I see when the visitors come they always remember the race of ’77. If you ask them who won on another year they have to think about it, but ’77 everyone says “it was with you and De Vlaeminck!” 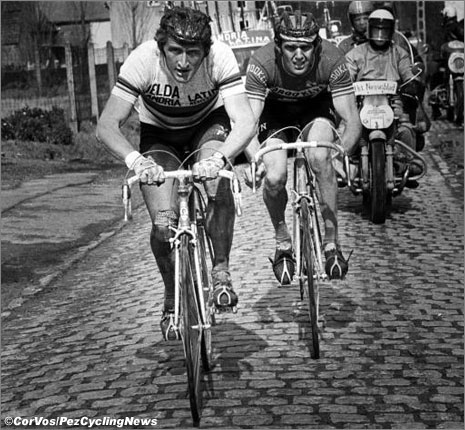 PEZ: Which was your favorite race?
Freddy: All! In my time we had to ride every race, it was the same for Merckx and De Vlaeminck and everyone, it was in our contracts. And now it’s different, the riders of today decide their season before they sign a contract. Times have changed and they can speak to their director, before no. 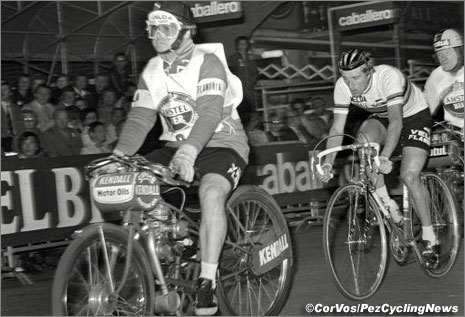 All is right. The big and small riders alike raced constantly – criteriums, Grand Tours, Classics, Derny races, you name it – they were there.

PEZ: In 1977 you won the Tour of Spain overall and a record 13 stages, what are your memories of that race?
Freddy: My memory of the race! Ah! That the Tour of Spain is not easy, but it was good for me and in the sprints I had the stage time bonuses and in the mountains I could defend myself. There were a lot of good riders in that race, but I had a great team with Pollentier and Demeyer. 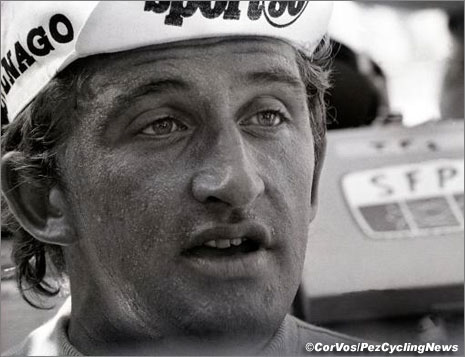 PEZ: In the same year ’77, if you had not crashed in the Giro d’Italia, you would have won that overall there too?
Freddy: Yes, the crash with Van Linden in Mugello, I had a great opportunity to win that Giro, because it was made for Francesco Moser, it didn’t have the high mountains that year, there were a lot of time trials, so I think I could have ridden a good race. 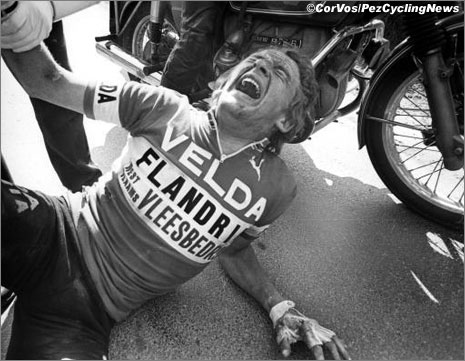 PEZ: That crash caused you many problems in your career.
Freddy: No! It was more the journalists! They said I used too much cortisone and my arm didn’t heal properly, which was not true. But at the end of that year I could see there were going to be problems with the team of Flandria. 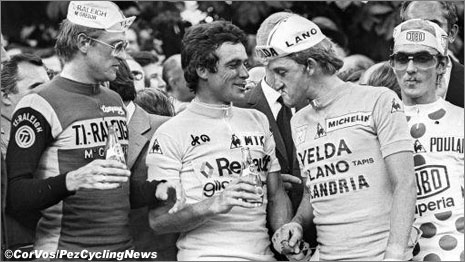 PEZ: Near the end of a race you used to have a bottle handed up to you with Champagne, do you think this made a difference to your performance?
Freddy: No, no, not the whole bottle! Just a little with sugar in it and I was good with it. Lomme Driessens would give me it and the rest of the bottle he would have. For me it was good, for Pollentier it wasn’t good. 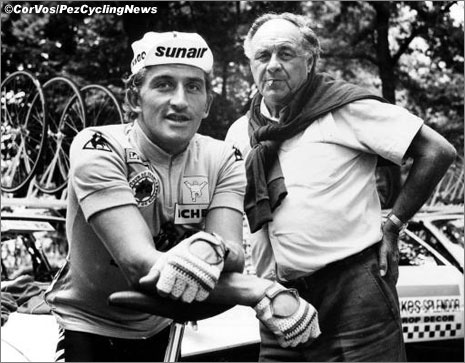 PEZ: Which riders did you look up to when you were young?
Freddy: I used to look to Van Looy, Vansteenbergen and also Briek Schotte. Of course Jean-Pierre Monserй, he was my brother-in-law. His death was a big pity, but his wife is OK now, she remarried and has a 24 year old son. 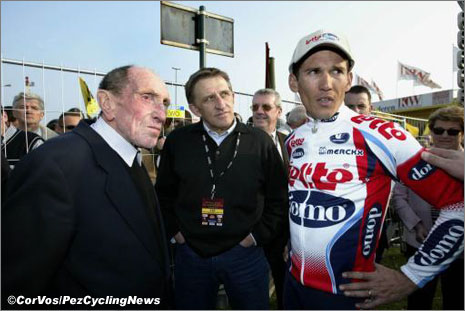 PEZ: Can you compare riders from your era to the modern day riders?
Freddy: You can’t compare, there are a lot of people who ask “who is the best rider of all time?” Is it Eddy Merckx or Fausto Coppi? You don’t know, they would have to ride alongside each other, it’s impossible and now the riders are different again. 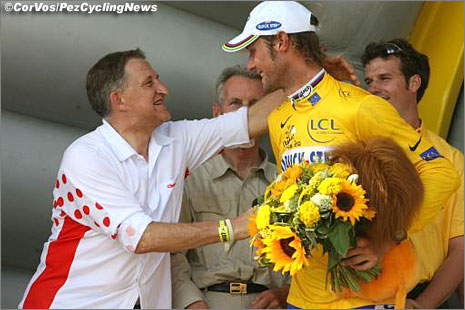 Maertens has not disappeared into anonymity in his retirement. He is still very often seen around the big races.

PEZ: Belgium is a small country, how has it managed to produce so many star riders?
Freddy: I can’t understand this either, when you go to a race there are a lot of people, it’s about that I think. 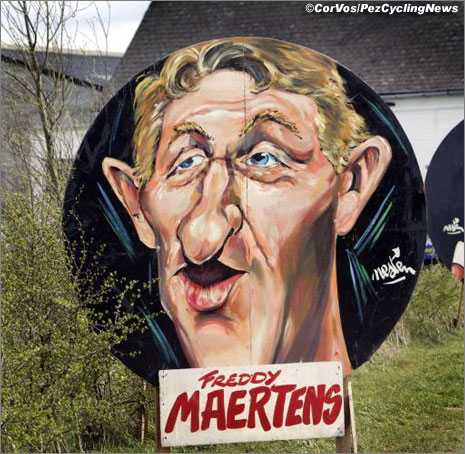 PEZ: What do you think of Frank Vandenbroucke, is he a wasted talent or can you understand what went wrong for him?
Freddy: He had so much talent, but I don’t think he lives like a sportsman now, his new team didn’t get a Belgian sponsor and now it looks like it won’t ride this year, the license is too late. Money is the problem everywhere! 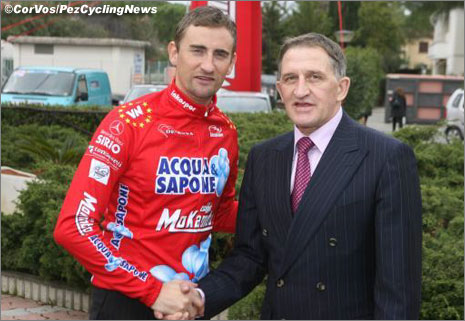 Maybe this year? Maybe, just maybe things will turn around for VDB?

PEZ: In your book, “Fall from Grace”, you talk about your tax problems are they all sorted now?
Freddy: On the 10th of June last year, after 30 years it is finished, after 30 years!

PEZ: The high and the low points of your life, and any regrets?
Freddy: My family, I have a very good wife, Carine, and my daughter Romy, she and her friend now have a baby, so now I am a grandfather and I’m very happy for this. I have a lot of regrets, but what can I change? 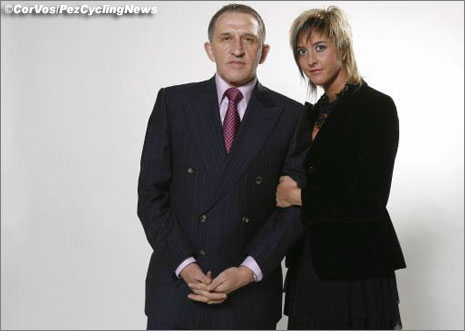 Freddy with his daughter, Romy.

PEZ: What are your thoughts on the death of Frederiek Nolf?
Freddy: Yea four years ago it was Michael Vermotte and now with Frederiek and in ’81 we lost Marc Demeyer with the same problem, it’s very sad.

PEZ: What do you think of the return of Lance Armstrong?
Freddy: I think Lance is doing it all for Livestrong, when he was ill and had his problem, he needed a lot of people and now he wants to help the other people in the world with problems. 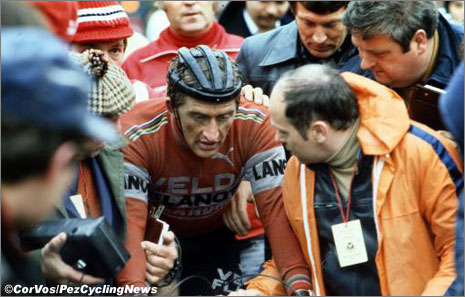 PEZ: Do you ride the bike much these days?
Freddy: When it’s not raining, and yes it’s raining in Belgium today. Now, when I ride the bike it’s for pleasure and my health is good. 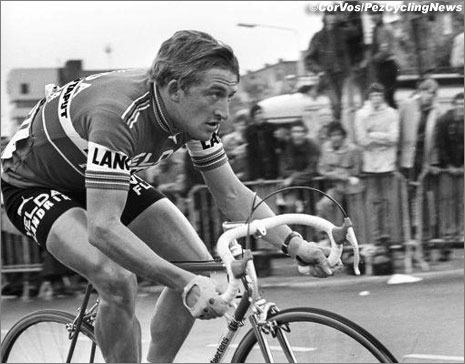 You can still find Freddy out on the roads of Flanders.

PEZ: And the last question; do you remember riding in my home country of Scotland in the 1980’s?
Freddy: The Kellogg’s races! 1 hour and 1 lap at 50 kilometers an hour! They were very professional with Mike Bennett the organizer, they were very good.

A big thank you to Freddy for making my day and to the Centrum Ronde van Vlaaderen in Oudenaarde for setting everything up, if you are ever near enough to visit the museum it’s a must for all cycling fans, and the food is great too! The Freddy Maertens book “Fall from Grace” is still available.