They’re like Japanese soldiers on some isolated Pacific island, fighting on ten years after the war has finished – because no one has told them to stop. No trendy National jerseys (and socks), shiny Federation bikes, Olympic Games trips or photos in ‘Cycling Weekly’ for them. There’s just another signing on in one of those ‘colourful’ Flemish cafes; the smell of embrocation mixing with the smell of the beer and the ever present aroma of the toilets…

Why do they do it? Is it just because no one has told them to stop? We caught up with ex British elite road champion, Hamish Haynes to ask him that very question.

PEZ: Why, Hamish?
Hamish: I suppose I chose something I wanted to do, to see what I’m capable of, to take it all the way, until I’m certain that I can or can’t.

If you take the British National Champs, I always wanted to win that, and in 2006 I did. But if you’d asked people three or four years before, they’d have given me no chance of winning it. I have a goal that I can win ‘minor’ UCI races; Dwars door Vlaanderen for example. [past winners include Robbie McEwen, Tom Boonen and Johan Museeuw.] 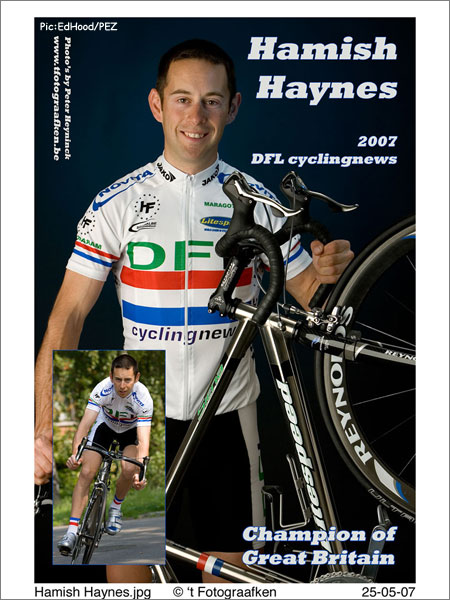 Haynes enjoyed the 2007 season with the hard-earned British National Champion jersey on his back.

Most people’s assessment would be that it would be difficult for me to win a race like that – and I’ll have to get back into a UCI team to do it; but that’s the goal I’ve set myself. So, this will be my lifestyle for the foreseeable future.

PEZ: The Internatie Reningelst – a great win for you, joining Keisse, Hunt and Piziks on the roll of honour.
Hamish: Yes, a lot of Belgian races now have the format of a 15 kilometre rolling circuit – a glorified Kermesse circuit and Reningelst was like that.

That kind of event suits me because tactically they are easier to read – you don’t suddenly have 10 kilometres of cross wind. It was around 160 kilometres; it was a baking hot day and very windy so there was a lot of scrapping and fighting in the gutters; all the best guys were there, so it was a good win for me. 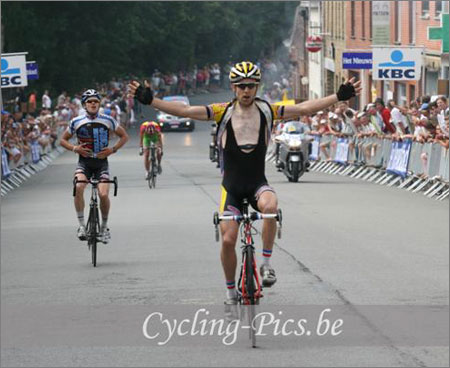 PEZ: Does a win like that have the ‘talent scouts’ making a beeline for you?
Hamish: No, you get congratulated; but they’re looking for guys at 22 years-old, not 34 like me. And remember I’ve won bigger races in my time in Belgium. Between now and the end of the year, I want to get as many big results like that as I can to get myself into a UCI Pro Continental team.

PEZ: Do you have an agent?
Hamish: I’ve approached people before, but they tend to have a ‘stable’ of 20 riders and their first loyalty has to be to them.

PEZ: What other results have you had this year?
Hamish: In decent races – that’s Inter Clubs and pro kermesses, I’ve had nine top ten finishes.

I want to finish the season on a high and to that end I’ve been doing a lot of hard training, including motor pacing – one-and-a-half hours behind the motor bike, coming off the wheel and sprinting past the bike at the max. 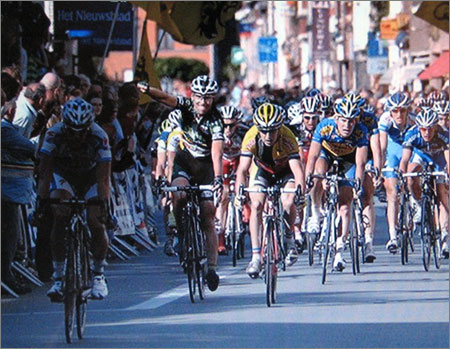 If you’re sprint training then it has to be flat out, or there’s no point.

PEZ: What’s the programme until the season’s end?
Hamish: It’s actually a very busy four week period coming up with some nice races. I have around 10 or 12 pro kermesses coming up plus a couple of Inter Clubs; my last race in Belgium will be on the 10th or 12th of October. My final race of the year is a criterium in Paris on October 19th. 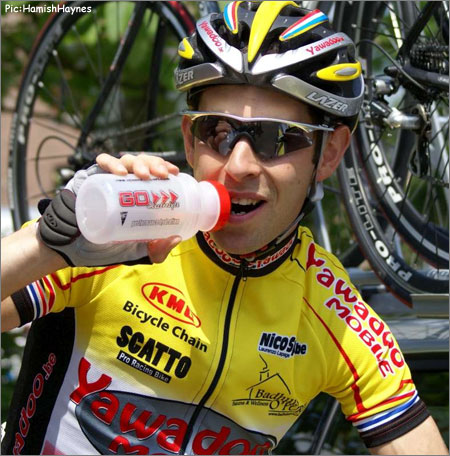 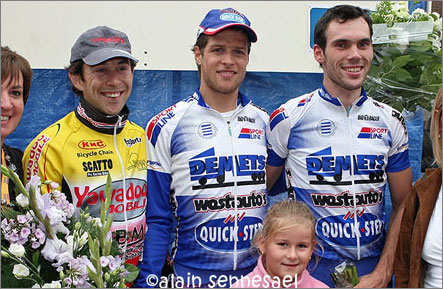 My weight has stabilised at 68 kilos, I feel very confident and I have good recovery.

With there being so many races over the next four weeks, I’ll be training less, of course.

PEZ: Do you keep British Cycling abreast of your results?
Hamish: No, but I should because I’m going well; it’s just that if I didn’t go to the Worlds when I won the British champs, then I don’t think they’d send me now. 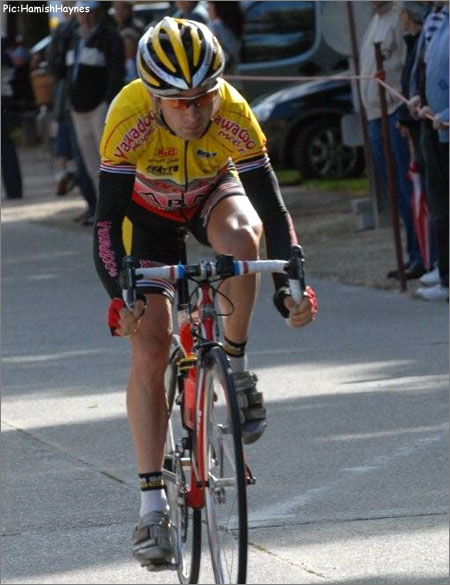 I’d love to ride the Worlds, but I know they have eight or nine young guys who they are grooming for the Olympics in the future; they’ll get preference over me.

PEZ: Are there many other ‘Anglos’ around?
Hamish: There’s Matt Brammeier, we sometimes go for a spin or a coffee – it’s been hard for Matt fighting back from that crash last winter, he lost a lot of muscle.

Steve Lampier is going OK and young Adam Blyth is on the up, then there are other guys, like Dan Davies and Alex Atkins who I see from time to time. 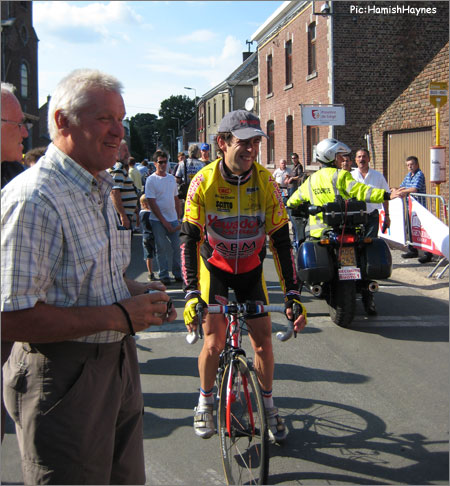 PEZ: Who’s doing all the winning in Belgium?
Hamish: The Beveren 2000 team have been dominating the Inter Clubs; they’ve won 60/70% of them. Kenny De Haes of Topsport Vlaanderen is going very well and so is Bjorn Leukemans, he was let go by Predictor-Lotto because he failed a test, but it was actually from something that the team doctor gave him.

He’s back racing and going well, I’ve been in a few breaks with him and he’s very strong. 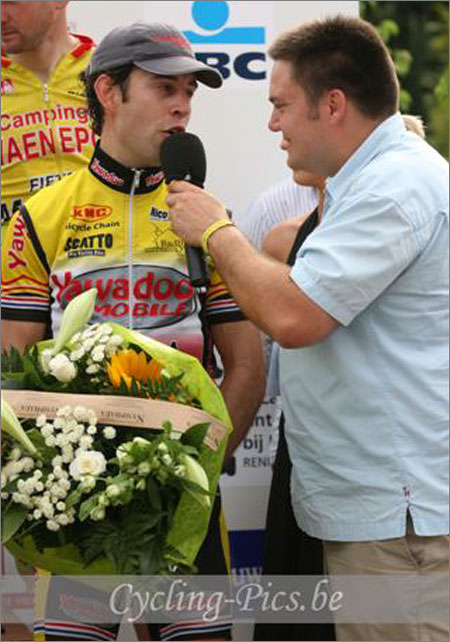 PEZ: So the fire still burns within you?
Hamish: Very strongly – I’m very motivated and going for it!

. . . . and did we tell you he lives in Eddy Merckx’s gran’s old house? Somehow that seems approriate! 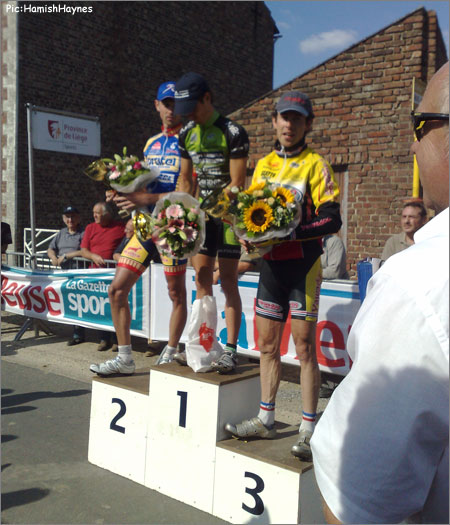