He’s been described around the PCN watercooler as a diamond in the rough, and a work in progress. Our own Heidelberg Homeboy, Jered Gruber, is certainly one tough cookie, I mean, how many times can a guy get dropped and still love bike racing? We asked Jered about his season so far…

PCN: So Jered, I read on your fantastic website that you’ve done three races so far this season, tell me about them…

JERED: Well, first off, I’d like to thank you for your time and effort in talking to me, I have to say that this interview definitely brings me a little bit higher in the world of cycling. 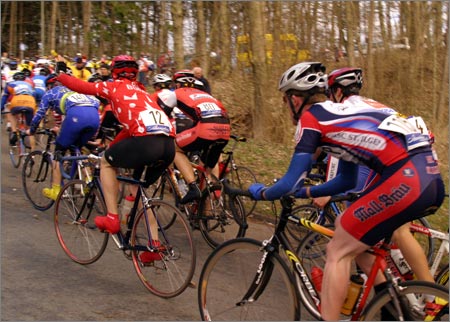 PCN: Jered, please, tell us about your races.

JERED: Ok, ok. So, yeah, three races done so far, and three amazing attacks off the back, but for some reason the organizers didn’t recognize my genius and all I got was some weird little acronym DNF. I have found the racing here to be a bit of a shock to the system: it is ever so “uncivilized”.

PCN: What do you mean by that?

JERED: Well, first off, the people here do not understand that road racing means racing on the road, not jumping curbs, attacking on sidewalks, doing your favorite Lance Armstrong cyclocross impression. They do seem to be quite fast though, but I can’t really tell, from my position dead last in the bunch, the group is usually so far in front of me at this point that all I can see are blurry little people riding away into the distance.

PCN: At the back? Jered, haven’t you heard that racing is best done from the front of the group and you have absolutely nary a chance at the back?

JERED: Well, yeah, I mean I’ve heard that lots of times, but I’m not so sure about it. Everybody gets so up about getting to the front, throwing elbows, head butting, yelling and screaming – I just don’t find it all that appropriate. I find the racing much more peaceful and calm at the back of the pack. I used to try and get to the front, but after failing miserably in numerous attempts at getting to the front, I decided that I would do the opposite and ride as far back as humanly possible whilst still receiving the happy companionship of a monster draft.

PCN: Interesting, so, three races, tell me a little bit about each one so far… First, Zusmarshausen.

JERED: Zusmarshausen (at this point, Jered started shaking and quivering, and needed his teddy bear for comfort), yeah, it was a hard day. The wind howled like a caged she-devil, and struck like Muhammad Ali. I found out later that it wasn’t just me at least, it was the whole entirety of Europe which was infected with 100 kmh winds. So it was windy, there were about 175 people, which was by far the biggest race I’ve ever done.

There was a steep 1 km climb toward the end which wasn’t really that hard, but after the climb, it was very hard. The field stretched out so far, I couldn’t see the front on a long straight road. We descended a road that was like 15% DOWN, and I thought I was going to get dropped on the downhill, the next 10 km or so were raced at some kind of fierce tempo which I heard later often saw computers reading 60 kmh.

The course was a 27 km loop run 5 times, and I made it through four of them. After the fourth time up the wall I decided it would be better if I attacked off the back and tried my luck going solo, so I said my good-byes and flew off in the opposite direction. I quickly gained (er lost) a couple of minutes, and my attack was so successful that I never saw the field again and came in all alone. 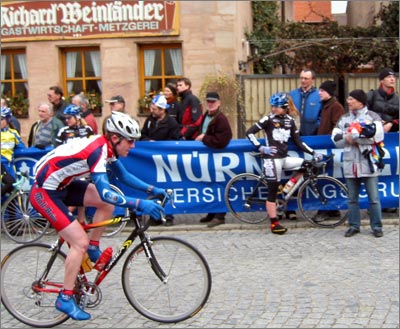 No, I wasn’t quite dropped here, I was catching back onto the back after coming to a standstill on a 20 percent climb

PCN: So you were dropped! Moving on, tell me about Fuerth and Goellheim.

JERED: Well, Fuerth was really hard, but at least it wasn’t windy, but it did snow, so you can decide for yourself what’s better. Personally, I’ll take snow any day, because snow doesn’t blow you sideways and not give you any draft. Anyways, I was lucky enough to get to the start line ten minutes early and find myself already at the very back. I thought that was very convenient, because at least I wouldn’t have to work on moving back in the group. I was somewhat dismayed though to see that the first riders were already running full speed out of town while I still had one foot on the ground. I was very unhappy.

This course was quite tough with numerous rolling hills, but culminating in the end of each lap with a steep climb, first paved, and then the second part, pave. There were a lot of dumb people though, especially at the back. They would come down the hill to the ridiculously narrow right hand corner in their big rings, come to a complete stop waiting to start the climb (had to wait for your number to be called), and then promptly fell over when they realized that very steep climbs are not meant for the 53×14.

I was of course dead last here, and thus had to make sure to punch their tickets while getting back to the group, and when I got back to the group and the cobbles ended, that’s when the fun really began and I couldn’t feel my face or arms or think for that matter. It went on like that for a few more kilometers and then thankfully the pace would let up and I’d work on regaining consciousness.

I did this about six times I think it was, but then on yet another ascent five people got dropped in front of me, inconveniencing my forward progress greatly. Then I had to ride back to the group, but it was more like writhe back to the group. Then in the crucial part where I normally did my best impression of sucking wheel, the wheel in front of me decided to attack off the back, but this time I was a little bit too, er, wasted to jump another gap, and thus I submitted my papers and it was game over and yet another solo break off the back. I was most perturbed.

Sunday was my first German crit, and it was really fast. I didn’t know it at the time, but it was evidently stacked with big time crit monsters and pro’s and scary things like that. I once again took up my position at the back and started the 52 lap countdown. Thankfully, the crit was only like 65 km long. Good lord. There was some pain going on there. Every lap there was an almost 180 degree turn followed by a large hill, and it was here that I worked on my: “I’m going to win the final stage on the Champs-Elysees Sprint” about 40 times before I couldn’t quite muster the strength to do it one more time, or 10 more, whatever. I’ve never gone uphill so frickin fast. I remember looking down and seeing my 13 in full spin action. Very interesting. 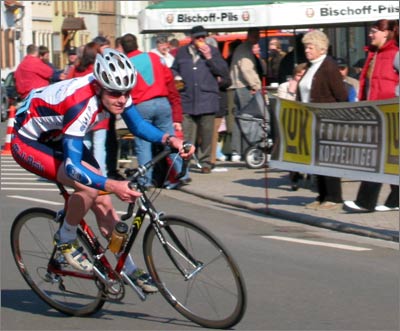 As you can see, even in times of intense pain and suffering, I try and keep a smile on my face

PCN: So Jered, any other comments, maybe changing your goals a bit? It sounds like your indoctrination into European racing hasn’t been so smooth.

JERED: Well, I’m trying to keep up the spirits. I’m not too worried. I recognize that there is a lot of room for improvement, but I’m psyched about that, because what fun would it be if I just started winning races in March? Definitely not a good sign. I’m working on resting, resting a lot. I’m still way overtrained, as my recent fitness test showed (or, more precisely, what it didn’t show), and I’m still way inexperienced. My legs feel good, and I’m going to start dropping the hammer on someone at some point. I don’t know when and I don’t know where, but someone will feel my fury sometime in the next, er, 12 months. I promise that. 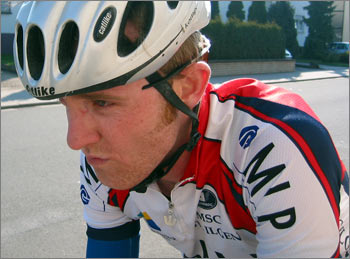 Um, I think that look definitely sums it all up.

JERED: On the contrary! I had a Division Six pro team contact me last week, but I told the DS and marketing manager that I needed to stay in school a little bit longer – need to make sure I get my education. I don’t want to end up like those NBA players, or other drop-outs. I realize that when I’m 49 and retire from professional cycling, I’ll need something to fall back on, so I’m presently working diligently through two massive research papers, and I think I am now a full-blown expert on religion in America and why it makes America so exceptional. Would you like to hear about that? I’ve got 8000 words ready to present right now if you want.

PCN: No, no, thank you for the offer, but this should suffice for now. Thank you for your time Jered, and we here at PezCycling News, wish you all the best.

But seriously, I hope it doesn’t sound like I’m giving up or throwing in the towel, because I’m not. I’m just trying to keep the spirit and the fun and try not to take the situation all too seriously. This is cycling, I ride for fun, I ride for the pain, I ride to improve, that’s what it’s all about. I’m going to get better, the legs are there, this is just something I need to deal with between me and my experience, the results will come, that they will. I can’t WAIT to get some more racing in, this is so much fun because it’s so different. It hurts like hell, but it’s nice in it’s own special little way, and besides, I paid THREE Euros for the crit yesterday, talk about some cheap motorpacing.

Don’t forget to check out my website with daily updates and near daily pictures.

Feel free to email me with any comments or questions, I’d love to hear from you.
[email protected]

If you are interested in seeing some more of my pictures, go here: https://www.JEREDGRUBER.com

Gratuitous Sponsor Plug
Thanks to:
Golder Associates, my newest sponsor. Golder Associates is a premier global group of consulting companies, specializing in ground engineering and environmental science, take a look at their website, at www.golder.com , for all of your engineering needs.
Matt Russ, my most excellent coach, if you’re ever looking for an excellent coach in the Atlanta area or around the world, send him an email:[email protected], or take a look at the website: www.thesportfactory.com.