Henk Vogels: Back In The USA

Henk Vogels has done a lot in his cycling career with podium finishes all over the world including, Tour de France stages, world cup races, a win in the 2000 USPRO Champs, a death defying crash at 64mph(!), and two seasons with ProTour squad Davitamon-Lotto. This might be enough for most riders, but not for the Aussie fast-man, who’s ‘geed’ to be joining Toyota-United for 2007 and a few more shots at glory.

We caught up with Henk at the Darren Smith Memorial race in Australia to chat about his form and aspirations for next year. 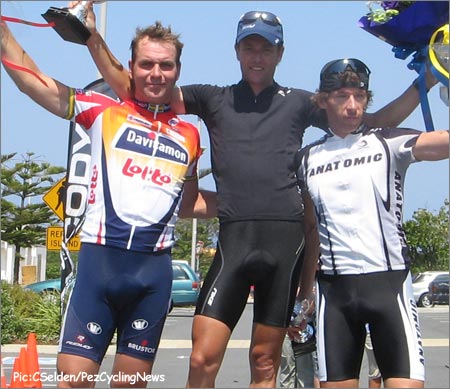 Henk standing tall on the podium at the Darren Smith Memorial race in Australia with Jason Phillips and Craig Cahill.

PEZ: You rode well today (a hard fought 2nd place) All is looking good for a strong start to next year?

VOGELS: Yeah, I’m feeling good. I’ve got a bit of punch still. I’ve been in the gym a bit. My recovery wasn’t real good today, but I’m feeling good for this time of year which I’m happy about.

PEZ: You must be excited about next year, going back to the States?

VOGELS: Yep. I’m really, really geed to be going back to the States, especially being in a leadership role again. I had a great time with Van Petegem, McEwen and Steels etc in the Davitamon-Lotto squad and it was fantastic having a couple of years there. It was one of the best teams in the world, but you know, I was a little bit disillusioned towards the end of the year and I needed a little bit more motivation and I went and talked to the guys at Toyota-United. I saw what they did at the Tour de Georgia and they run it like a ProTour team and it’s a fantastic organization, great riders, I’ve got a lot of friends there and I love the racing over there so I’m really excited to go back.

PEZ: What aspect of the US racing did you miss during your Lotto years?

VOGELS: I really love the night crits, the $10,000, twenty five thousand people events. They’re just awesome and I really missed that sort of stuff. Also, more being in a position of being a team leader, going for the win again, just having the opportunity to go for the win. You know, in the Giro in Lotto, it’s 21 days working your guts out for someone else and one day I got a go on my own, so the team leadership is something I’m really looking forward to again.

PEZ: Your massive accident, what it would be, 2.5 – 3 years ago now? You went down at over 60 miles per hour! How’s the recovery been, still many memories of that?

VOGELS: 3 years ago, yep. Yeah, every time I stand on my left foot! I’ve got very advanced arthritis in my left tailis bone and I still have 6-9cm screws in there. I just live with it, live with the pain.

VOGELS: Yeah, it’s fine. It has its bad days, but it’s an injury which is manageable, I was lucky it didn’t finish my career. I’ve been working a fair bit in the gym strengthening the area and it’s helped me a lot.

PEZ: Now onto the reason you are here today, Darren Smith. You used to race with him in the old days, how does it feel representing him and his memory here in this race today?

VOGELS: Yeah, lots of reminiscing. I saw the trophy before the start today and I saw my name as the winner of the 94 race – when I was just breaking into the ranks in cycling. I raced with Darren in 92 and the guy put Armstrong, Casartelli and Dekker away before the Olympic Games that year, he was amazing. He was touted as being Australia’s next Phil Anderson and unfortunately we lost him to an accident but everyone still thinks highly of him and the fact that the Australian cycling community still represents him by putting on such a fantastic event here.

PEZ: If I remember correctly, the 94 race was a 160km road race over Mt Tomewin (toughest mountain on the Gold Coast), a bit different than today’s crit!

VOGELS: (laughing) Yep, it was. A fantastic event and if I recall the AIS (Australian Institute of Sport team) guys went 1, 2, 3.

PEZ: Obviously the completely different format of a criterium race suits you better these days?

VOGELS: Oh yeah…I much prefer something like this, flat, fast, a few corners and in the 11. Back then I was 5kgs lighter and a bit smaller too.

PEZ: I noticed you’ve already got the bike, shoes & pedals for next year with Toyota-United – when are you heading back there?

VOGELS: I’ll be going to a training camp in California early next year and then straight into the Tour of California.

PEZ: And your base will be where?

VOGELS: Boulder, Colorado again. Lots of Aussies and pros live there and I look forward to it again.

PEZ: Cheers mate, thanks for your time and best of luck in the states next year.

Lookout for a stomping Henk in the big money crits next year as he leads the Toyota-United team in it’s 2nd year in the pro peloton. An in form, attacking VOGELS is an awesome sight – coming to a town near you!

With Toyota-United losing their star sprinter, JJ Haedo to CSC and experienced recent PEZ interviewee, Antonio Cruz to Discovery, they have signed well by taking on VOGELS as he is the kind of rider who can lead a team both on and off the bike.

• Get more info at the Henk Vogels Foundation website – a organization Henk set up to “to provide promising elite, disadvantaged and disabled Western Australian cyclists with funds to prepare for and compete in national or international cycling competitions”.