Herr Homeboy: Let’s Do Some Racin’

After our team presentation in February, I travelled with my team to Lloret de Mar in Spain for our training camp. We did a solid eight days of training – the weather was perfect everyday. We rode about 180 km daily with an average of about 32 km/h. 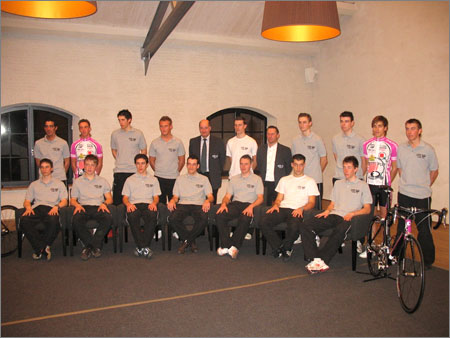 When we returned from Spain, we returned to rain. Back at home, it rained for two weeks straight. Training during this time cost me quite an efffort, however, in the second week after I returned home from Spain, I managed to ride 28 hours. 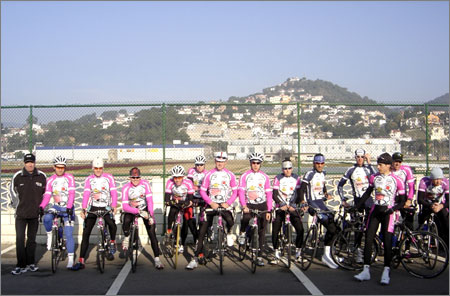 After the team presentation, it was straight to Spain and some serious training.

My first race of the year was the Beverbeek Classic in Belgium. This race is a Category 1.2. Unfortunately, the race was over pretty quickly for me. I was at the back of the field at the beginning of the race – and suddenly we hit the crosswinds and the field blew to pieces after 5 kilometers! I was in the last group. After 50km, our group was told to stop, which only meant that we had to turn around and return to the finish – unfortunately the finish was 30km away and it was 3 Degrees and pouring rain. 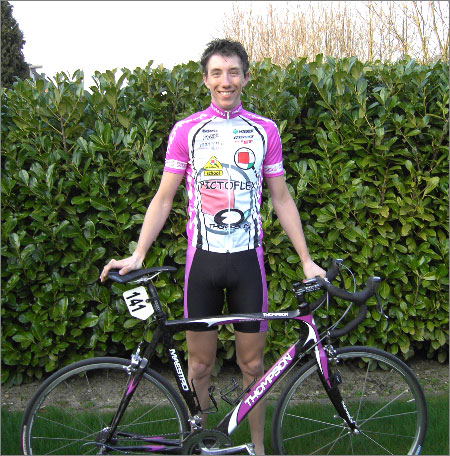 Dirk showing off his work clothes.

A week later I rode my first kermesse of the season in Neerlinter. The field was pretty big: 180 racers – and we were flying: 45km/h average. The race came down to a bunch sprint, but the weather was fantastic: sun, no wind, and 15C. The many and often crashes really frayed my nerves, but that’s pretty much normal for Belgium.

Two team vehicles for the core of the squad’s transportation needs.

On March 14th, I did my first professional kermesse. That was really cool. 240 pros were at the start and there were tons of spectators along the roads. Naturally, many of the spectators wanted photos of the riders. Even I had my picture taken a few times! The atmosphere at the race was fantastic and my motivation was in line with the atmosphere. There were some big teams at the start: Quick.Step, Predictor-Lotto, and Unibet.com. There were also a lot of Continental Teams: during the race I met Gregg Germer, who was just like me, having trouble in the massive peloton. In the smaller side roads, the riders towards the back couldn’t even see the front of the race. The cobbles and the high average speed (45) took care of the basis for the final selection. At the end of the day, a leading group of 26 sprinted for the win. Behind, I rolled in with the shut-down field to the finish.