Saturday’s Omloop Het Nieuwsblad kicked things off in terms of northern European racing for the 2010 season. And it wasn’t only the men fighting it out over the kasseien and hellingen. Just like Juan Antonio Flecha for the guys, Emma Johansson is also up and running with a big win in the women’s event.

And this is what the lady herself had to say about Saturday’s victory.

Emma: It was a great start. The whole team was fantastic on Saturday so it was a very nice victory both for me, and for Martin, my fiancйe and trainer, who’s done so much for me.

My preparations were good. It’s been a lot of hard work this winter and to get the victory makes it all worth it. Everyone was very happy on Saturday. 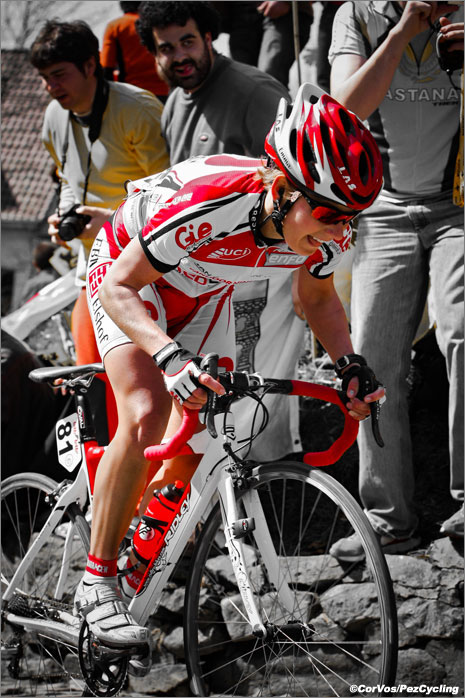 PEZ: Was it a surprise to win or did you just have a feeling from your training that it would go well?
Emma: You never know exactly where you’re going to stand in the first race, but I knew the route really well. I had some really good training on the circuit with the whole team; we’d done it twice together. We came as well prepared as we could and I was in good shape.

I started feeling that my legs were coming good. In training camp, I had quite sore legs from training so hard in the winter. So I loosened up on the training in the last few days before Saturday and then the day before the race I felt really good.

PEZ: How tough was the race, the weather?
Emma: I had been doing the rain dance the day before because I really wanted rain! That makes the race a lot harder. It rained until about half an hour before the start so the roads and the first hour were really wet. After that, it was a nice warm day. 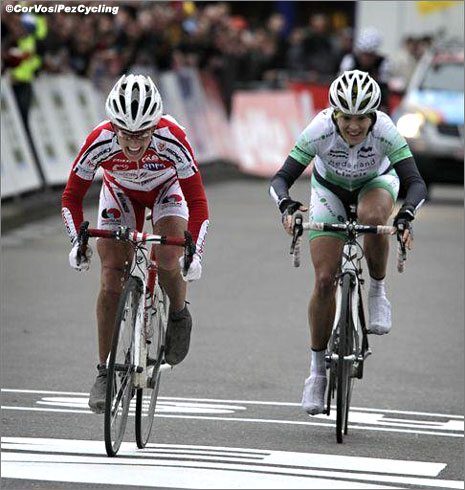 PEZ: Only half the field finished though …
Emma: It was a hard circuit. What gave me a chance to ride away were the three climbs – the Kruisberg, the Cфte de Trieu, the Paterberg – then the Paddestraat with the cobblestones.

I knew if we made the race hard enough it would break the whole peloton and hopefully I could get away with a couple of others. It was the chance to ride away from the big sprinters who maybe can’t climb quite as well.

PEZ: Were you surprised that Cervelo put four riders in the top ten, but only had Regina Bruins in the group at the finish?
Emma: I don’t know really … my plan was to ride off Kirsten Wild because she’s a very good sprinter and my chance to beat her was on the climbs. I was surprised that when we got away with five riders, Regina Bruins and Sarah Duster didn’t ride, they were just sitting in the wheels.
Liesbet, Grace and I just said ‘We have to go, it doesn’t matter if they sit in the wheels’. We chose to keep on going and then when we got to Paddestraat they fell off.

I guess their plan was to ride for Kirsten and when she crashed the plan changed. Also, we raced without communications for this race. 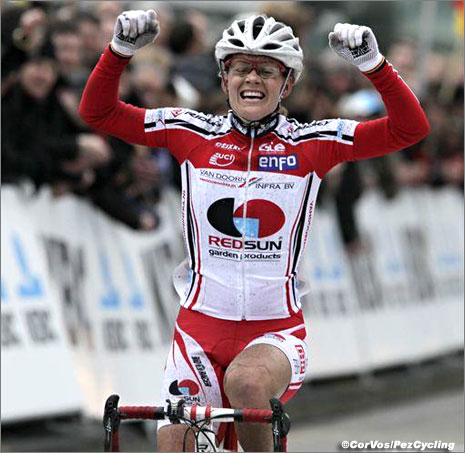 PEZ: Was that weird when everyone is so used to radios?
Emma: The new rules mean that there is no communication in category two races. I don’t mind. It just makes it more important to have a good strategy beforehand, a team that will work together and can talk together during the race.
I think for us it was a good thing because we’re a tight team, and we had good tactics.

PEZ: You tried to attack the break a couple of kilometers before the finish …
Emma: It was a strong tailwind towards the end, it was really fast and it was too easy for others to get on the wheels. Grace tried to get away, Regina tried … I think if someone had wanted to go alone, it would have been better to have tried from 10kms out or something.

PEZ: How was the sprint?
Emma: It was good but it felt really long! With 100 metres to go I was like: “They’re going to come any minute!” It’s how it has to feel really. The pain!

PEZ: Bet you’re glad you had the race on Saturday not Sunday!
Emma: It was horrific weather on Sunday! Just not normal! Usually we have a long training day on Sunday but we changed to Monday … much nicer to sit on the sofa and watch the Kuurne-Brussels-Kuurne! 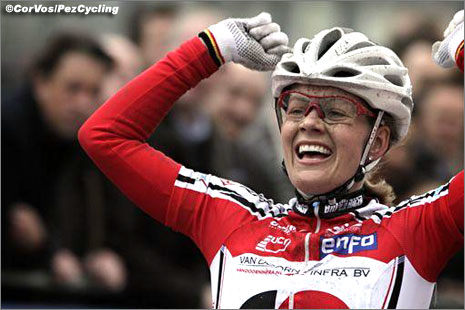 PEZ: I hear you had a champagne celebration on Saturday night?
Emma: Yeah, we got invited to a birthday party. It was a nice celebration, everyone was so happy. I had eight glasses of champagne, one for each rider on the team!

It was nice to open the season well, The pressure is off because I know I’m on schedule. I’m feeling good and happy about everything.

PEZ: And it’s now only a month until the Tour of Flanders …
Emma: Well, we have four kermesse races over the next two weekends. Then there’s a team training week in Wallonia where we’ll do some long rides and climbing to prepare for the first World Cup race of the season in Italy on March 28th – the Trofeo Binda Cittiglio. Then we have Flanders.

* * * * * * * * * * * *
Congratulations to Emma for her victory on Saturday, and best of luck to her in the upcoming races. You can keep up to date with her on her personal website and with the Red Sun Cycling Team here.