Team High Road’s Adam Hansen was involved in a dramatic crash at K-B-K, requiring recovery in hospital. PEZ caught up with the young Australian for an update, having talked earlier this year when he was fresh from a team win at the Tour Down Under and wearing the jersey of the Australian time trial champ.

It was one of those bone-chilling crashes that no one in cycling wants to see, let alone experience. Such was the particularly nasty incident that Team High Road rider Adam Hansen was caught in at this year’s Kuurne-Brussels-Kuurne.

“I saw the parked car and as the bunch was coming I put my whole body weight on the riders coming towards me, I couldn’t out power them,” Hansen wrote on his website. “I felt like a skinny bike rider playing rugby with a bunch of cattle and I was slammed into a car, over the bonnet, windscreen and last memory was the roof of it.” 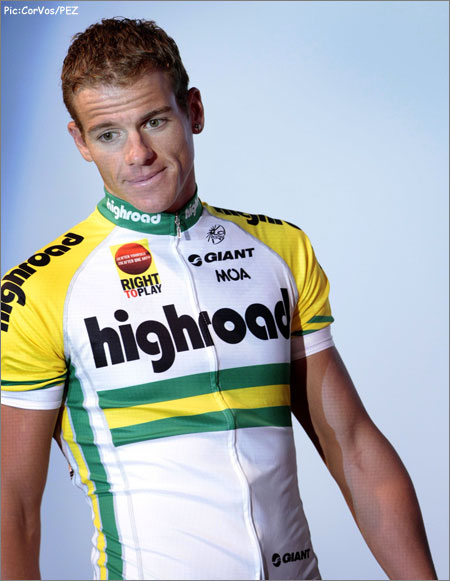 As medical staff rushed to assess the damage, Hansen looked so bad that teammate Vicente Reyes apparently thought that he might be dead.

Although he woke up in hospital not knowing where he was or what had happened, and with head and shoulder injuries, Hansen was fortunately very much alive – and feeling quite upbeat when PEZ contacted him last week for a quick update.

“Mentally I’m good,” he said. “I always think there is a good from every bad situation.”

Hansen will be taking it easy for a while, though, and was not sure when he would return to racing.

“Now I get to spend a bit of time at home – something I have not done for a while,” he explained. “I can do a bit of altitude training and because I have no races for a while I can start with base work again; the more base I have the better the season will be.”

Assuming that his recovery is speedy and complete, Hansen could well be a good choice for an up-and-coming rider to watch for this season. PEZ had talked to the talented – and outspoken – young rider earlier this year just following the Tour Down Under.

The 26-year-old Australian got his break in the professional ranks with then T-Mobile last year, but a broken hand sustained at the Giro kept him out of action for much of the middle of the season. 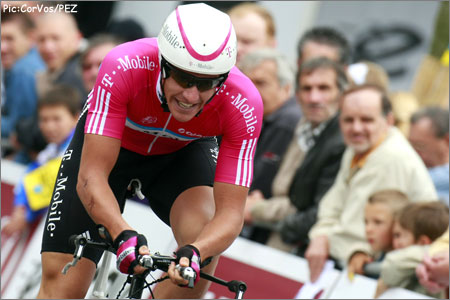 He stormed back, though, with a top-ten placing in the final time trial stage of the Vuelta. This result was perhaps a prelude to this season’s opener, when he won the Australian national TT title and then nearly grabbed both of the national jerseys by placing second in the road race.

“First and second in two races is a great result,” he told PEZ. “So I’m very pleased with it and can’t complain at all.”

The early part of the year was a difficult time for the team formerly known as T-Mobile, with manager Bob Stapleton having to step in with a larger personal commitment with the departure of the team’s title sponsor. PEZ wondered if Stapleton was happy with Hansen’s results.

“Bob was very pleased,” Hansen said. “We have to show that we still the same strong team as before, so a win is never unwanted; plus, with the national jersey, it will be a reminder of that win in very TT race for the year.” 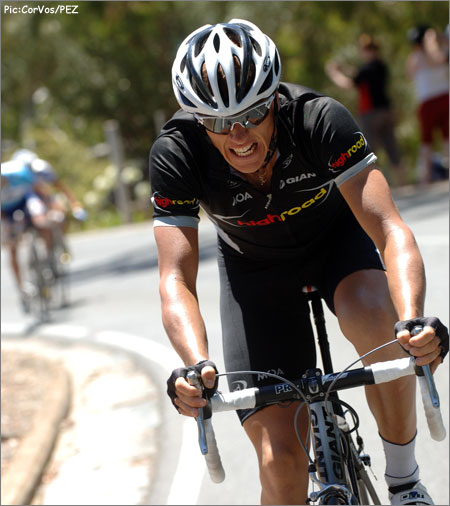 There was not much time for resting on his laurels for Hansen, though, with the Pro Tour season opener, the Tour Down Under, hard on the heels of his title-winning ride. Still, he saw the Tour as a good start to the season.

“It’s a nice race – in fact I enjoyed it more than I thought I would,” he told PEZ. “It’s very well planned; they didn’t do any short cuts.”

And for Team High Road, looking to continue its winning ways, the team had the satisfaction of its rider Andre Greipel taking the overall and a bunch of impressive stage wins. For Hansen, though, it was not quite the race he expected.

“I was planning to do well there,” he explained. “But in the end the course wasn’t hard enough for me to shine, which was a shame. Every day being a sprint is no fun for me and about 115 other riders – but it’s always enjoyable to work for a leader than wins.”

Hansen might not have ended up as a professional bike rider under different circumstances. After flirting with triathlons and some local cycling in Australia, he decided to take a year off his work in software development to head overseas to Europe. But unlike many other antipodeans having their so-called OE, or Overseas Experience, Hansen was not headed to pint pulling in a pub off Piccadilly or driving a lorry in Stoke-On-Trent.

Instead, he put his sporting talents to work and took up the opportunity to race as an amateur in Austria. This was the start of four years on small teams before being picked up by T-Mobile.

Hansen is the consummate professional and, as PEZ discovered, has a very focused and scientific approach to training. There had been some suggestions in reports that he was not entirely focused on this year’s Australian TT title race, so PEZ asked what his build-up had actually involved.

“I had a huge break, six weeks off the bike,” he revealed. “That was the biggest break I have ever taken. I had a perfect training program into these races with my eyes on both. It was very specific training and it worked very well. It’s documented and will be used again next year, too.”

With the TDU now over, and the other races fast approaching, his up-coming preparation will again be carefully managed, starting with five days after the TDU with just 1 hour of riding a day for recovery. 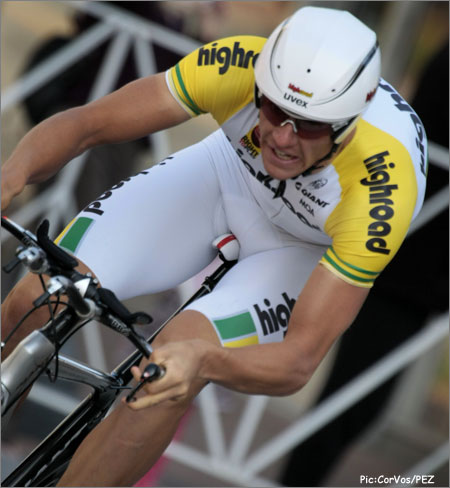 “Then I will do a hardcore 3 weeks of base work,” he explained to PEZ. “Then a few weeks of intervals before the races start in mid-March. Maybe I’ll be a little under done for the first ones, and be flying around May-ish, which would be nice.”

Hansen clearly has talent for riding against the clock and PEZ wondered if he would specialize in time trials for this year.

“I’m trying to,” he said. “I like TTs and I think I’m well suited to them given my body weight. And it’s an honest race, too: there are no excuses.”

He went on to explain to PEZ that this would involve some well-considered training changes as well.

“I want to shift a lot of training towards the TT for two reasons. Firstly, for the TTs themselves and, secondly, it’s a great form of power to have in the road races.”

Hansen obviously wants his legs to do some talking this year, but he is also quite outspoken off the bike as well about doping. On his website, he has made reference to his thoughts on dopers, in quite a colourful fashion with references to the fate of their knee-caps. 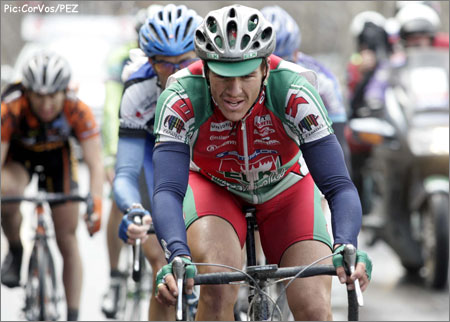 Even just a few years ago, such comments would probably have earned Hansen a not very polite talking to from an elder in the peloton. T-Mobile had its share of doping ignominy, but PEZ asked Hansen why he was personally so outspoken.

“I’m strongly against doping for two reasons,” he told PEZ. “Firstly, it’s wrong and, secondly, it does affect clean riders. So why should I not make strong comments about it? The more riders that speak out the better. I guess we want the other riders to understand that you can’t use the reason, ‘the rest are on it so it’s okay’, because this is not the case at all.”

PEZ wondered, given that other young riders have also been staunchly anti-doping, whether there was a change taking place in attitudes.

“I would like to think there is a generational change taking place – there needs to be for the future of the sport,” he said. “Also, if the new generation gets introduced to cycling in the correct way then there will be an improvement in the future.”

Hansen also finds time amidst his training and racing schedule to keep his personal website updated with news, racing stories, and graphs of his SRM data (including his TT title win and his, perhaps infamous, 25 cheeseburger ride with 7198 kilojoules expended). There is also the occasional giveaway of swag, with the last prize a pair of T-Mobile gloves.

PEZ was interested as to whether he got good feedback and support for his commendable efforts to keep fans updated and involved.

“Yes I do,” he said. “And fans are important. If it weren’t for the fans there would be no pro sports on the planet. I try to make things more exciting for them and bring them closer to what happens in our lives. A lot of fans tell be how interesting some of the things are I write about. I get enjoyment making others happy so it’s good for everybody.”

Fans will be able to look forward to plenty of updates this year about Hansen’s time trial exploits, but he has other goals in mind as well. 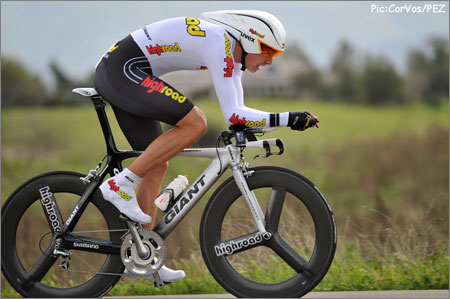 “My main goal is to make the Tour team,” he told PEZ. “That’s a big one – but I will try. But, still importantly, is to race well in different types of races. One-day races are good for me because I can have great one-day hit outs, but I believe I am more suited to stage races. While I’m in no rush in improving these, I still want to be involved to learn more about them.”

When in Europe, Hansen is not based at Team High Road’s old German home, or the popular locations in Spain or along the Mediterranean coast. And, unlike so many Australian riders in Europe before him, he is not a resident of Belgium. Given that Frydlant in the Czech Republic is where he calls home, PEZ was intrigued and asked about the location.

“It all starts with a beautiful girl,” he explained. “This is the home town for her.”

So, all is revealed?

“Also, the training rides are great,” he added.

Hansen has been off to a flying start this year and PEZ will look forward to seeing him back in action as the season unfolds. Check out AdamHansen.com for progress on his recovery, insider views on his races, and perhaps even some more giveaways as well.

See the team site at HighRoadSports.com.