Rider Interview: You may have seen the recent GCN video: ‘How Fast Do Pros Cycle Uphill? – Beginner VS Amateur VS Pro: Hill Climb Edition’ where three different riders are pitted against each other. The climbing specialist is Andrew Feather, British Hill Climb champion, Ed Hood spoke to him after his championship win.

It’s short, sharp, specialised and SORE. The English hill climb season; September, October – and into November in this crazy year – sees skinny men lining up to do battle with the watch and Sir Isaac Newton’s discovery. It was two years ago when I first interviewed Bath solicitor, Andrew Feather as CTT National Hill Climb Champion. In 2018, his Championship win was his 12th hill climb success off 15 starts, impressive. But not as impressive as this year with his Championship win the now 35 year-old’s victory was his 15th hill climb win off 15 starts – a feat we cannot think of ever having been equalled?

We caught up with Andrew a day or two after his win.

PEZ: Congratulations, Andrew – tell us about the Championship beast, Streatley Hill in West Berkshire.
Andrew Feather: The grade varied between 13% and 26% over what is a long continuous curve, it’s short at 800 metres; I prefer longer climbs so I was happy to get the win. I did a few recce rides to establish the best lines through the corners and was undecided about tyre choice, I considered riding a heavier training tyre to give me more grip with the surface being damp from rain the day before and a lot of leaves about. But in the event I rode my race rear wheel and only experienced a little wheel spin, early in the ride. However, I did lower the pressure in my rear tyre from 95 psi down to 85 psi. 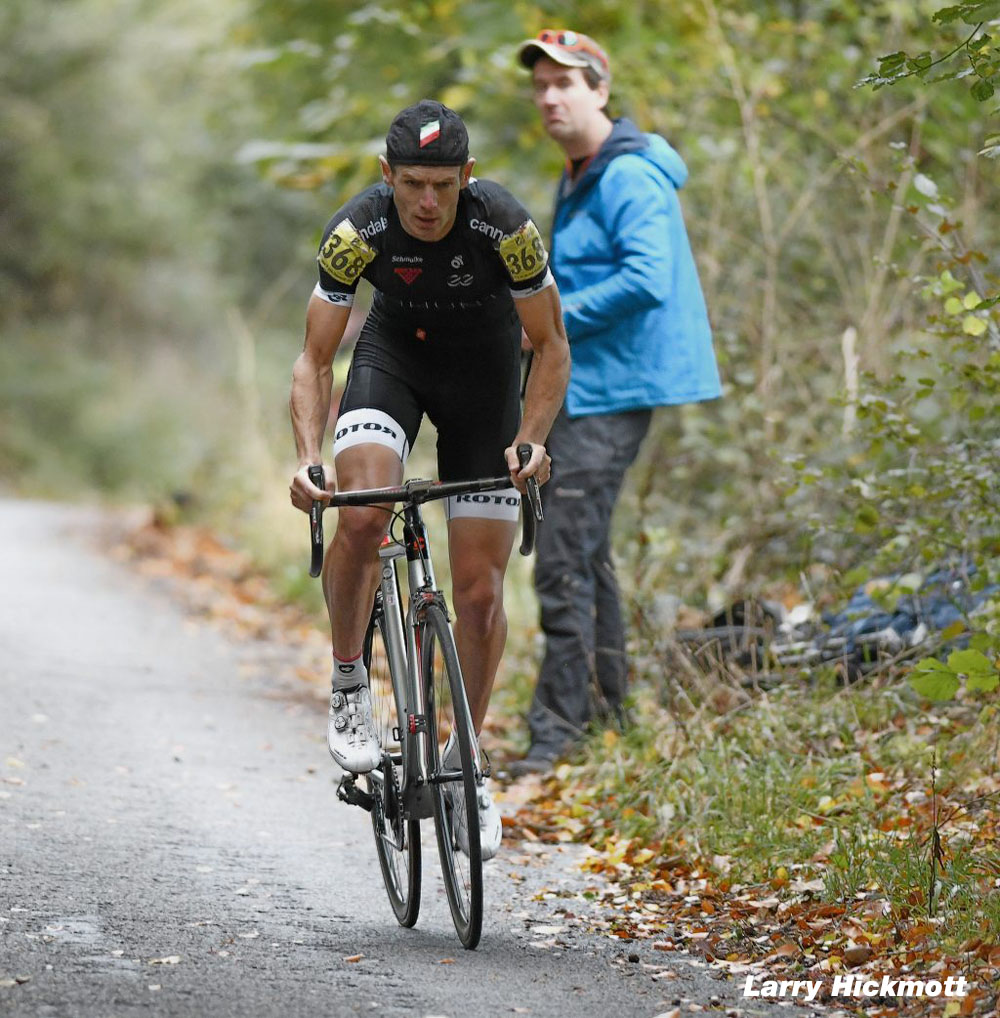 PEZ: How was the weather?
Fortunately it was dry and calm for the men, Saturday had seen wind and heavy rain; the women’s race was after the men’s event and they did experience rain though.

PEZ: What was the game plan, I read that you thought you’d perhaps gone out too quickly – showing 800 watts on your power meter early in the effort?
AF: I always try to gauge my effort, control the adrenalin early and finish strongly but on Sunday I was slowing in the last 50 metres and the finish line didn’t come a moment too soon.

PEZ: I remember you saying that you’re not a fanatic about your diet and weight?
That’s still the case, I try to be sensible and watch my portion sizes but I do treat myself and I get through a packet of biscuits most nights. 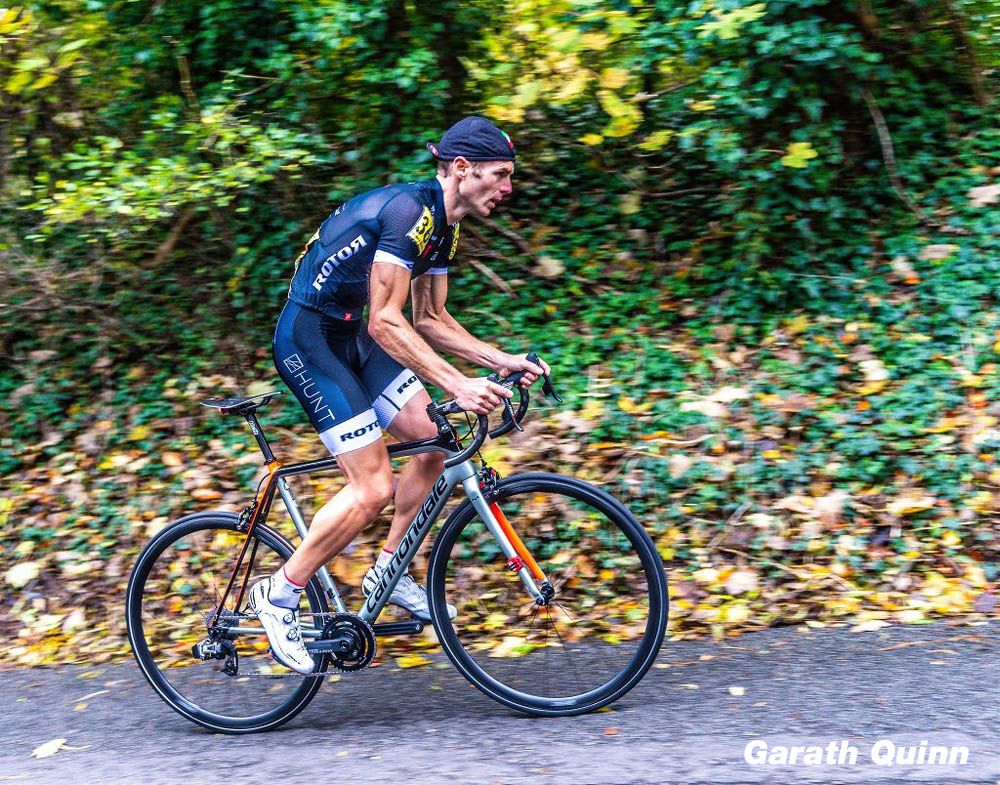 PEZ: Are you still on the Cannondale from 2018?
Yes, the Super Six evo frame but I have it down to 5.4 kilos now from 5.8 kilos in 2018 with some fancy finishing kit. I fitted Schmolke carbon bars and stem – as originally used by Jan Ulrich in his heyday – they’re a German company who specialise in super-light components. The seat post is by Mcfk another German company, it’s carbon too with titanium bolts. And I fitted Cane Creek brakes, which are very light and ideal for hill climbs. I rode the same Hunt hill climb wheels as I did in 2018. The transmission is SRAM Red electronic with a single 42 ring, I rode a 44 in 2018 but I spoke to the guys at the bike shop who do my mechanic stuff, Bomber Bikes in Bristol and they suggested the 42 which gives me better chain lines with less deflection. I also changed my handlebars, I rode 38 cm. wide in 2018 but have gone up to 42 cm. wide this year. I ride out of the saddle a lot and find I get better leverage on the wider bars – at hill climb speeds there’s not really an aerodynamic issue and I use my upper body a lot in a race.

PEZ: And you’re with the Hunt Bike Wheels team now?
Yes, they’re a very supportive sponsor with great products which I think offer some of the best value for money wheels around – and they’re really into the hill climb scene. 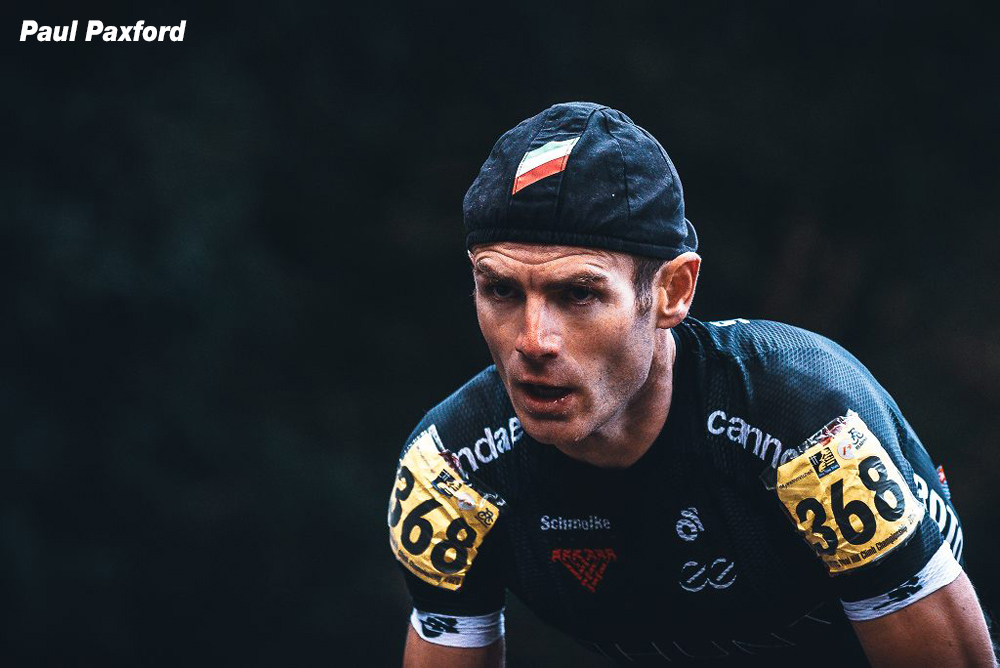 Concentration is very important for a hill climb

PEZ: Have you ever considered riding fixed, as many hill climb specialists used to?
No, in the Championship I changed gear three or four times and with the climb flattening at the top, variable gears were a must – and nowadays group sets are so light that fixed wheel isn’t something I’ve considered.

PEZ: Is your training still based around your ride from home in Bath to your office in Bristol?
With the Covid restrictions I’ve actually been working from home much of the time which has enabled me to do specific hill climb efforts in training after work in the evenings and my power figures have been my best ever.

PEZ: That stat of 15 wins out of 15 rides is mightily impressive.
I wanted to finish the job off properly and with it being a short climb I knew margins would be tight so I was happy to win by one second. 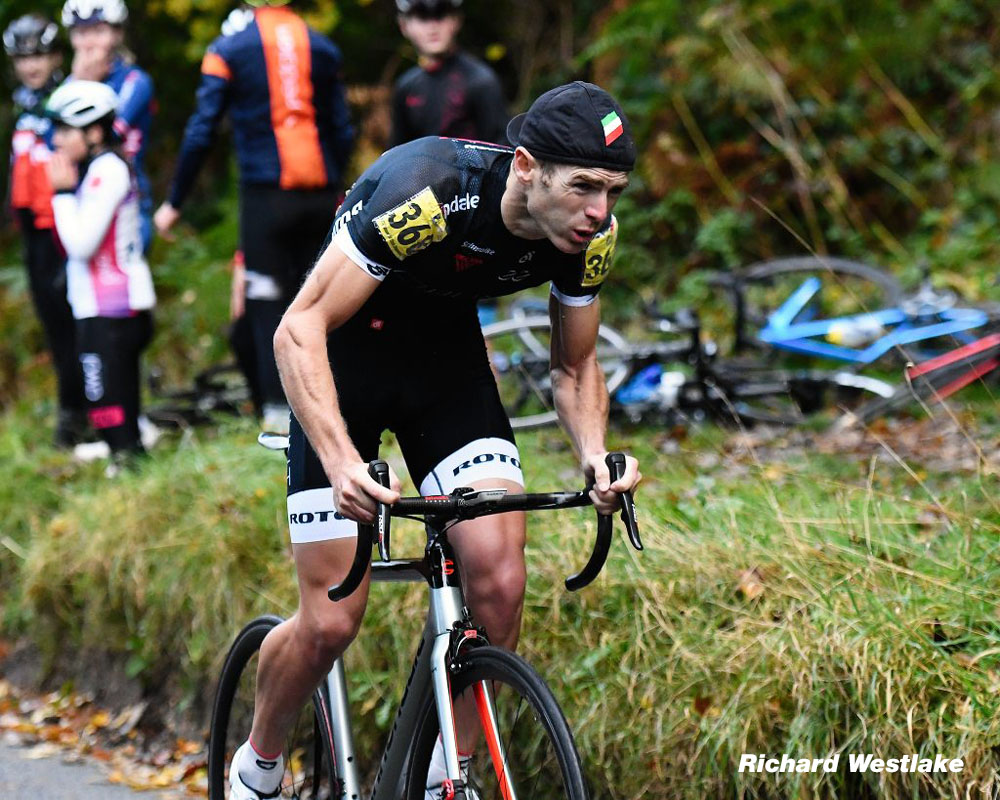 Feather has a preference for the longer hills

PEZ: First this year and in 2018 but only eighth in 2019?
Whilst I really like longer climbs, last year was more for the road man or time trial rider, the average gradient was only 6% with one third of the course flat or downhill. I beat Ed Laverack, the 2019 winner the week prior to the Championship last year but he was more aero than I am for a climb like that. But I have to say that I wasn’t on my best day, my power was down 25 watts.

PEZ: Last time we spoke you told us that you’re a man for seeking out the climbs and setting Strava king of the mountains times.
Yes, I was in the Pyrenees in 2019 and have the fifth best time on Hautacam behind Laurens Ten Dam and fastest time on Luz Ardiden. I was going to ride the Marmotte sportive this year but have postponed that until next year due to the Covid and quarantine situation. I was also up in the Lake District in North West England and set a few Strava bests; for the Hardknott Pass, Honister Pass from the Seatoller side and the Wrynose Pass.

PEZ: The Championship ‘hat trick’ next year?
I’ve heard rumours that it may be on the Winnats Pass in the Derbyshire Peak District, that’s a longer climb than this year and that suits me. 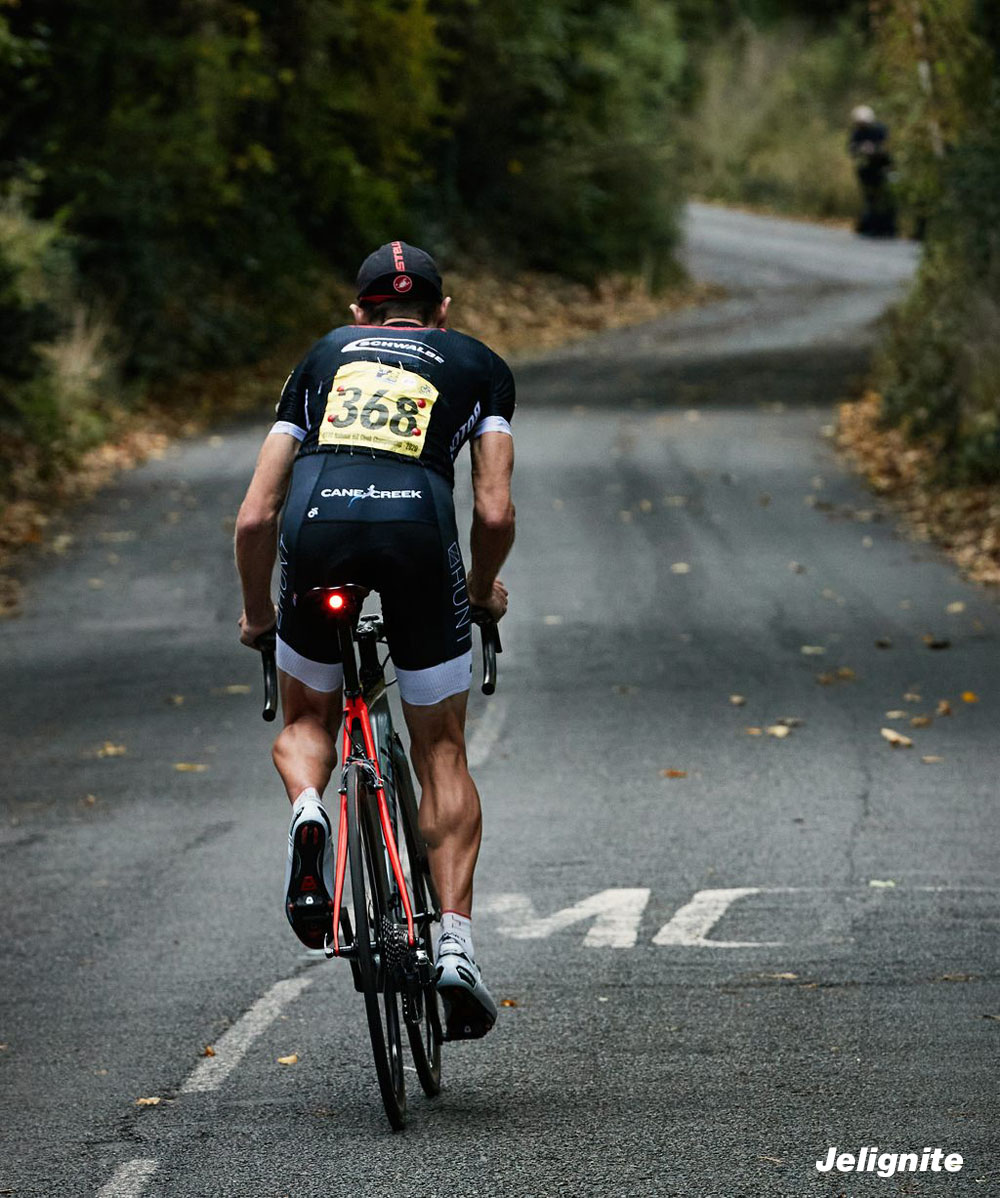 And to close we thought you might like to see Andrew’s hill climb stats for the last three seasons: 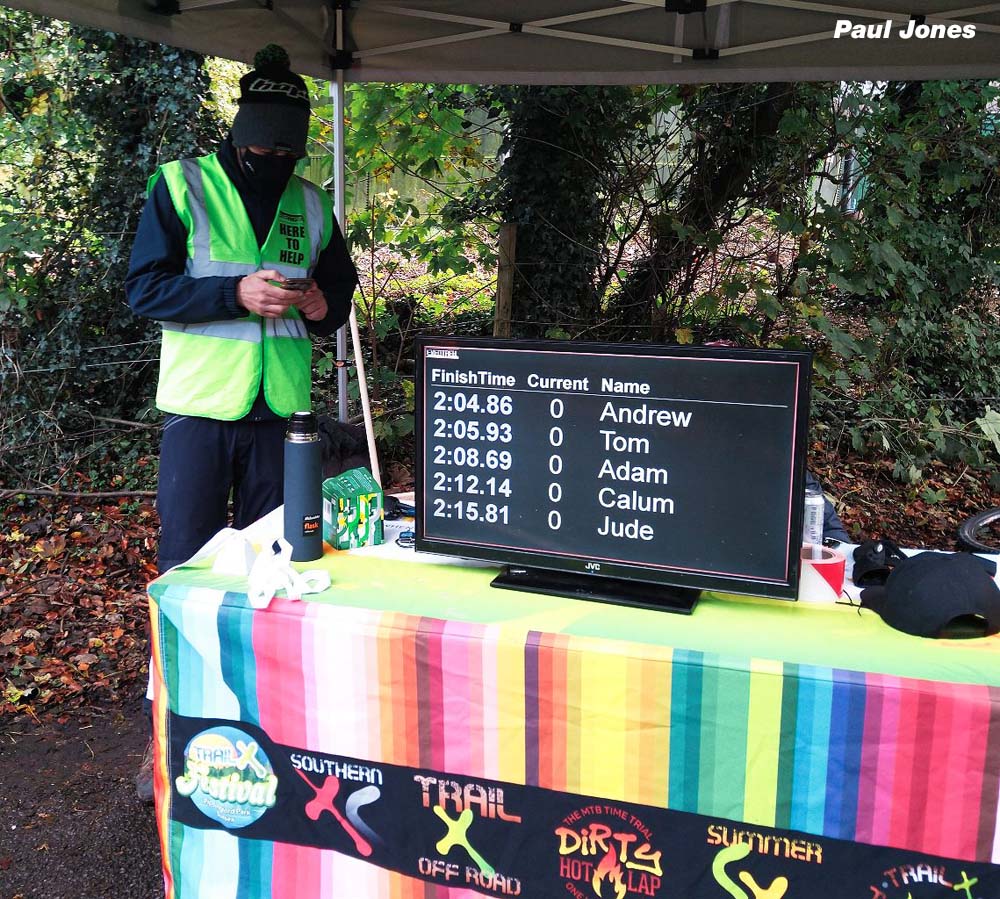 Top of the leaderboard

# Congratulations again to Andrew with thanks for his time and sourcing of images. #