He won Gent-Wevelgem, Heninger Turm, Paris-Bourges, the GP Fourmies and eight Tour de France stages; he’s England’s Barry Hoban. And he’s the guy to ask if you want answers about continental bike racing; like the Tour of Flanders, for instance…

Pez: What were your best finishes at Flanders, Barry?

Barry: I was 5th in 1967 behind Zandegu and 7th in 1969 behind Merckx. In ’67 I was in a break for 250 kilometres, 17 of us went away after just 10 K and with 15 K to go there were only three of us left. But then Merckx arrived, dragging the Italians Gimondi and Zandegu behind him; they were both from the Salvarani team and of course, as soon as they got up, they started the “one-two” – attacking in turn. Zandegu was a very clever rider, he got away and stayed away to win. (Zandegu also won Tirreno – Adriatico in 1966 and the Giro d’Italia points jersey in 1967) 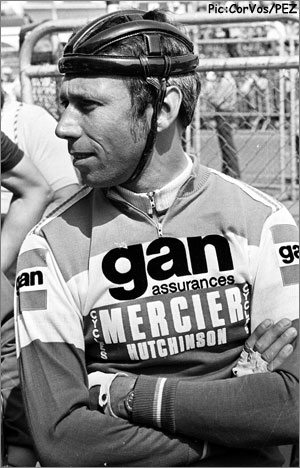 Pez: Did Merckx have agility to match his strength?

Barry: Of course – he was Belgian, they are all great bike handlers, he was acrobatic on the cobbles and very difficult to beat in a sprint after a long, tough race on the pave.

Pez: Is there a ‘best way’ to ride the cobbles?

Barry: Yes, it’s hard to explain and we’re not talking about ‘uniform’ cobbles, but the rough, irregular ones which are the toughest to ride. There’s always a line over the high points, it’s only about six inches wide, but it’s there and if you follow it then you stay on top of the cobbles and aren’t dropping-down into the ruts; it’s a better ride and there’s much less chance of a puncture. Some guys can’t see that line, but it’s there. Van Looy was very impressive over the cobbles, they used to say; “Van Looy just looks at the cobbles and he turns them into smooth tarmac!” 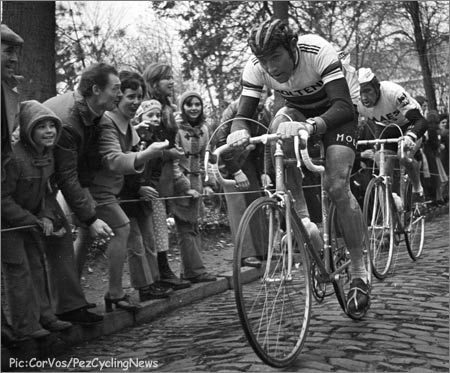 Pez: What does it take to win Flanders, Barry?

Barry: Heart! Strength and fitness. Flanders can be over before the first hill; the hills are just part of it, the wind, the rain, the cobbles and the tiny roads all make the race what it is.

Pez: Rolf Sorensen said to me last year that there’s no-way you could win Flanders at the first attempt because there is so much to learn.

Barry: Absolutely; every hill is an obstacle course and you have to pre-plan your position for it. In 60’s and 70’s the course was tougher because even the every-day roads in Belgium and the approaches to the climbs, in particular were very difficult . Approaching the Kwaremont, for example, there was a cinder path beside the cobbles and the strongest riders would fight – no holds barred – to get on to that path coming in to the climb. If you take the road from Ghent to Oudenaarde, now it’s a smooth dual carriageway, back then it was single carriageway and cobbled all the way. 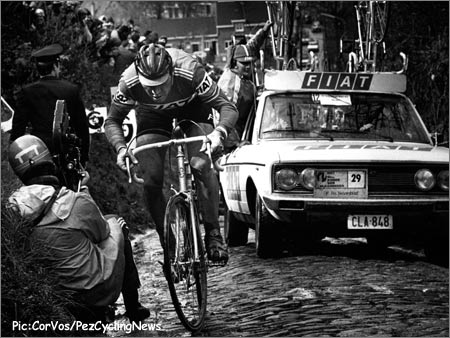 The Oude Kwaremount – even Merckx had to battle to keep his balance on the ridiculously steep berg. (C.1977).

Pez: When you look back, do you wish you had been given more team support; as a lone Englishman in a French team?

Barry: As a sprinter, I didn’t worry about having a “train” – where was Oscar Freire’s train at San Remo? But team support makes life much easier on the road, keeping you out of the wind and closing gaps for you. The Belgian teams have always worked better than the French – more disciplined. I remember seeing Freddy Maertens race as an amateur; his team rode for him just like a pro squad would have done.

Pez: Who are your tips for Flanders?

Barry: It’s much more difficult to predict who is going to win a classic now than it used to be; with riders preparing for specific races. In the 60’s and 70’s everyone rode the same races from the beginning until the end of the season; that way you could see whose form was developing. There’s obviously a lot of pressure and expectation upon Boonen’s shoulders; he has to take the race by the scruff of the neck; he shouldn’t wait for the sprint – that’s always dicey, anything can happen in a sprint, you can be boxed-in and finish nowhere. I think Bettini will give a good account of himself, even though he’s had injury problems. Zabel might be approaching the end of his career but he’s still very strong and if he can infiltrate the right break he certainly has the finish.

Pez: Flanders in one sentence, Barry?