I’ve stopped watching the TV news, it’s too upsetting to see the beautiful places I visited now with Russian armoured vehicles rolling through them causing death and destruction.

Interview: With the war still ongoing in Ukraine, Ed Hood caught up with Ian Whitehead who is based in Belgium with the Kingsnorth Wheelers where he got to know Michael Tvarbovskiy, a Ukrainian cyclist. Ian is also campaigning against the war and running aid deliveries to Ukraine. 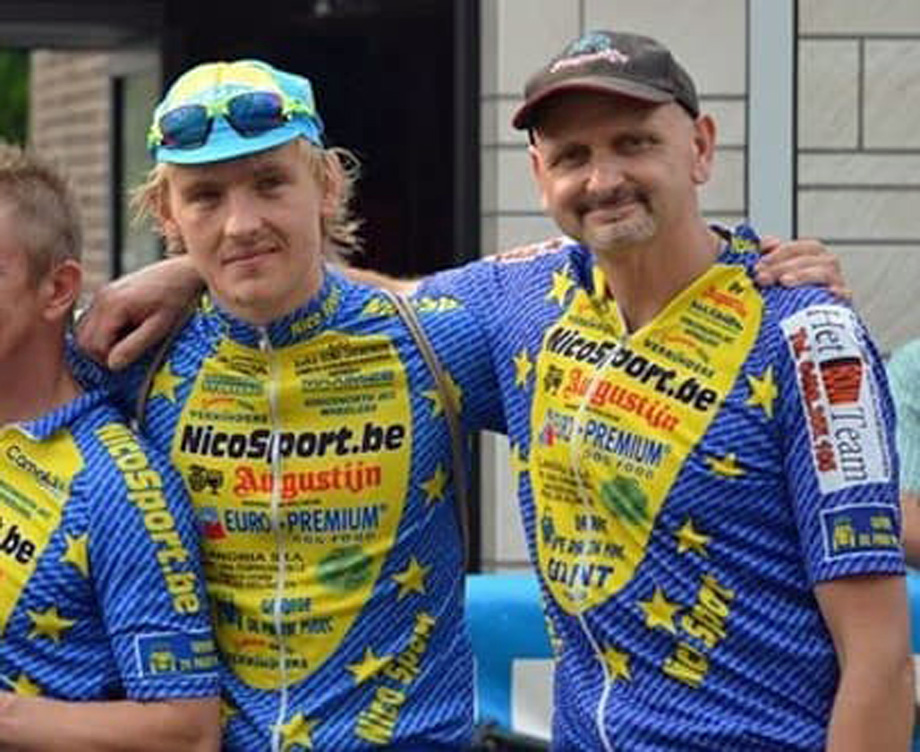 As journalists there’s little we can physically do in support of the Ukrainian Nation but what we can do is to help hi-lite their plight in the face of Putin’s vicious, unprovoked attack and give a little insight into the place and people. And whilst bike racing isn’t even on the scale of importance in such desperate times we thought it would be interesting to speak to a cycling friend of ours who has links with the Ukraine.

Englishman, ‘gone native Flandrian,’ Ian Whitehead has been involved with cycling for many years; he’s a stalwart of the Kingsnorth Wheelers, a club with an English name but based in Belgium having Kiwi WorldTour rider, Jack Bauer as perhaps it’s most famous son. Ian speaks fluent Dutch and has helped many British, Commonwealth and East European riders realise their dreams of racing in the toughest school in the planet.

We began our conversation by asking Ian how his involvement with Ukraine came about?
“Michael Tvarbovskiy, a Ukrainian cyclist had been coming to stay with us at Staf Boone’s farm near Gent – where many of the Kingsnorth riders stayed – since 2011. Staf was heavily involved with Kingsnorth and hundreds of young riders had their first taste of the kermises when staying at the farm. In 2014 Michael had to stay in Ukraine, he was active in the riots in February of that year in Kiev in protest of the then pro-Russian President, Yanukovich.

In 2015 Michael was called-up to go and fight in the Donbas region of Ukraine against the militant Russian separatists but he left to come to race in Belgium, not relishing the prospect of killing young men like himself who were just under a different flag. At that time the Ukraine military just came knocking on your door with your call up papers and you were in the army!” 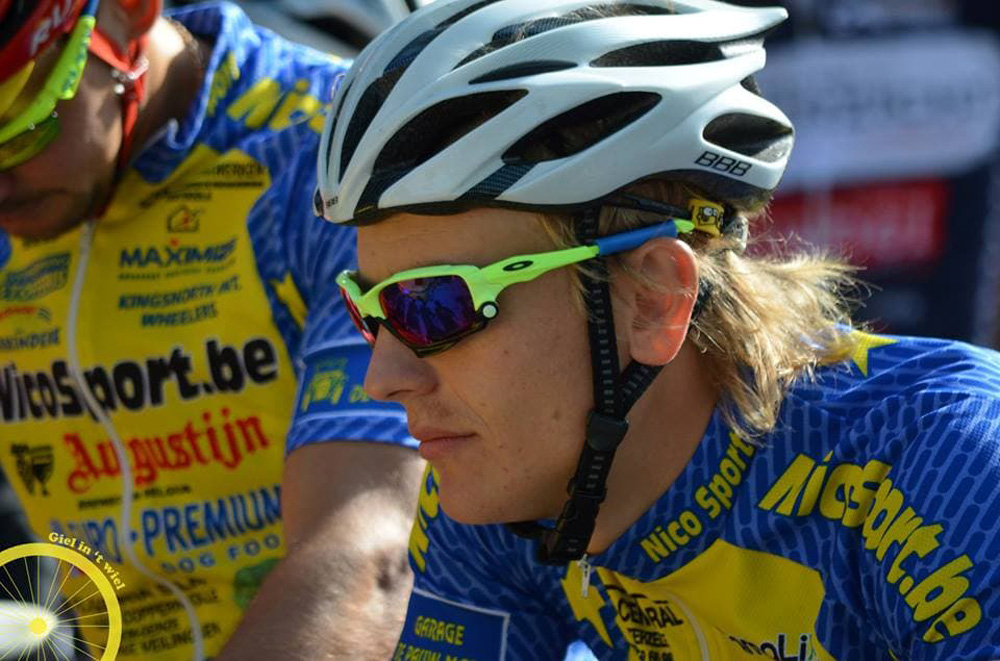 We asked Ian about Michael’s application for political asylum in Belgium?
“Yes, while he was here he wanted to apply for political asylum. I contacted an Afghan friend of mine here in Gent who put us in touch with the right channels. It took three years to-ing and fro-ing to the specialist lawyer in Brugge and the Asylum Application Centre in Brussels when finally in December 2018 we received invitation to a hearing in Brussels.

At that time there were all manner of people seeking asylum, living in tents in a park opposite the centre. The net result for Michael was he received a ‘negative’ and had to leave; what was no help was that the lawyer didn’t represent Michael in person but sent someone who was inexperienced and didn’t handle things at all well. Michael stuck out another eight months in Belgium until he was arrested in 2019 and detained in Merksplas deportation centre near Antwerp before he was flown home a month later.” 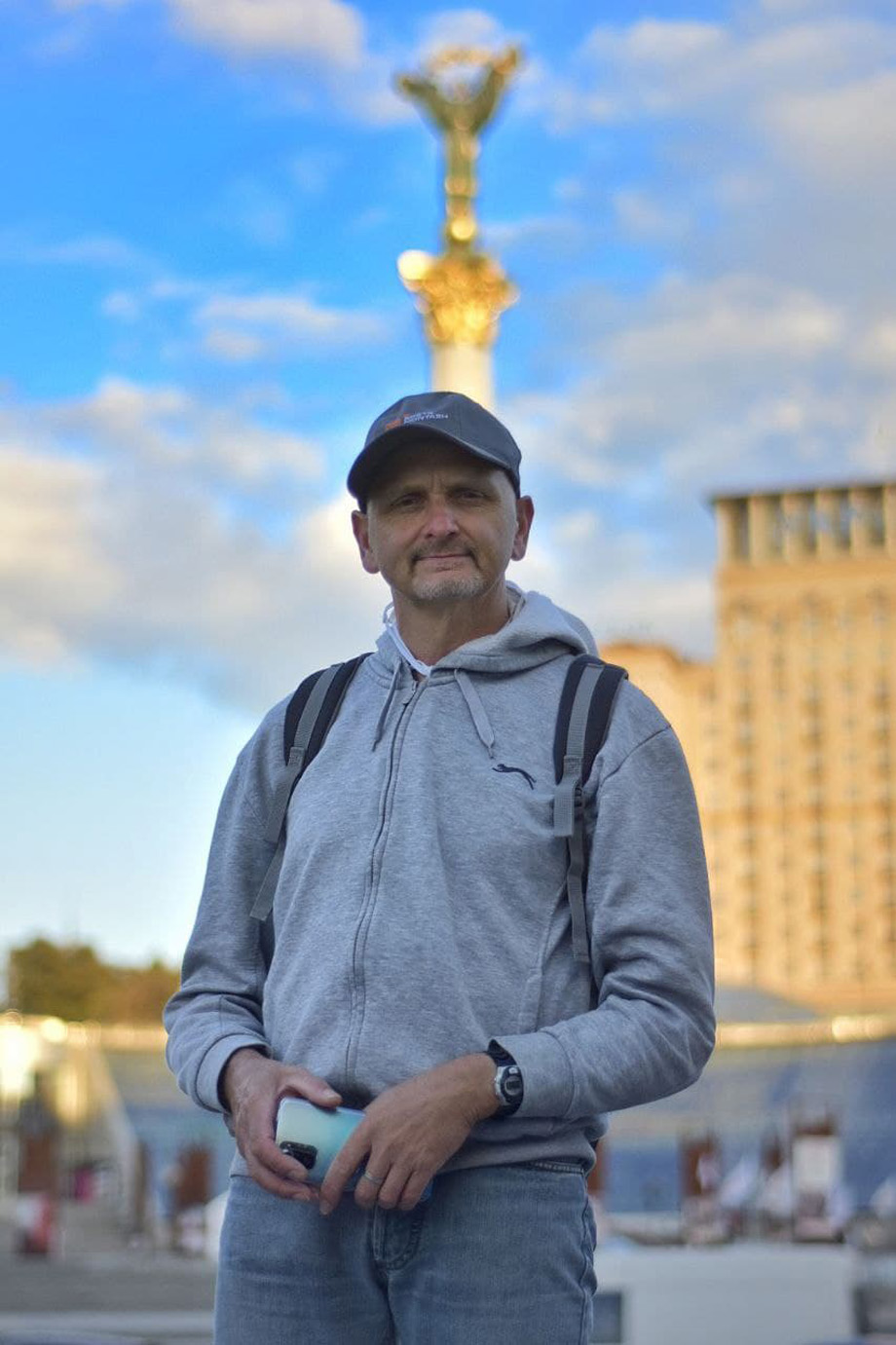 But I believe you kept in touch?
“I didn’t just close the book on him, no. I would visit that prison sometimes twice a week. And I was due to visit Ukraine first in 2020 – and then came Corona.”

But you eventually made it to Ukraine?
“I rescheduled the visit to September 2021. I had two fantastic weeks traveling around from Kiev down to the sea of Asov and met some very lovely people. Kiev is a lovely, very friendly city. And six months later here I am campaigning against the Russian invasion.” 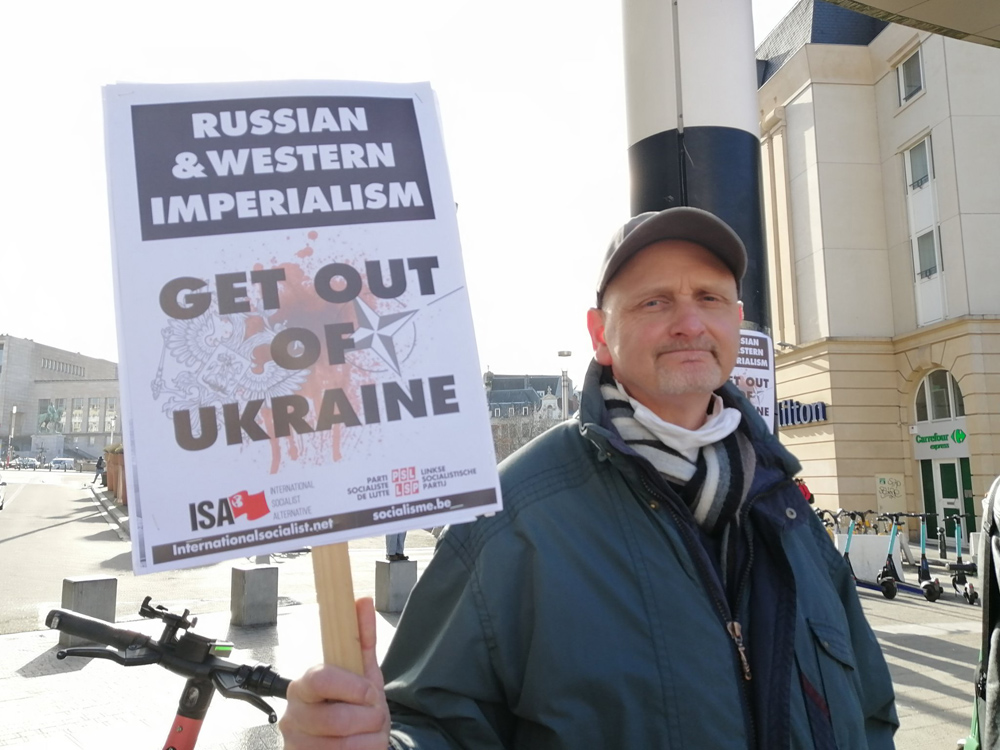 You’ve been vocal in your support of Ukraine.
“I’ve been to three protests so far and will keep it going. I have even been banned from the St Petersburg Festival Ballet’s FaceBook page. But it now looks like their Belgian shows won’t go ahead.”

We asked Ian if during his visit there was a sense of dread regarding a Russian invasion?
“Not at all, everyone was aware of conflict in Donbas but there was no inkling of the current conflict, the build up to that only began in December 2021. Whilst Donbas to the east is Russian-speaking and the people there align themselves with Russia, in the west and in Kiev the people speak Ukrainian and see themselves as Europeans. But it’s such a vast country, after Russia the second largest in Europe. Incidentally, Putin refuses to acknowledge Ukrainian as a language. The thing with Ukrainians is that they’re so used to getting a raw deal; Stalin – World War Two – Chernobyl – the Russian annexation of the Crimea – the Donbas conflict, that they’re a little resigned to it all. And they’re also resigned to the fact that they’ll never get the Crimea back. However they’re resisting strongly and President Zelensky has been a rock; he was offered asylum in the USA but refused, choosing to stay with his people.” 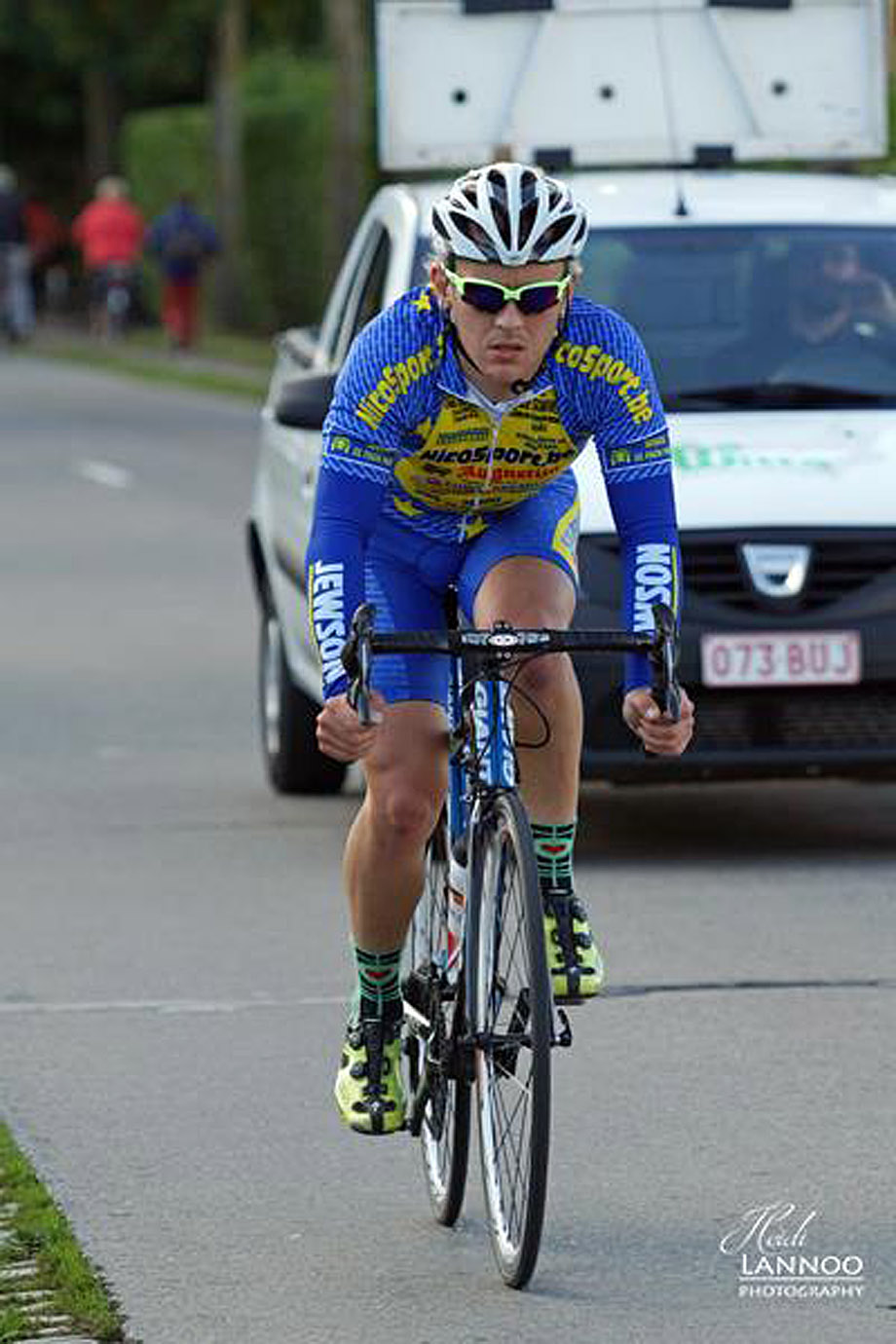 What of Michael?
“He was fortunate that he was visiting relatives in Poland when it all kicked off, his father is from a Polish background. Michael’s girlfriend has joined him and his mother is safe in Kiev for the moment”

So you’re keeping in regular touch?
“Yes but it’s a strange one because on the one hand I love to speak with him but on the other hand I dread that when I pick up the phone he’ll tell me something terrible has happened. I’ve stopped watching the TV news, it’s too upsetting to see the beautiful places I visited now with Russian armoured vehicles rolling through them causing death and destruction.” 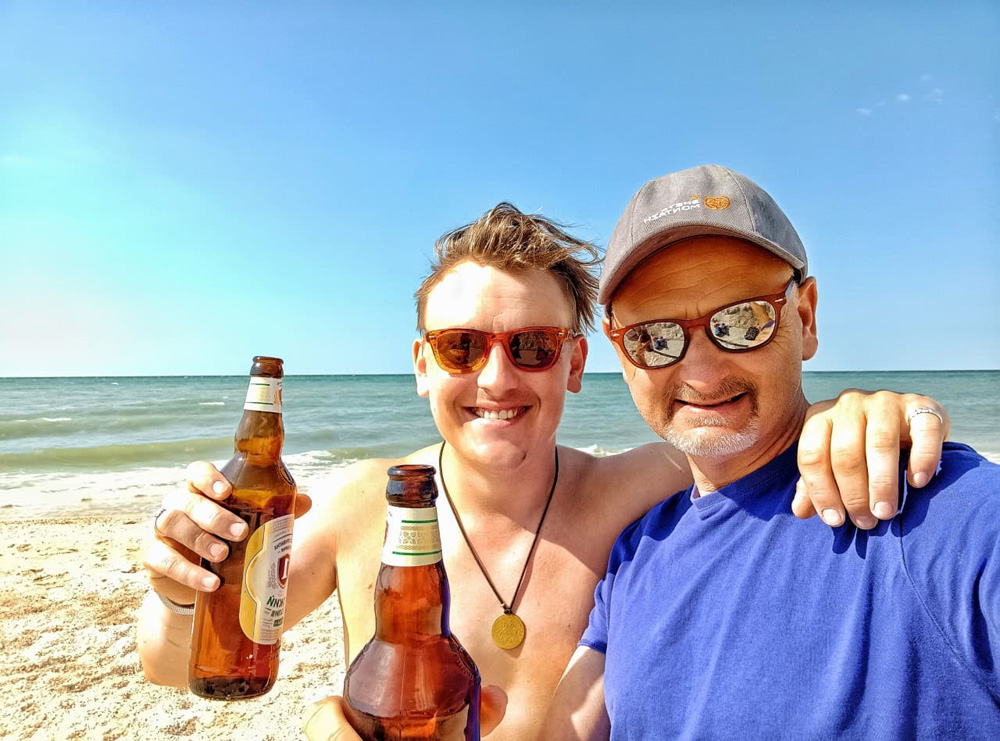 # The last time we spoke with Ian he was busy loading a van bound for Ukraine with food and clothes – we join him in saying a prayer for Michael’s family and all the people of Ukraine. #