Cervelo’s Dan Fleeman first came to our attention when he won the 2008 Tour of the Pyrenees – we’ve kept in touch with the 26 year-old Englishman ever since; through Langkawi, Paris – Nice and into the Ardennes classics. But a bad crash in the Bayern Rundhfart stage race saw him break a wrist and spend longer than he would have liked, off his bike. But he’s back in action in the Tour of Britain and will be racing right through to Lombardia.

We packed the notebook and camera; bundled Viktor into the car to keep us company and headed for the Scottish Borders on Sunday night – after the T of B stage two – to have a chat with ‘our boy.’

PEZ: How have the first two stages been, Dan?
Dan: Stage one wasn’t too bad, the break went early and it looked like it might stay away but they were stopped at a level crossing, then Wiggins went to the front and it ended in the sprint – which Sutton (Cofidis & Australia) won. Stage two was a harder day, with the wind and the break still had two-and-a-half minutes with seven K to go – two of the three came back but Reus (Rabobank & Holland) stayed away to win.

PEZ: What’s your goal for the race?
Dan: I was top ten here last year, it would be good to match that – the crunch days will be Wednesday and Thursday. 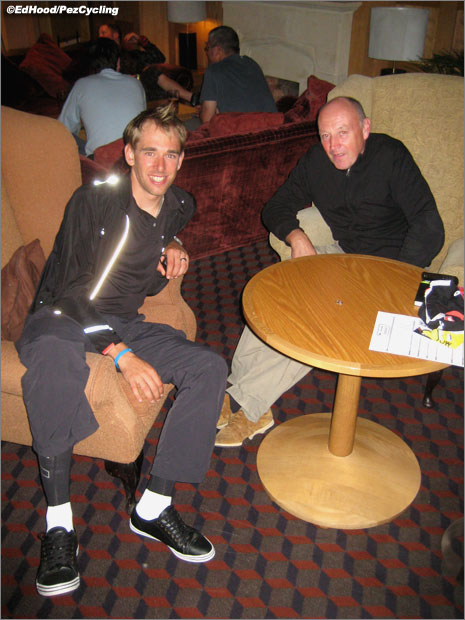 PEZ: What are the team goals?
Dan: Martin Reimer (German Elite Road Champion) is good for the sprints and there’s Dan Lloyd and me for the GC.

PEZ: Is the Pro world as you expected?
Dan: Pretty much; but if you take this race; last year it would have been a big race for me, but this year it’s one of the smaller races I’ve ridden. It’s hard to explain, but when you’re in a Pro Tour race – maybe with the same riders as you raced against in a non Pro Tour event a few days before – it’s so much harder; everyone raises their game in the Pro Tour races.

PEZ: What’s the difference between your last team, AN Post and Cervelo?
Dan: About 10 million euros! At AN Post, the manager Kurt Bogaerts did just about everything, but here there’s a member of staff to handle each activity – like there’s one guy who books all the fights, for example.

PEZ: Tell us about the broken wrist.
Dan: It happened in the Bayern Rundfahrt, originally I was in a cast – but that was to be on for three months! The team sent me to a specialist in Switzerland, who pinned it; the day after the operation I had virtually full movement in my wrist. It was the lay off that caused me problems, they wouldn’t let me ride on the road, I could go on the turbo but it’s not the same. I fell behind during that lay off.

PEZ: Have there been performances you’re happy with, this year?
Dan: Not really, I had a solid top 20 in Lugano at the start of the year then I caught a virus at Paris-Nice. One of my strengths in 2008 was that I was very consistent but this year I was feeling it after two or three days racing. But around the time I broke my wrist I was tested for the UCI biological passport and my blood values had dropped; our nutritionist reckons that it was caused by a stomach bug – that couldn’t have help. 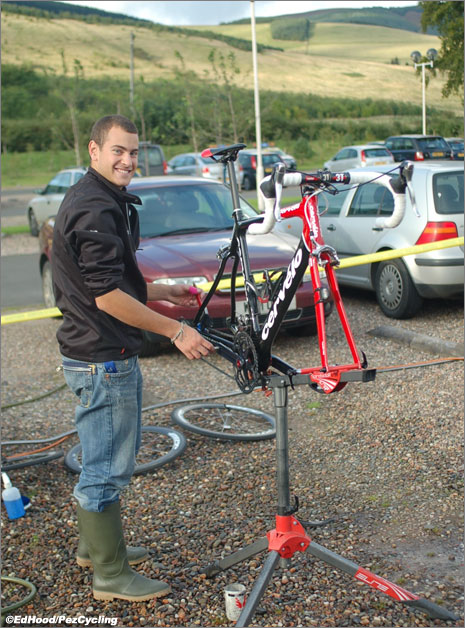 Dan’s Cervelo gets a washing.

PEZ: Any ‘with hind sights?’
Dan: Not really, I haven’t made any mistakes; I’ve looked after myself and kept on top of the job – but I’ve had bad luck.

PEZ: Do you train differently now you’re at this level?
Dan: I might actually have trained too hard at the start of the year; I think because you ride more races and they are much harder, you perhaps should train a little less. One of the big differences with being in a team like this which has a very cosmopolitan race programme I that you spend so much time travelling – I’ve made maybe 50 or 60 flights this year and that takes it of you.

PEZ: What’s the best thing about the job?
Dan: Doing what I love and getting to travel – seeing different parts of the world. 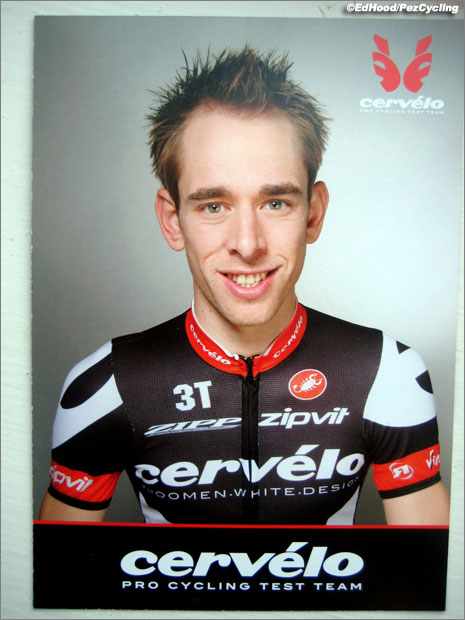 Dan wasn’t in Paris for the finish of the Tour de France…but his picture was.

PEZ: And what’s not so good?
Dan: Not a lot, but I could do with a private jet, like Lance has! The flights are hard work sometimes, with delays and suitcases getting lost. What really bugs is that the budget airlines charge you an ‘extra’ for absolutely everything; but if they’re late there’s not so much as an apology!

PEZ: What does your wife think about you being away, so much?
Dan: The longest I’ve been away is two weeks, to Langkawi, in a team like ours, there’s not actually a lot of point living on the continent because the programme is so varied – as long as you live near a good airport. I live near Birmingham International; I’ve been lucky with flights this year, most races I’ve been home the same night!

PEZ: What performances do you think you have within you?
Dan: I think can be a solid rider and some one who can do well in the 10 stage races.

PEZ: No Grand Tour in 2009.
Dan: No, that was disappointing; I was supposed to do the Giro but my DS said it would be better to wait until the Vuelta but then I broke my wrist and I’ve not had the racing to ride a Grand Tour.

PEZ: What’s next?
Dan: After the Tour of Britain, maybe the Worlds then all the late season Italian races, up to and including Lombardy. 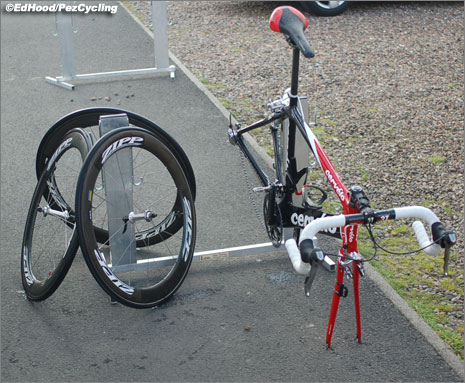 PEZ: Why should our readers buy a Cervelo?
Dan: When I got my new Cervelo, I rode it round my training circuit, that’s nine miles; I ride on a power metre at a given output, on the Cervelo at the same power level, I was 30 seconds faster – it’s very aero, very fast, like a time trial bike.

Advert for Cervelo duly done, it was time to leave Dan to get off to bed; the next day (Monday) we received this SMS; “stupid ISD p***k pushed me off with 20 km to go, wacked my head hard enough to split my helmet in two. Limped home, be sore tomorrow!” Next day, we duly enquired how the stage went; “felt good on the bike, working on the front, last 40 K!” Ahh! those pros!

***
With thanks to Dan for his time and better luck for the rest of the Tour of Britain.