Cervelo TestTeam’s Dan Lloyd wasn’t long off the bike after his epic piece of team riding, on a day when The Tour of Flanders enhanced its reputation as one of the world’s premiere sporting occasions, when he took a little time to talk to PEZ.

The Three Days of De Panne, April 2004 and I’m interviewing Dan Lloyd of the Flanders team in his ‘no-star’ hotel, just off the square in the seaside town; the team has only one time trial bike between them and there are no real wages – but you do pay your dues.

Fast forward five years to De Ronde 2009 and one of the ‘men of the match’ is the Cervelo man from Christchurch, England; he’s riding for one of the best teams on the planet and has a proper UCI governed salary – those dues are paid in full.

Dan wasn’t long off the bike after his epic piece of team riding, on a day when The Tour of Flanders enhanced its reputation as one of the world’s premiere sporting occasions, when he took time to talk to Pez.

PEZ: Congratulations Dan, your first Flanders and you’re right there, involved in the action.
Dan: Yeah, I’m pretty pleased, but I was just saying to one of the guys in the team that if I’d been with one of the smaller teams then I’d never have been able to do a job like that. There’s so much knowledge and experience in the team, it was Andreas Klier who told me where and when to go.

PEZ: What was the Cervelo game plan?
Dan: Roger Hammond and Hayden Roulston were designated to go with the early breaks, but as it happened, there wasn’t really the opportunity; we did 50 kph for the first two hours. Hayden crashed at 110 K and twisted his knee, so he couldn’t continue, but at the Berendries climb we had seven guys in the right part of the race. 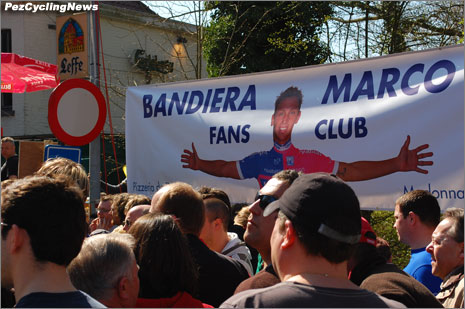 Marco Bandiera was a part of Dan’s break. He had quite the following on the Muur.

PEZ: Tell us about your move.
Dan: It was around 180 K after the Oude Kwaremont, on the descent of the Paterberg, Andreas Klier said; “if you have the strength, go now!” I attacked and Chavanel, Hoste, Quinziato, Guesdon and Bandiera came with me; we rode until the Berendries (216 k), where Chavanel attacked and I couldn’t respond. 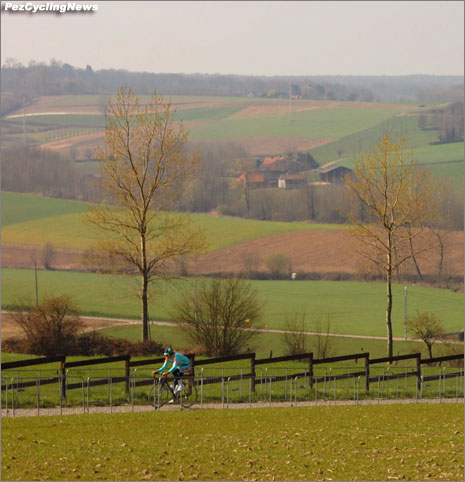 Lloyd attacked just after the vicious climb of the Paterberg.

PEZ: Did you think there was a chance it might go all the way?
Dan: I didn’t think that, but I thought that maybe we could get over the Kapelmuur at Geraardsbergen and I’d be able to help the other guys. I could see that Chavanel and Hoste weren’t flat out, so I tried to keep a little back, I was conscious that I was riding a little above myself and didn’t want to over cook it. 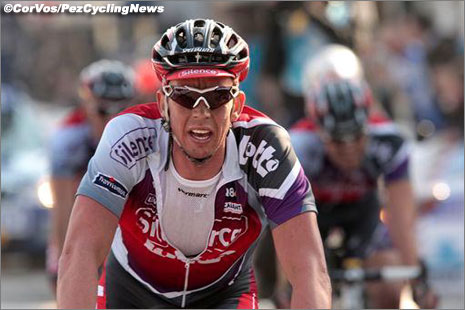 Hoste may have come away empty-handed again, but he’s looking good for next Sunday.

PEZ: What was the hardest part of the day?
Dan: It was just generally hard all the time! The fighting for position is always tough, but because of the weather it wasn’t nearly as bad as it is if it’s windy and raining; it was a fast race, it only took six hours (average speed 43.455 kph).

PEZ: Is that the longest race you’ve ever ridden?
Dan: Probably, in the end I rode in with Gabriel Rasch, I was 45th at 5:38. Heinrich Haussler was second and if Thor Hushovd hadn’t crashed in the finale, he’d have been third – it’s been a great day for us. 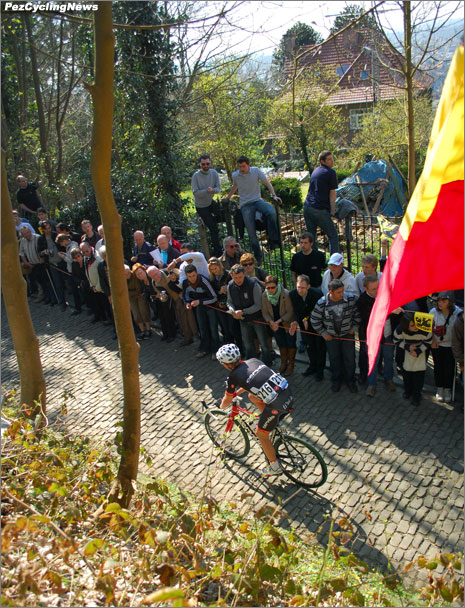 Lloyd rode into Meerbeke with Gabriel Rasch – there’s Rasch plowing his lonely furrow up the Muur to the music of thousands of fans.

PEZ: With your experience, the cobbles wouldn’t trouble too much?
Dan: No, I know the roads in Belgium really well, but we did a course recce on Tuesday just to familiarise us with everything. If you don’t know the roads, you can be sitting, nicely positioned in the top 20 going into a corner; but 50 guys will swamp you in the last couple of hundred yards – a few years ago that would happen to me, but I’ll be one of those 50, now.

PEZ: I believe its wild approaching the climbs?
Dan: It’s very stressful, yes – but the good thing about today was that when you’re in the break, you don’t have to worry about that; we went over some of the hardest climbs as a group of six or seven.

PEZ: It was unseasonably warm today, does that affect what you eat and drink over such a distance?
Dan: Not really, the team is really well organised and we had helpers out on a lot of the climbs with bottles. As for food, I made sure that I ate a lot in the first part of the race; some of the guys are old school and eat rolls, but I go for energy bars and gels. The Zipvit products we use are really well made, with good ingredients and I never have any stomach problems with them.

PEZ: I heard the crowds were exceptional.
Dan: Unbelievable! I was getting emotional, I’ve never thought I’d ever race through crowds like that; I was getting goose bumps on my arms and legs. 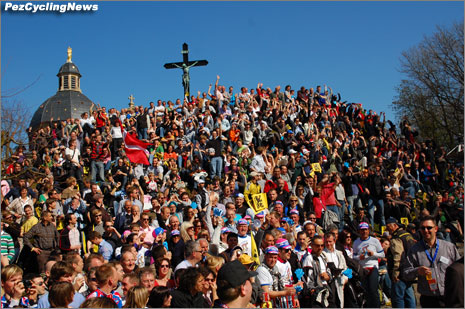 Exceptional would be a good description.

PEZ: What about your bike, today?
Dan: It was just my usual road bike, the team has slightly different machines for Paris – Roubaix but I don’t think I’ll be riding that. I was going to fly home tonight, but I’m staying on until we see how Hayden and Thor recover; I might be riding Gent – Wevelgem to replace one of them.

PEZ: Any lessons learned today or ‘what ifs?’
Dan: No, it was perfect; I did my job and took the pressure off my team at an important time in the race. 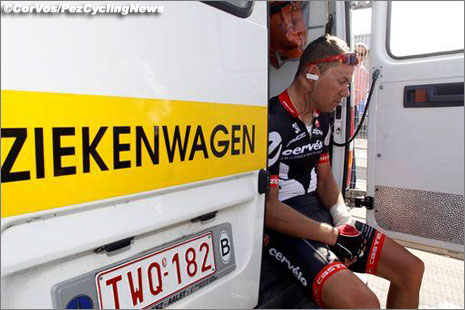 Dan might be riding Gent after Thor’s horrible crash in the final meters of the race on Sunday.

PEZ: Do you notice the Belgians raising their game for Flanders?
Dan: They’re all ‘up’ for it, yes – it’s the biggest race of the season, if you’re Belgian. They all peak for it and you notice that everything is up a notch.

PEZ: Biggest losers today?
Dan: Not our team or Quickstep or Silence-Lotto, we all made the podium. Maybe Rabobank; Pozzato and Boonen were the strongest; Boonen’s team has the win but Pozzato came away with nothing – even though he had the legs to win.

PEZ: QuickStep?
Dan: Devolder was very strong; six guys chasing him and not making an impression.

With thanks to Dan for taking the time to talk to us and wishing him well for Gent – Wevelgem.