Bert comes on the line and in his typically Belgian manner – straight forward and warm – we talk for the first time since last Spring’s interview. His 3rd place in Kuurne last weekend is proof his form is great, but no reason for a party … as he explained…

ON THE BIKE AT K-B-K
PEZ: Hello Bert!

Bert: Hello Richard – how are you?

PEZ: Congratulations on your excellent race at Kuurne-Brussels-Kuurne!

Bert: Yeah but – I got beaten by a fellow American of yours – so I’m a little bit disappointed… (laughing) 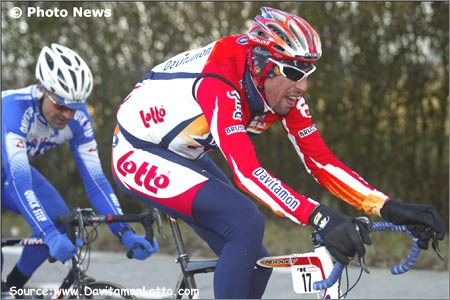 Bert used his TT prowess to chase Hincapie and Van Impe – and drop the rest of the field on Sunday.

PEZ: Well, a couple of things – first is that I’m actually Canadian…

Bert: Oh! Well excuse me then…!

PEZ: I guess if get beaten by just two guys and one of them is George Hincapie, then things are looking pretty good…

Bert: Yeah well – For the team – we’re a ProTour team and we only think of victories… For me personally, 3rd place is very good, but the team isn’t going to throw a party because I got 3rd place. We had 8 guys in the front and there were only 30 guys left in the race… in theory you have to win the race but it’s not always that simple…

PEZ: Can you take us through the last Kilometers of the race – what was it like out there?

Bert: For half the race there were 10 guys in front, and then we hit the hills – the Kwaremont and so on… where the peloton broke apart. The Quickstep team began to chase the break down, then on the local circuit everybody started to attack – also our team because we still had seven riders in the front. There were 2 laps of about 10km around the finish – and we were a group of about 25 guys with 1 lap to go. Then it broke again and we had 3 or 4 riders from the team in the first group.

I had to do some work on the front, and there were attacks and then with 5-6 km to go Kevin Van Impe attacked and George Hincapie reacted immediately. I saw it and I looked 1 second behind me to the other riders, and then I reacted, but I think because I hesitated for half a second – I was 4-5 seconds behind them and couldn’t close the gap …

And then at the finish I was 14 seconds behind…

PEZ: Could you tell if Hincapie was really strong?

Bert: He was good, but it didn’t seem like he over-classed everybody – good but not super. But I expect he’ll improve a little bit more before Flanders and Roubaix… But if you win a race like Kuurne, it’s never a surprise – it’s because you are always in the front and you have the legs… with the weather and the parcours there are difficulties to overcome. 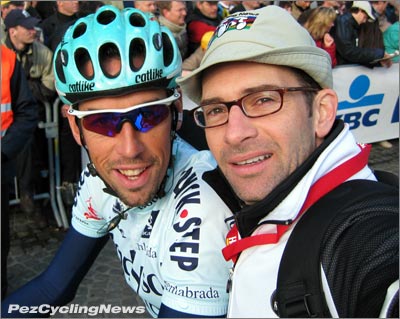 Here’s Bert and moi on the start just before Flanders ’04 – just before Bert tried to program my phone.

FORM ON FIRE
PEZ: How did you feel – you must have some excellent form right now.

Bert: I feel very good – my condition is very good. I had a very good winter – so I knew from the beginning of the season I’d have good legs for the races…

I did some races in February in Portugal with the team– two stage races and there I felt the condition and the legs were good… In all we have already 15 victories with the team. So everybody was looking at us to perform this weekend in Belgium.

Saturday we had many riders in the front group (at het Volk), but we didn’t win, so today in the newspaper there’s a lot of criticism that we didn’t ride the right tactics…

PEZ: How cold was it there – it looked like it was freezing…

Bert: Augh! It was very very cold – it was –2 degrees Celsius at the start, and there was a northeastern wind – so if felt like minus 15! Everybody was warmly dressed with leg warmers and hats and everything – all the clothes. It’s such a cold weather to be really explosive – when you have to sprint or tackle the climbs – it’s not like normal. You could see the speed drop because it was so cold.

PEZ: Your father in law told me you were really motivated for this race – you have great form now, so this must really help your motivation for the classics?

Bert: Well the team made a program for me that has mostly small stage races which really starts the first half of April – so just after the Classics. But maybe with my performance yesterday it’s possible that they’ll change my program a little… I asked them at the first training camp that I’d really like to do Paris-Roubaix.

The 3 Days of De Panne has a time trial, so they asked me to focus on that. [Bert’s the Belgian National TT Champ- ed.]

I was not really happy with that – I thought maybe it was a little bit of punishment because I’m too good a rider in the time trials so they made a program for me completely based on that. So I don’t have to do a lot of the Classics, but maybe this will change now that they’ve seen my condition is good, and I worked all day for van Petegem – and I chased down the last guys in the break. 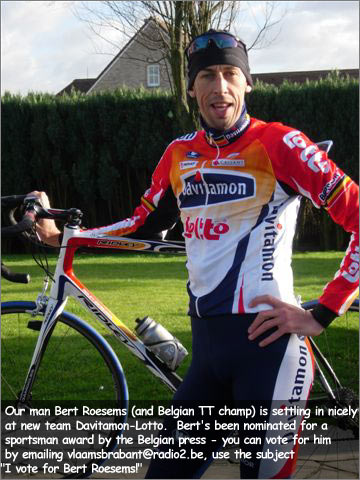 Bert was nominated for a sportsman award in Belgium by his country’s media – partly because of his national TT title won in 2004.

PEZ: Last year you rode with Relax-Bodysol – which was partly sponsored by Davitamon. How is it on the new ProTour team this year

Bert:Last year we had 9 Belgian riders on the team, and 6 of them made the move to Davitamon-Lotto. And we had a lot of riders come over from the former Lotto-Domo team, and then the new guys like Henk Vogels, Fred Rodriguez and Cadel Evans. So we’re a Belgian team with a section of Australian riders.

ON THE AUSSIES
Pez: How do you like the Australian guys – they must add their own “personality” to the team…

Bert: Oh yeah yeah yeah… they’re like … how would I say it…. They can put things in the right perspective… they’re less stressed sometimes than the Belgian riders… I raced with Nick Gates in Portugal, and Cadel Evans and I saw Robbie McEwan in the Tour of Qatar, and this weekend I raced with Henk Vogels…

Pez: Okay… do they like to go for a pint after the race?

Bert: Well – I can think of a few Belgian guys who like to do that also – so that’s no problem… (laughing).

PEZ: Thanks for chatting with us Bert, and best of luck…

Bert: Well we’ll try again next time – we’re only at the start of the season!

Read Our 2004 Interview with Bert Roesems.