Former Polish road and time trial champion, 28 year old Tomasz Marczynski (Vacansoleil-DCM) from Krakau has been riding a very consistent Vuelta; his nine top twenty stage finishes have brought him to the edge of the magic top ten in only his second Grand Tour. Ed Hood caught up with the talented up and coming rider on the second rest day to get his take on the Vuelta so far.

Marczynski took out his first pro license in 2006 with Italian squadra Ceramica Flaminia, the same year he landed second place in the Polish Elite Road Race Championship – an event he has excelled in over the years.

The following year he topped the podium in the Polish championship and rode a diverse programme with Ceramica – from Portugal, by way of most of Europe, to Mexico and seventh in the Olympic test event in Beijing.

In 2008, still with Ceramica, he won a stage in the Tour of Asturias and took second overall in the Classica Alcobendas.

The following season he was in Miche-Silver Cross colors, riding a largely Italian programme.

That run of foreign teams was interrupted in 2010 when he headed back to Poland and CCC Polsat for two seasons, enjoying an exotic programme – a stage win and the overall in the Tour of Seoul, fifth in the Tour of Hainan; but then returning to Poland for third on GC and a stage in the Szlakeim Grodow Piastowskich. 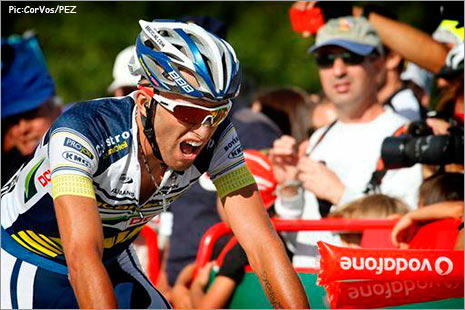 Last season he pulled on the national champion’s jersey in both the elite time trial and road race and still at home took two stages and the GC in the Tour of Malopolska.

This season, in the service of Vacansoleil-DCM, has been a mixed one – he won the sprints competition in the Volta Ciclista a Catalunya and took third in the Rund um Koln but was involved in a bad crash in the Giro which left him with stitches and broken ribs.

But by the Tour de Pologne he was back winning the mountains classification and in good shape for the Vuelta.

He took time during the rest day to talk to PEZ about what has been a great Tour of Spain, thus far. 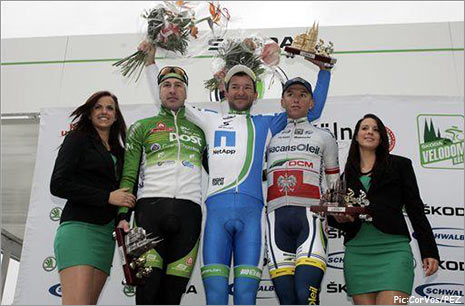 On the podium in Kцln.

PEZ: King of the Mountains in Poland – that was a good omen, Tomasz.
TM: Yes, after the accident at the Giro I had one month with no bike then I started to train again.

I built things up for the Tour de Pologne and to win the mountains was satisfying – then I had three weeks training at altitude in the Sierra Nevada.

I rode the Tour de l’Ain after that and knew I was in good condition.

PEZ: Third in Koln – that’s a sprinters’ race?
TM: That was right after the Pais Vasco and I was in good shape – but I actually feel I should have done better than third in that race.

PEZ: Up until now the furthest you’ve race has been 12 stages – in the Giro?
TM: I had the crash in the Giro on stage 10 but kept going until stage 12 with two broken ribs and stitches.

But after that, I couldn’t go on, the pain was too much. 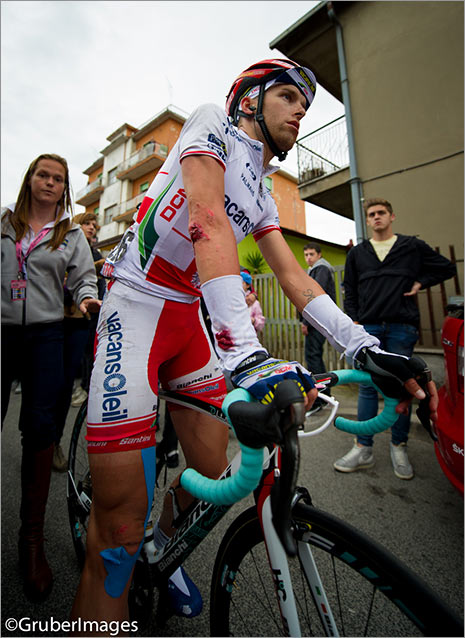 Tomasz after his nasty crash at the Giro in Frosinone.

PEZ: You’re 16 stages into the Vuelta, how do you feel?
TM: The stage yesterday (Cuitu Negru) was incredibly hard and I’m glad we have a rest day, today.

I’m hoping I can recover well for the last five stages.

For now, I feel pretty good and have been going better as the race goes on; but before the race I wasn’t thinking top 10, maybe top 20?

PEZ: What was the Vacansoleil-DCM plan going in to the race?
TM: Normally Thomas De Gendt would be going for the GC, but after the first stages it was decided that he would go for stage wins and the DS decided that I should go for the overall.

Thomas has been riding well in the breaks and just missed out, yesterday.

PEZ: You had a good ride into Barcelona – fourth.
TM: It was a really good result for me, yes – Gilbert and Rodriguez were clear but only Tiralongo was better than me from the peloton at the end.

PEZ: The time trial – 43rd were you happy with that?
TM: I didn’t feel so good that day, it wasn’t a good ride but it wasn’t a bad ride – a normal time trial for me.

PEZ: You’ve had nine top 20 stage finishes.
TM: For me it’s very important to be consistent – I think it’s the main quality you require for three week stage races.

I hope to be able to continue like that.

PEZ: You were strong on Ancares and Covadonga but not Cuitu?
TM: That was a very steep climb and I’m almost 70 kg; there are sections which are more than 20%.

But it wasn’t just about the steepness of the last climb – the previous climbs were fast too and the speed into Cuitu was very high.

PEZ: Do you think climbs like Cuitu are maybe too crazy?
TM: For sure they’re really hard – but it’s the same for everyone.

PEZ: What about the heat?
TM: For me it’s no problem, I’d rather race in 40 degree heat than in cold rain! 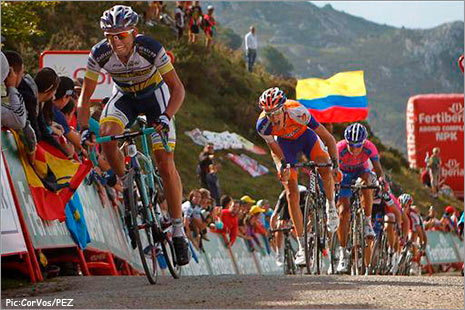 PEZ: And a top ten finish?
TM: I’d like to try, I’m 49 seconds behind Nicolas Roche – but what I have to be careful about is that I have some strong guys just behind me.

Benat Intxausti (Movistar) is only 34 seconds back and Maxime Montfort (Radio Shack) is at one minute, like I said, they’re strong riders and I have to watch for them, tomorrow to Fuente De and on Saturday to Bola del Mundo.

(Ed: Indeed – Tomasz had a tough day to Fuente De (as did everybody!) and conceded some GC ground. He’s now in 13th overall, 3 minutes off of new 10th place, Benat Intxausti.)

PEZ: How is Thomas’s morale?
TM: He rode well yesterday, they’re two strong guys – they got a 15 minute gap, but Cataldo was just that little bit stronger at the end.

It’s better to win, but second on a stage like that is a good result – and he‘ll be on the attack again before the end.

Anything can happen – we’ll see!