Paris – Tours has been won and lost, but what was it like to ride? PEZ caught up with Cervelo’s Dan Lloyd right after the finish of the Fall Sprinters’ Classic. Its was Dan’s final race of 2009, so a perfect time to get his thoughts on the year that was.

PEZ: Is Paris – Tours a race you like, Dan?
Dan: I really like it, you have to be able to position yourself in a bunch then there’s the wind and a very technical finale. We rode the last 60 K after Paris – Bourges, during the week. The team was under strength though – Brett Lancaster didn’t start, he’s been sick and Gabriel Rasch came down with a cold, today.

PEZ: Who was the protected rider, today?
Dan: Roger Hammond, he’s had very good form since the Vuelta; we were all working to protect him; all except our German champion, Martin Reimer – he was a given a free hand to ride his own race. Unfortunately, Roger was in a bad crash after the feed; Jez Hunt brought him back up; but Rog has hurt his hand pretty badly. Coming into the finale, we were all in the front group, but an Euskaltel guy crashed and caused a big pile up. I had to brake right down, I didn’t come off but the loss of momentum meant that I couldn’t get back to that group; that was the group Boonen and Gilbert attacked from.

PEZ: What was your job for the day?
Dan: To be with Roger and Martin in the last 50 K; Martin got ninth at the end. 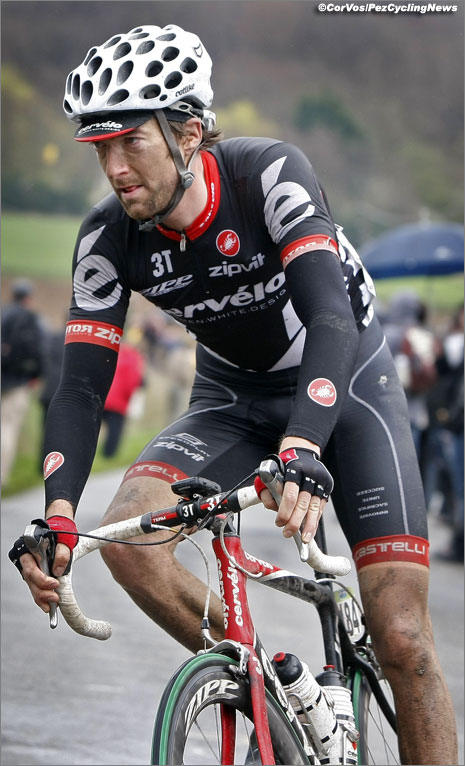 PEZ: Is that good enough for management?
Dan: Oh yes, he’s a young rider and this is his first major classic, that result bodes well for next season.

PEZ: Those six kilometers before the Avenue du Grammont look pretty tricky.
Dan: The roads are small; it twists and turns, the climbs are short, steep but come after you’ve covered a lot of distance.

PEZ: Is it true it’s a race that requires a lot of concentration?
Dan: For most of the distance it’s flat and open, so the wind can play a big part; you have to be alert in case there’s a split – then the finale is pretty technical.

PEZ: How tough are the three ‘cotes’ in the last 10K?
Dan: They’re short but pretty steep; they’re actually tougher in training than they are in the race – in the race you hit them at 55 kph and are half way up before you know!

PEZ: You were 43rd at 1:00; did you contest the bunch sprint?
Dan: No, after being help up by the crash, I just pretty much rode in.

PEZ: What happened to Greipel?
Dan: He was sick and was off the back, early. Farrar got held up in the same crash as me – I just about got through but the Euskaltel guy was rolling about the road and I wasn’t sure where he’d end up! Somebody slammed into the back of me but I managed to stay upright.

PEZ: Are the days of mega bunch sprints are over for Paris-Tours?
Dan: There’s not going to be 150 or 200 man bunch finishes, unless there’s a block head wind. It would have been a different finish today if there hadn’t been the crash but I think with the technical finale is going to be a maximum of maybe 80 riders together. 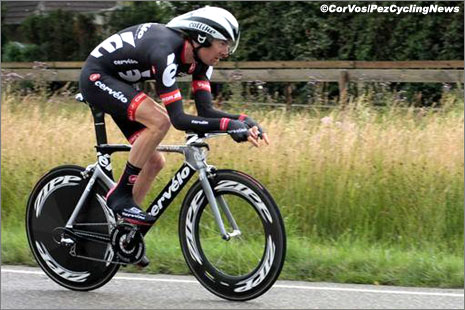 PEZ: Were you happy with your Worlds [DNF]?
Dan: It was good; we were all working for David Millar and partly for Steve Cummings. We did a job for David but he crashed early then punctured at a bad moment. It was a good rehearsal for Melbourne next year, where Cav has a good chance of winning. The team’s performance perhaps wasn’t as visible as folks back home would like to have seen; but the riders were satisfied with it.

PEZ: How many more races, this season?
Dan: I’m done! I’ve got my flight home at 07:00 am tomorrow and I think I’ve picked up Gabriel Rasch’s cold; so I’ll only have one or two beers.

PEZ: That’s your first year over with Cervelo at Pro Continental level; how has it compared to your years with Continental teams?
Dan: Mainly the structure of the team; we go into races like this with a fair chance of winning. With my last team – AN Post – getting into the break or achieving a top ten placing would be a good result. The big difference is that if you were sitting in 50th spot in the bunch with AN Post, then you’d probably be best of the team. But here, if you’re sitting 50th then you’d probably be one of the furthest back the bunch out of the team and you think; ‘I better move up!’ A lot of it is just attitude.

PEZ: How much of a winter break do you have?
Dan: I have three weeks completely off the bike, unless it’s a really nice day, the sun is out and I fancy going out. I have the Brave Heart dinner in Scotland at the end of October then I start on November 2nd.

PEZ: 2010?
Dan: I’m focused on the Spring Classics – I want to put in a good winter of training to be ready. It’s good for me to have a period where there’s no travelling and I can concentrate on getting out and riding. I want to focus on Flanders and the cobbled classics and maybe Milan – San Remo; but there are only eight spots in a race and there are ten or eleven riders in this team who are capable of making the cut – you can’t take anything for granted!

***
With thanks to Dan for his time and hoping he enjoys his three weeks of rest – soon it’ll be time for Het Volk though, Dan!