Inside The U23 Worlds TT With Alex Dowsett

We’ve said it before; ‘if it’s the real deal of a race, Pez will have a man in there!’ Today’s World Under 23 time trial championship at Mendrisio was no exception – 20 year-old GB rider, Alex Dowsett was only 16 seconds away from bronze, in seventh place.

PEZ: Congratulations, you must be happy with that, Alex?
Alex: I’m very happy, I think I got it all out – I was only 16 seconds away from a medal, but I don’t think I could have found that time anywhere.

PEZ: What were conditions like?
Alex: It was dead still, well maybe a little breeze; before the start I was debating whether to ride a Zipp 808 or 1080 on the front; if it’s windy, you just can’t ride the 1080 because of the depth of the rim catching the wind – but in the event I rode it with no problems. It seemed the same all the way round, constantly hard. 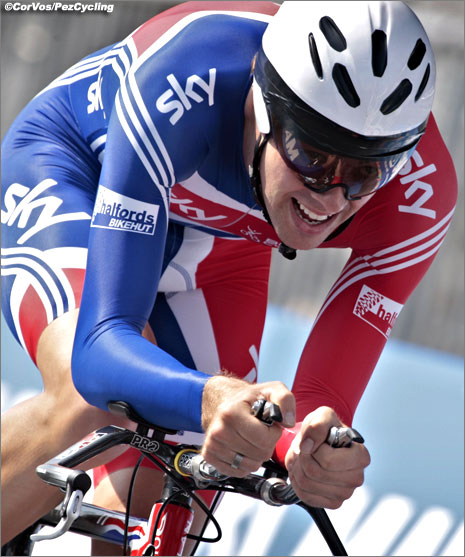 Alex in the waning moments before the line and a great 7th place finish.

PEZ: Whilst it was relatively flat and fast, it didn’t seem like a course for the mega gears?
Alex: It was a quick course but you could have damaged yourself on really big gears, there were little drags all the time and you had to have a decent cadence to punch up them, not tie up.

PEZ: Any ‘moments?’
Alex: I had two – I was on a downhill stretch where you go through a roundabout at 60 kph, but a motorcycle marshal was going through it at about 40 kph; I had to break down from full pelt – and swear!

Then, after I caught the Swiss guy (Schnyder) he re-passed me on the climb, I was about to re-pass him through the town when he took a strange line through a corner. I don’t know what he was playing at, but I was looking at a brick wall and had to back off – I got round him out of that section.

PEZ: ‘What ifs?’
Alex: No, I’m happy, all you can do is to ride as hard as you possibly can – I did that and I’m happy with my performance.

PEZ: That’s the same circuit as for the Elites?
Alex: Yes, except they do three laps to our two; it’s a quick course but it looks faster than it is – I thought that the winning average speed would be 50 kph plus, but I think that Jack’s winning average was high 48’s. The surfaces were good, but it does require constant effort – it looks like it’s been designed for Cancellara! 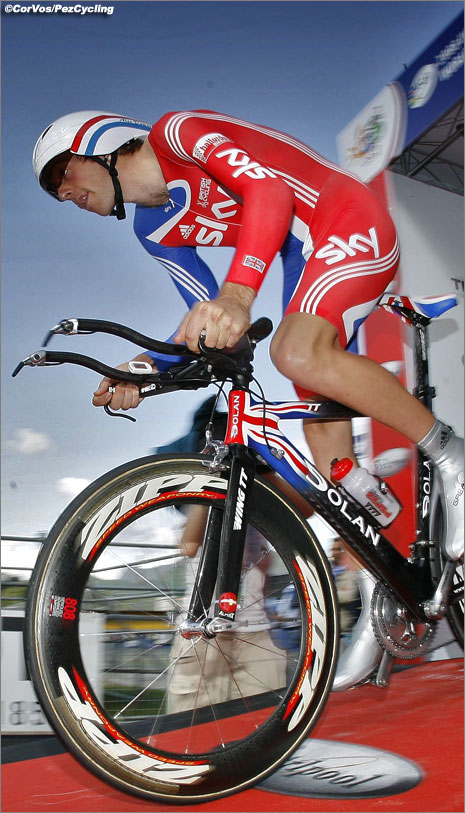 Alex starting his time trial in Varese in 2008.

PEZ: Even the bronze medallist, Gretsch was struggling on that hill.
Alex: It was a lot harder than it looked, I went round in training and went up in the big ring, but when you were racing and coming into it off that effort, it was hard. There were false flats at the top; it didn’t just drop over the summit.

PEZ: What was your goal before the start?
Alex: To be honest, I didn’t have one, I was worried about how today would go –last year, I prepared well, but it went wrong on the day. I had no goals as far as finish position went, I just wanted to get round as best I could. I have raced that much this year, I’ve been preparing for this; seventh in the World, I can’t be unhappy with that.

PEZ: Bobridge?
Alex: Phenomenal, he’s a class act – he won the TT in the Bayern Rundfahrt, beating all the top TT guys. I’ve been talking to him through the year and he was really ‘up’ for today – he said that he didn’t think it was really best suited for him; he wanted it harder with more wind.

PEZ: How has 2009 been for you?
Alex: Not the best, I’ve had problems – I lost too much weight and with it, a lot of power. In Italy it’s important that you keep your weight down, but I over did it and it lost me two or three moths out of my season. I’ve really only done two good rides; 11th in the European time trial championships – and now, today.

(It’s interesting to note that he doesn’t mention recently winning the British Under 23 time trial championships as a noteworthy performance!)

PEZ: The road race?
No, I’m not riding; this is my last race of the year, although I will be riding the British track championships at the end of October.

PEZ: And 2010?
Alex: I have no idea, yet. I’ve been talking to a few teams but it all depends on what British Cycling want to do – I’m not sure yet, but I have a few options.

***
A duel with a motorbike and a minute man – sounds like wearing on for 16 seconds to us! But not to worry, he gets to ride again, next year. With thanks to Alex for giving us his time and an insight into what riding a World Championship is like.

PEZ Chats With Tom Zirbel Before His Huge Ride