A member of the growing pack of English-speaking pros in the Euro-bunch, Allan Davis turned pro with ONCE in 2001, and has been with Sr. Saiz ever since. But we found there’s something even more nerve-racking than a 65 kph sprint for the Aussie – like being a dad for the first time…

At the beginning of the year, a few folks were surprised to see Allan Davis and Liberty Seguros crossing the line first in a sprint. Not the least of which were perennial fast men like Zabel, Freire, and Hondo… Despite being fairly young (he’s only 23), Allan has come to Division 1 through what the system that all U-23 programs should be patterned after, AIS (the Mapei sponsored Australian Institute of Sport). The number of top quality fast men coming from that part of the world is just plane huge. When you look at how many are in the peloton it seems like 95% of them are winning something… It’s just not fair! 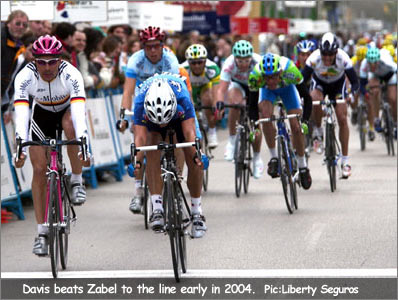 But there’s more to Davis than just a finishing kick and he is being considered a rider in the Sean Kelly, Eric Zabel mold – men that have the ability to win a field sprint, but with that unusual dash of heart that allows them to get over a hill or two on the run in.

It was great to have Liberty’s press man Javier get us a few minutes on the phone, and we tracked Allan down just after his massage at the Vuelta Castilla y Leon, as he was just settling in. We started off with a few questions about the critical aspects of any pro…

FAMILY TIES – Micro
So where are you living and is the family there with you?

Allan: Oh Yeah, my fiancй Andrea is here and the baby, Brooklyn. We are living just a bit outside of San Sebastian, which is perfect for this job. We are right up toward the Basque country.

Ah! with all the political troubles of late, are you pretty safe riding? I mean are there places where you would rather be in a Euskadi Kit than one from Liberty?

Allan: No no, not at all. One of the great things about being here is that sport and Cycling is popular. The support from the public while on the road really makes it all work out. Spain is a great place for riding on the whole and there are places, like where I live, that are better than good.

Here in the states, it seems like everyone in a car has something to prove and riding is just a pain some times. I know it’s better received in most of Europe, but what’s it like back home in Australia?

Allan: The same as the states, or like it. It’s not the same as being here that’s for sure. We get the fair amount of road rage back home. That said, I like going back for the weather in the off season, and I can get the miles in well enough, and it’s always nice to be home just because it’s home.

Back to the Family, I just had a baby girl and was wondering what that is like for you?

Allan: Well she really runs the house! It’s a whole different world with her. All the power points are fixed for safety and now that she’s moving around, nothing’s safe! 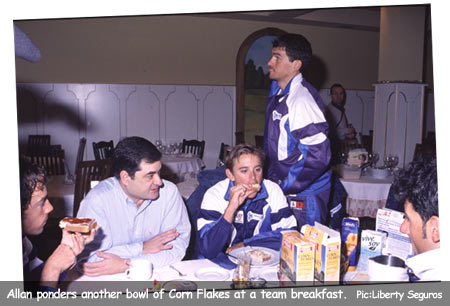 And um, are you worried that she’ll meet someone like you when she grows up?

Allan: (Laughing, then a try at serious) we’ll try and support her decisions and uh… let her be her own, uh um she… uh,

Because I remember what I was like and I just had a little girl, so I am scared to death and she’s only 9 weeks old…

Allan: (Laughing again) Yeah I am worried. Very worried. I wasn’t before, but now I am… Thanks a lot!

I managed to hold out for weeks before changing a Diaper, How’d it go for you?

Allan: Nah, You just have to dive right in, I did it pretty quick. Andrea’s is great, and she takes care of so much that I have to try and do my part. No way around it because she does so much. 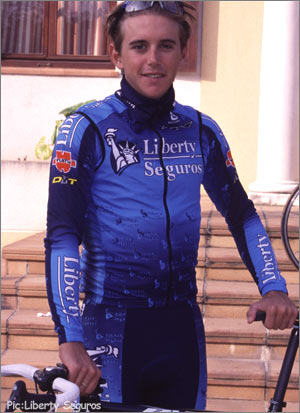 FAMILY TIES – MACRO
So everything is going well at Liberty?

Allan: Oh absolutely. I really like it here. Not much to want for.

Back when ONCE decided to stop, you were one that didn’t go running off in a panic, I didn’t read about you asking around. Were you worried, given that sponsorship rumors tend to be nothing more than rumor?

Allan: No I really felt pretty secure. You can get nervous, but I had a lot of faith in Manolo and was so happy with the team (as ONCE) that I wanted to be there. I wanted to make sure that I gave it every opportunity.

A lot of riders seem to put a lot of trust in Manolo. What is it that makes him who he is to you?

Allan: Loyalty. And that he’s such a “what you see is what you get” kind of person. There is black or white with him, no gray. You just listen to what he’s saying and don’t have to mess about trying to figure out what he means.

Allan: It is, yeah. And he is. He’s the boss, but he’s also a friend and someone that you can talk to and not worry about what you’re saying. Being honest is easy…

So the choice was easy to wait for Manolo.

Allan: Yeah, but not just Manolo, but the team is such a great team. The staff, the atmosphere, it’s just a place that you can be and only need to worry about what is important. There are a few new riders, but there was a great core and the newer guys fit well. We’re a team more than a business, and that is not always the case.

Allan’s room mate came in and he needed to get to the phone, so we finished up with a few quickies…

Talking food, what do you get at races and from the hotels?

Allan: At the hotels, they get a menu and we usually get pretty similar things, a salad, almost always pasta or rice, and a meat. We get a lot of the same kinds of things, but it gets prepared the way they do locally, so there is a nice change…

What about on the bike, us recreational, would be pro’s seem to have all manner of gels and special supplements…

Allan: We usually eat pretty regular things. Some cut up fruit, maybe muesli or some other little sweets, but it’s usually real food.

Speaking of bikes, are you a high tech guy that likes to tinker and fuss on the Equipment?

Allan: Not really, no. As long as the seats in the right place I just ride. I don’t fuss much with kit.

Lastly as your room mate is nagging for the phone, do you have any good – bad stories about room mate habits? Anybody tough to live with, snoring, or lacking in hygiene???

Allan: Laughing, we trade room mates a lot and it helps us to all get along better… These guys are all pretty good, so nothing really bad stands out. But you might want to ask the other guys about me!

Check out the Liberty Seguros Team website at www.LibertySegurosTeam.comand tell ‘em PEZ sent ya!
Like PEZ? Why not subscribe to our weekly newsletter to receive updates and reminders on what's cool in road cycling?