Anyone who saw the Giro d’Italia last year couldn’t miss the lone Fassa guy left at the front of the race on the high mountain passes, the same guy who’d been pulling Petacchi to the sprint finishes the previous week. In today’s first part of our interview, we talk with Dario about his new team, his role as an engine on FassaB train, his ascent to Grand Tour gc rider, and his love for all kinds of cycling. 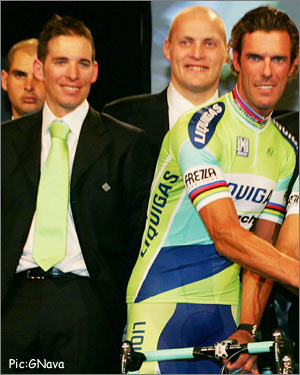 Dario Cioni went pedal for pedal with the climbing prowess of Gilberto Simoni and the newly crowned wunderkind of cycling, Damiano Cunego at the 2004 Giro d’Italia. The modest former professional mountain bike racer secured for himself 3 top five finishes in the grandest spring stage races: the Tour of Romandie (5th), the Giro d’Italia (4th), and the Tour of Switzerland (3rd). Continuing his winning ways, he also became Italian National Time Trial Champion.

He would have been able further to prove his capabilities in the 2004 World Championships, but a high hematocrit level, which was soon to be proved natural for Dario, unfortunately kept him off the team.

For 2005, Dario has joined a powerful line up on the new Liquigas-Bianchi squad, including Stefano Garzelli and the lion king himself, Mario Cipollini. In the hunt for another super successful year, Dario nevertheless took the time to talk with PEZ about his 2004 successes, his preferences between mountain and road racing, why not every rider should be judged by 50, and what his plans are for 2005. PEZ just sat back and enjoyed the ride. 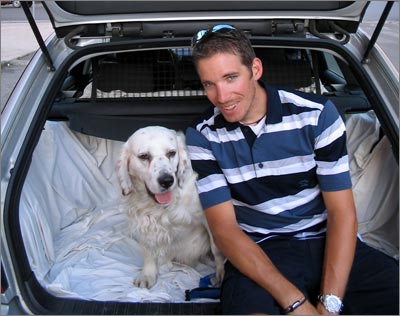 Dario and his dog Leo.

THE GOOD WORKER
PEZ: During the Giro you called yourself a “good worker”, and then in quick succession you finished 5th in the Tour of Romandie, 4th in the Giro, and 3rd in the Tour of Switzerland. How do you account for your great success? What changed in your training or mental outlook?

Dario: No, I just think that I had a chance to race my own race. I had placed well in the Giro in previous years, but I always had a responsibility to look after other GC riders, and this time I had the chance to work for myself, which meant that I was able to do very well.

PEZ: You have been an important member of the lead out team for the currently most powerful sprinter in the pack, and somewhat coincidentally, you will be racing this coming year with Mario Cipollini who is perhaps one of the greatest sprinters of the generation. What are some reasons for Fassa’s enormous success in its lead out?

Dario: Petacchi is so good because he finishes off very well. I have already acted as lead out for Freire when I was at Mapei, but he is a completely different sprinter because Freire likes to do things his way; get the job done on his own sometimes. Now, our sponsor likes more organization in the sprint lead out. But I wasn’t part of the real core of leadout men. Especially in years before, I had to start pulling at the front at a long distance from the finish, so I wasn’t really in the thick of it by the end of the stage. And instead this year, I had to pull a little less, and start pulling closer to the finish, so that I was still able to concentrate a little on my own GC position. 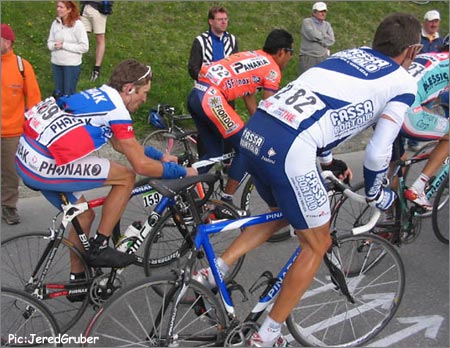 Cioni proved himself both as leadout man for Petacchi and a climber in the ’04 Giro.

NEW YEAR, NEW TEAM
PEZ: You left Fassa Bartolo now to co-head Liquigas. In fact Ferretti, the tough-as-nails manager for Fassa Bartolo, has been quoted as saying you are the only one of the 8 or 10 riders who left Fassa at the end of this year, that he was sorry to see go. Why did you leave the team when one of the toughest mangers in cycling would have wanted you to stay? And what are you looking for in your new team?

Dario: I left not because I was having a bad time in the team. Okay, I joined Fassa from Mapei, and Mapei was a different story because I had been racing for their mountain bike team, and then when they started their development team in 2000, I was asked to join that, even though I was a little old to be on it. When Mapei decided to fold, I had to find another option, and was looking for the best deal and opportunity. But last year when we were trying to renegotiate my contract, Fassa would only commit to one more year, with a second year as an option, all contingent on whether the sponsors renewed the team license. But I was looking for a longer deal, and a bit more security. And Liquigas gave me the chance to stay in Italy on a different team. And the team is all fresh with new energy and new goals and team plan. So I’m excited to get going and see what I can do there.

PEZ: What will be your new roll on the team?

PEZ: Do you know which tours this year you’re riding? For which races will be leader?

Dario: Yeah, I will start the Giro as a co-leader with Garzelli and then my schedule also includes the Tour de France. But we’ll have to wait and see what my role will be in the Tour, because a lot can change between now and May and between May and July. So we’ll wait a little to see how things develop.

PEZ: How much did your success at the Giro affect your career and your decision to move on from Fassa?

Dario: Uh, well. I don’t think it really had much of an effect at all. Anyway I was just looking to stay in Italy. But I think it would have been the same. Okay, maybe the fact that I was able to do well when given a bit of a free hand made it easier to get a leading role in a team. With a new director, and new staff, having a few good large tour results in your pocket, makes it easier to form a reputation with people you haven’t worked with before. Maybe they wouldn’t have chosen me to play the role of co-leader. The same sort of thing happened when I joined Mapei. From my mountain biking they knew I could be a man for the mountains; maybe not at that time for the GC, but someone to stay close to the GC guy and help when the races hits the hard mountain stages.

PEZ: Being such a – for a cyclist and climber – relatively big guy, how do you climb so well? Where do you focus your training?

Dario: I’m lucky that I can keep a pretty high power output. That’s a reason that I am pretty good in time trials too. And it’s the reason that I can climb with other pure climbers. The other climbers might be smaller and lighter, but I have a greater power output, so I am able to keep up with them. But I’m not what I would call a real climber.

PEZ: Do you then consider yourself a good time trialist or are you just an all around good rider?

Dario: I think I’m an all around good rider. I can go pretty well in the mountains and on the flats. I try to improve a little here and there, but I don’t have any great weaknesses.

DIRTY ROOTS
PEZ: As you say, you did start out as a mountain biker. Can you give us a bit of background to your switch from mountain biking to road racing?

Dario: Yeah, I professionally raced mountain bikes from 1992 to 2000. I had raced world cup and world championship races for Mapei. But I was left off the Olympic squad twice, and there really wasn’t a reason that satisfied me for this exclusion. So after the 2000 Olympics, I started looking around for a professional road team, but since I was already on the Mapei development squad it seemed like the best place to get into road racing. You see I had always been a mountain biker, but I was curious to see what I could do on the road. And road racing is a lot more prestigious than mountain biking, so for me turning to professional road racing was a step up. I knew more or less what I was capable of in mountain biking, so I was really interested to see where I could go on the road. 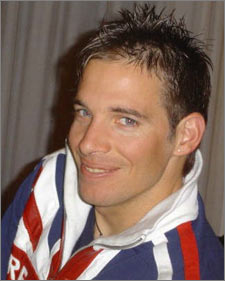 PEZ: Do you prefer road racing, or do you enjoy any bike, no matter the sort?

Dario: I’d say that I enjoy all types of bike riding. I do cyclocross too, and of course mountain biking. Now I can say I also enjoy road racing, though mountain bike racing was more fun.

PEZ: Yeah, sometimes it can be sort of stressful out on the road, and it’s nice to get deeper into nature and woods and stuff.

Dario: Yeah, that’s for sure, but also I like the people around mountain bike racing. They are a lot of fun. Road racing can sometimes be more rewarding; for instance when you have tons of people cheering you over a mountain pass, that can be a real thrill, and you certainly don’t get that sort of interest in mountain biking. But on the other hand, the actual mountain biking was a bit more fun.

PEZ: I see; are the people more laid back, and the races less stressful?

Dario: Yeah, of course. Mountain biking feels more like a family, and road racing is a bit more like a company.

Check in Thursday as we talk more about Dario’s big tour aspirations, and how his naturally high hemocratic level worked against him.

Soon you can check out Dario’s new and improved web site at www.dariocioni.com

On Board: DISCOVERY CHANNEL Sponsor Ride