When things get really, really bad, it usually means they’ll only start getting better. Dave Zabriskie hit that hardpan twice in the last 2 years, but with a Grand Tour stage win, a new stars & stripes champs jersey, and a new contract – he’s well on his way to better things.

So picture this: you’re on top of the world, riding for perhaps the best team in the world and riding well, you think you got it licked. You have a great 2002, then a great start to your 2003, still performing well and picking up some good results. Then an SUV helps you out with a severely bad unplanned high-speed dismount and you end up with half your body broken, and your season cooked by late Spring. 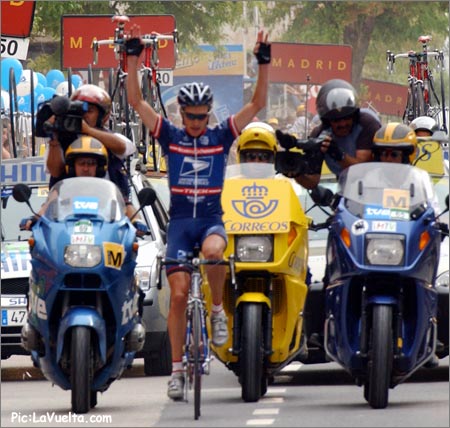 It’s all over but the champagne and podium girls as Dave takes a most stylish solo win in the 04 Vuelta.

You come back in 2004 only to dump it hard at Redlands in March, but you’re back in April and you win Men’s Elite National Time Trial Championship. Then, you put some more fitness together, and kick some serious ass in the Vuelta A Espana, winning a stage on an
epic solo break. Then it’s off to a respectable 5th placing in the 2004 Worlds TT. Ups down, highs lows, and one big transfer. You go from riding WITH a Tour winner to riding FOR a Tour winner. Welcome to the world of Dave Zabriskie.

Recently we played 20 questions with Dave, as he chills after this big comeback year, and makes ready for his move to Bjarne Riis’ Danish squad. And as always, we got the important stuff outta the way first…

Dave, thanks for talking with us. Do you read PezCycling much?

Excellent answer! In 2003 your broke your leg and wrist when a car nailed you, then you sustained serious coco-bonk at Redlands this year. Did these injuries ever make you think about stopping, and what really motivated you to stay fit, train, and comeback?

Dave: After the accidents, I did think about stopping, but I just
did not want to go out like that. I knew it wasn’t the time for me to stop. Motivation to continue came from friends, family, my girlfriend, my team, and my contract.

What do you do to get your focus or your mind around a
time trial since it’s what you’re known for.

Dave: I look at a time trial as if all of the roads have been closed off, closed off just for me. I can go as fast as I want, and of course, I want to go fast – really fast. Listening to music on the trainer helps put me in the right mood. I also do a lot of visualizing. I picture the course, the conditions and my expected performance. I try to go over everything so that when the officials’ last finger drops, all my emotions disappear and I can concentrate on going really fast.

Is there one race you’d really like to win that you haven’t
– which one and why?

Dave: I would like to win the TT at Worlds. Who wouldn’t want to be a world champion?

Dave: I’m very excited to be riding for CSC and Bjarne next year. I
don’t think it will change my approach much. As I try to learn from all the people I meet, I will work to learn as much as I can from Bjarne. I’m sure Bjarne has his own unique knowledge of cycling and I’m really interested in learning it.

Do you think the CSC kit is cooler looking than US Postal’s? I mean, let’s face it, CSC’s has got to be one of the coolest around!

Dave: The CSC kit is very nice. I think the coolest thing is people
probably won’t yell “Hey Lance!” at me any more when I’m training.

Which GT do you want to compete in next? Vuelta again?
Tour? Giro?

Dave: I’ll do whatever CSC has in mind for me. The Giro looks like
a good one though…

When you won the stage at the 04 Vuelta, did you think
“there, I definitely will get a contract somewhere, from someone?

Dave: Not really. I was not even thinking about contracts at that
time. After my second bad accident I told myself to just take it to the end of the season and see what happens. Luckily, some good things happened. I’m just happy to be racing next year. 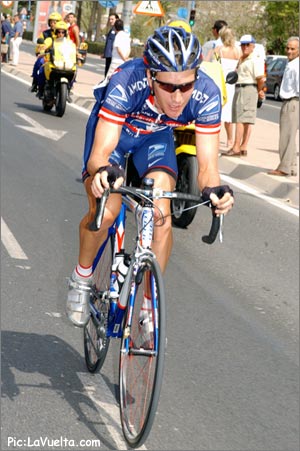 You’re still young (25-26years old) , a long career hopefully in front of you. Have you given any thought to life after cycling?

Dave: Yes I give it a lot of thought. I’m not sure what will happen. Maybe I’ll hit the roller blading circuit for a few years…

How do you see American cycling growing in Europe? Rising? Falling? About the same 10-15 names?

Dave: I think it might slow down for a few years, but there is
always new, up and coming talent. Once the riders developing
in the U-23 program mature, I think you will begin to see new
faces and talent competing in Europe.

What about doping? How bad do you see it as of now, and
how do you see the doping problem in 5 years?

Dave: It’s a disgusting problem in cycling. I think that WADA and
USADA are taking their jobs very seriously and their work should help the sport in the long run.

Do you look to spend your whole career in Europe, or would you like to race a domestic schedule again in the future?

Dave: Well, after I kick around on those blades a bit, I wouldn’t
mind doing some racing in the States.

What music are you listening to these days and what’s your favorite training music? I’ve been into Slipknot lately.

Dave: The last few days I’ve been training to The Roots, The
Marshall Tucker Band, and Nazareth. Today I just bought the
new Nick Cave and the Bad Seeds and an old David Bowie.

Dave: I’ve been working my way through “The Blank Slate,” by Steven Pinker.

Is there a favorite race in the U.S. for you? How about
Europe?

Dave: In the states Super Week is probably the best time I’ve had
racing. In Europe, I’d have to say the Tour of Denmark.

What was the moment in your career where you suffered the absolute most during a race?

Dave: Definitely racing for the national team in Germany. I had a bad pain in my Achilles, but a doctor said it was ok, and so, I kept on pushing it. When I left that race I couldn’t even walk. It took 6 months to get better. That experience taught me to listen to my body more and listen to the doc a little less.

How do you think the Pro Tour will affect your schedule and is it a good idea?

Dave: I don’t know if or how it will affect anything. I think many people who are against it think cycling is a very established sport and shouldn’t be changed or rearranged. Perhaps they are right, but I don’t think there is any problem trying it out for a couple of years.

What do you plan to do with your off season?

Dave: During the off season I try to get everything ready for the
next season.

And here comes the PEZ SPEED ROUND:

Ever date a podium girl?
– No

Exorcist or Jaws? Which is scarier?
– Exorcist

Thanks Dave, for taking the time for us here at PEZ. I’ll personally hope to see you in Georgia, where I can arrange just the right music for you in the start house of the TT!

Psych it Up! Mental Suffering