In Erlenbach, Switzerland, we recently met the secretary general of the European Cycling Union UEC – Mr Roland Hofer. As the race director of three ProTour events, he offers a unique PEZ-spective on international racing, the UCI ProTour and how to run the perfect road race…

Just Who Is Roland Hofer?
By way of introduction, Roland Hofer is 62 years and has worked for more than 35 years in the cycling business. His palmares are impressive – he reorganized the 1967 Tour de Suisse – served as vice-president of the professionals’ international cycling union FICP – was co-founder of the UEC (and is currently secretary general of the UEC), the European Cycling Union, together with Hein Verbruggen in 1991. He’s also a member of the UCI and the AIOCC (Association International des Organisateurs des Courses Cyclistes). Plus he’s a delegate for the EOC, organizing youth games to get youngsters attracted to cycling. If that’s not enough, Mr. Hofer is also the race director of the Tour of Germany, and the former World-Cup and now ProTour race in Hamburg, and before that he organized the Zьrich World-Cup race for 10 years.

Does he know a few things about running top level races? Read on and see for yourself… 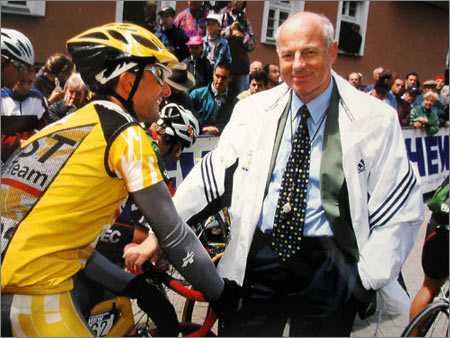 PEZ: Have you been a pro cyclist then?

RH: To be honest, no, I have never competed in a single road race! Playing ice-hockey, handball and soccer on amateur level, I came in contact with cycling when starting to work for Swiss Cycling. Right now, I enjoy playing tennis whenever I have time and I work on my cycling condition, too! Covering around 3000 kilometers per year, my goal is to cycle around the Lake Zьrich (68 km) within less than 2 hours time. Up to now, I did not manage to do so – due to the many traffic lights on the promenade in Zьrich-City, which always forced me to stop!

On The ProTour
PEZ: You are racing director of three UCI ProTour events: The “Cyclassics” in Hamburg, the “Metzgete” in Zьrich and the Tour of Germany. Now in March, the UCI ProTour will have its debut. During the past months since its announcement up to now, the ProTour has been criticized a lot. – What is your personal opinion about this reform, what are its advantages and disadvantages?

RH: Hein Verbruggen was searching of a way to bring the world’s best cycling teams together at the best races of a season. Starting with Paris-Nice, the best 20 teams of the peloton will compete in 27 ProTour races (one-day-races as well as stage races). It is right that there are some aspects within this new system which are not completely clear yet, but time will tell. Generally, there are some races which are now classified lower than before, which might cause some of the sponsors to change. There have always been higher and lower classified events, so we have to see how the new system will work; but it is also important to see that the ProTour teams will not only compete in ProTour events – due to its team roster, they have the possibilites to be at the start of lower classified races, and spectators will enjoy this!

PEZ: Where do you see a young rider’s development in that system?

RH: Well, in the new system, young riders have a good chance to grow in Continental or Continental Professional teams. In addition to this, every ProTour team has to have a certain number of neo-pro riders in its rows, which is very important!

PEZ: From your point of view: What will international road cycling be like in 10 years time? Which races will be strenghtened? And what will be the state of one-day-races against the different national stage races?

RH: I am very optimistic that road cycling will grow by the UCI ProTour. As ProTour teams have a 4-year license, their sponsors are ensured of the time their colours will be present in the peloton of the world’s most important races. As for the different races, it is planned to extend the ProTour calendar, so that there’s a chance for other one-day or stage races to get into the ProTour schedule within the next few years. 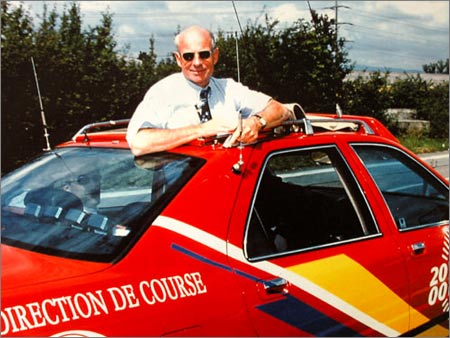 As Race Director –
PEZ: As racing director, you are directly involved in the planning phase of the events in Hamburg, Zьrich and the Tour of Germany. When do you become involved into the concrete plans of each of those events?

RH: For about 6 to 8 weeks after one of those events, we analyze the race, its organization, the good and the bad experiences we made – to do it better the next year! When finishing the de-briefing period, first plans for next year’s race are already waiting to become more concrete. Being involved in 3 ProTour events, they keep me busy all year long.

PEZ: What about the logistics that are necessary to organize such events?

RH: First of all, we have to aquire sponsors to be able to hold such big sport events! Very important for a general set-up of the course is that every village has to give its “okay” for closing their roads for this cycling event. This leads to an early announcement to the people living at or close to the roads of the race – but it still happens quite often that there are still cars parking in the road even hours before the peloton will be passing by! It means a lot of work to get them out of the way, especially if their owners are somewhere on vacation! This even happens in the cities of the one-day races, which are held every year nearly at the same date. Sometimes it’s not easy to believe that people, despite our endeavours, did not know anything about a WorldCup race passing by at that certain day!

PEZ: What are the difficulties in bringing such events into big cities like Hamburg or Zьrich? What is necessary not to cause a traffic jam?

RH: Generally, we don’t have too many problems in getting a pro race organized in a big city as our one-day races are held on Sundays. But you can see it at the 2004 Tour of Britain that this is really not common everywhere. We are very happy to have around 800 to 1200 people working for us around the course, many of them are doing this as a hobby and not getting paid at all! This way, together with the local police, a good traffic management around the finish area is possible.

Making A Great Race
PEZ: No matter if they are riders, spectators or sponsors – all of them want a perfect race. What is necessary to organize a perfect race for all of these groups?

RH: Well, of course, spectators want to see an interesting race with a fair winner. I recognized that a famous rider, who is well-known by the public, is the “ideal” winner for the media. The crowd – which doesn’t consist of cycling experts only – wants to see a winner they know very well. So to speak, Erik Zabel, Tom Boonen, Freire or Valverde, for example, are more-loved winners than somebody absolutely unknown, even if his achievements are the same.

Riders prefer a good race environment and take this as basic to get a good result at the end of the race. This goes hand in hand with their team sponsors’ interests; they want to get their colours broadcasted on TV – which brings their message to the public. Well, and what most people don’t know: TV broadcasting sometimes even influences the teams’ tactics! If the peloton is too lazy and nobody willing to make the speed, it happens that I get a phone call from the broadcasting company, telling me that – if the riders will proceed that way – they will not be able to broadcast live until the finish. It’s my task then to bring the teams taking up speed. I normally do this by talking directly to the team managers in the cars behind the peloton – and like a wonder, a few moments later some of the teams build a train at the head of the field!

PEZ: What is your own idea of a perfect race?

RH: First of all, a decent race organization is a very important factor of a perfect race. Together with a very interesting race and highly motivated riders, a famous winner leads to a high spectator amount. For me, it’s very important that the race is fair and that there are no accidents. In my opinion, the course of a race is not that important as most people believe. If you have a look at the worldcup races in Hamburg or Paris-Tours, which are nearly flat, you’ll see that it’s not the topography which makes a race heavy. In fact, it’s the riders who make a race hard! Just have a look at the big names on the podium of those races.

PEZ: And how close did you come to this ideal?

RH: I am very proud to say that we did manage to come very, very close to this ideal – not in a whole Tour of Germany, but at least in several single stages or some of the world-cup races we have organized. 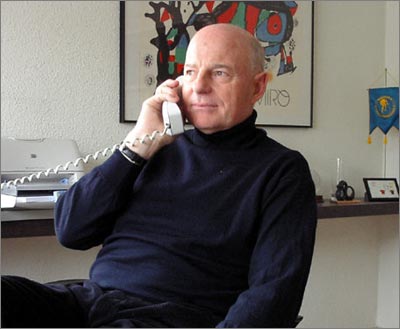 PEZ: What is – in your opinion – the most important ability a race director should have?

RH: As a race director, you should be an expert in the sport of cycling and especially the reglements. You need good communication and organization skills. In addition to this, you need an ability for especially fast decisions and a certain talent for improvisation. I had to prove the latter one during past year’s Tour of Germany, when an impressive group of cows decided to have a jog on the road right in front of the peloton. Coping with such a situation in the right way is essential for a race director.

PEZ: When you have a look back to the 2004 season. What were your personal highlights?

RH: My personal highlights in 2004 were the big wins of the young riders, Patrik Sinkewitz (Quick.Step) in the Tour of Germany and Damiano Cunego (Saeco) in the Giro d’Italia. Meeting both of them at the presentations a few weeks ago proved to me, that they are extraordinary young men, not being arrogant at all. It is fascinating to see them growing and to get their first very big wins. They are the future of cycling, and will attrack the youth to practice this great sport.

RH: For 2005, I wish that the ProTour becomes a success, despite all critics. For the sport of cycling in general, I wish that there will be performed many doping tests, which is necessary to have a clean sport. And I hope that they will be no riders having an accident. – In addition to this, I wish that the Swiss riders will have some more success this year. It would be excellent if Fabian Cancellara could get into a big jersey by riding a great prologue at one of the great tours!

PEZ: Mr Hofer, many thanks for this interview – and furthermore a lot of succes for your races in the future!

Florian is an amateur road racer and PEZ-Man in Germany, studying medicine at the University of Würzburg. He’s currently doing his Ph.D. in endurance training and testing, focusing on metabolic and ergospirometric parameters in cycling performance. Right now, he is in Zurich, Switzerland, completing his final year of studies at one of Europe’s biggest orthopaedic hospitals. You can contact him via [email protected] or have a look at his website www.florianwenk.com
Like PEZ? Why not subscribe to our weekly newsletter to receive updates and reminders on what's cool in road cycling?