Whilst the riders are having massage and dinner, and the fans are ordering their 4th round at their favourite bar to discuss the race, there’s a group of people for whom the hardest part of the day is just about to start – the mechanics. On the cold, dark night after Het Volk, in the car park of the Discovery Channel team hotel at Kortijk, we caught-up with Craig Geater, one of the skilled spanner-men who keep the Pro Tour wheels turning.

To us bike-loving fans velos are gems to be admired; but to the mechanics, no matter how exotic the hardware, they are just tools that have to be washed, maintained and lugged-around Europe. And with tomorrow’s race of Kuurne-Brussels-Kuurne only a good night’s sleep away, it’s down to business for all the team’s mechanics. 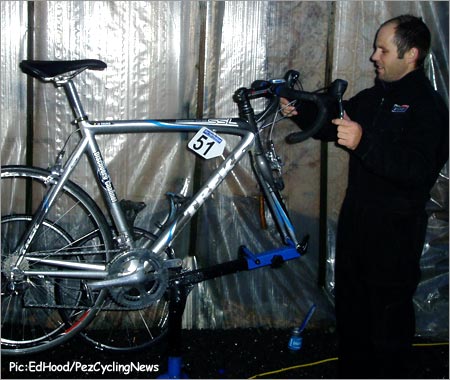 Discovery Team mechanic Craig Geater gets down to business after Het Volk.

Pez: Tell us about this year’s velos, Craig.

Craig: It’s the same Trek Madone 6.9 SSL as we rode at the Tour last year. You can buy one just like it straight off the shelf; even Lance’s frame was 100% stock. 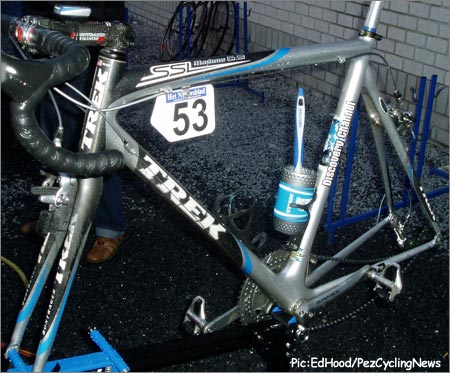 The Discovery Channel’s Trek Madone 6.9 SSL in the work stand after Het Volk. Note the cut water bottle and cleaning brush in the cage.

Pez: But don’t you ride “specials” with more clearance or whatever for cobbled races like today?

Craig: No, it’s the exact same frame we ride in any other race. The only time we ride anything different is for Roubaix and Flanders when we use frames which have an elastomer shock-absorbing damper in the rear wishbone.

Pez: Do you have any problems with them being too light?

Craig: Yeah, last year at the Tour we had to attach weights to the seat tube of Azevedo’s bike to keep it within the UCI weight limit. 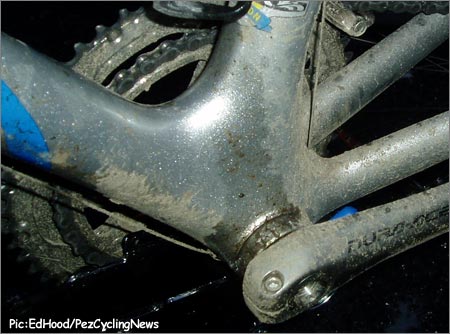 That’s a couple hundred kms of Belgian grit down there.

Pez: Tell us a little about the frames.

Craig: They are obviously all-carbon but with aluminum steerers, bracket liners and fork ends. The seat tube centre line is kept forward of the bracket centre line to make the rear triangle larger and the main triangle smaller in order to equalise stresses. Unusually these days it’s a level top tube and Trek have stuck with Aheadsets rather than hiddensets. If you think about external bearings at the bracket being the ‘new thing’, it’s the same principle at the head, Trek reckon it’s stronger. If it wins you seven Tours de France then why change it? 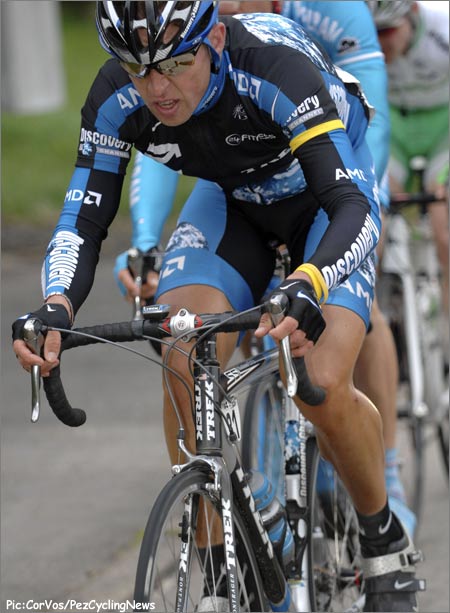 Stijn Devolder and his Trek on the job at Kuurne.

Pez: Talking of steerers – what was the story with George at Roubaix last year?

Craig: George had crashed heavily earlier in the day and we think that the steerer was damged in the fall.

Pez: Are there any little equipment quirks for the cobbles, double tape for instance?

Craig: Not really, Jason McCartney rides with double tape but he does that all the time. The Hutchinson tubs are a bit fatter but that’s the only difference from any other race. It’s also the same Dura Ace groupset as at any other race; everyone is on Shimano pedals too – it keeps things simple.

Pez: I notice that it’s Ultegra, rather than Dura Ace seat pins, why?
Craig: The Ultegra pin is in one piece, so we think it’s stronger than the Dura Ace.

Pez: I see everyone is on aluminum bars.

Craig: Yeah, Levi Leipheimer is the only guy who rides carbon. The problem is that if you crash with carbon bars then you have to change them because there could be an impact fracture in there that you can’t see. 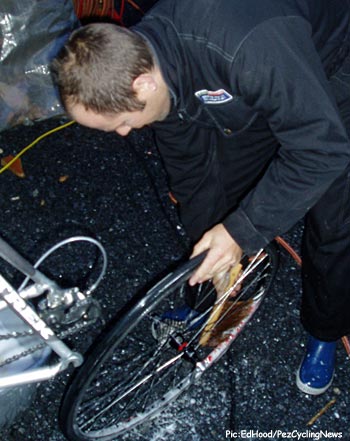 The handbuilt wheels get a hand-cleaning.

Pez: I notice that it’s all hand-built wheels.

Craig: You won’t see many factory wheels on the cobbles. We build these ourselves, DT hubs, Sapim spokes and Bontrager rims.

Pez: You were with CSC, where there were still a lot of aluminium frames used – what about coming to Disco, where everything is carbon?

Craig: In terms of working on the bikes there’s very little difference and I actually think that on a lot of occasions carbon is less liable to damage; ali tubes can dent quite easily. Although we had a broken frame the other day – an airline baggage handling tractor drove-over Steve Cumming’s bike at the airport! As far as the difference between the two teams, it’s not as hard work here as it was at CSC. Discovery’s programme is mainly focused on the Pro Tour but CSC ride a lot more races. 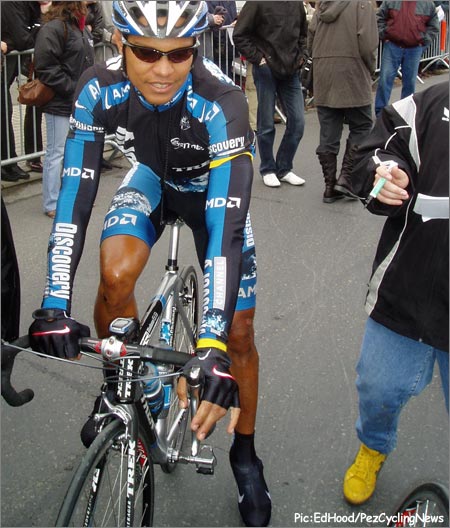 Tony Cruz enjoys the fruits of Craig’s labour the next morning at the start of Kuurne-Brussels-Kuurne.

Pez: I see that there are still ’06 bikes in the truck.

Craig: Unlike some teams, we don’t sell-off the bikes at the end of the season, we keep them and use them for spares.

Pez: So what’s on after Het Volk and Kuurne?

Craig: We do the Three days of West Flanders, Tirreno-Adriatico and then it’s the Classics.

As we headed-off into the cold and dark in search of pizza and pils, Craig took yet another filthy bike from the roof rack to wash, dry, check and lube; and he still had one of the STI shifters to Stijn Devlder’s bike to change after it was damaged in a crash. Labour of love? You bet!