The man they called “the Cannibal” is still hungry. Eddy Merckx, perhaps the greatest cyclist of all time, led a 35-mile charity ride through scenic Marin County to benefit the Oak Hill School in Marin City (www.theoakhillschool.org) for children with autism and other neurologically based development issues. Right before leading the pack out on the road, Merckx talked one-on-one with PEZ. 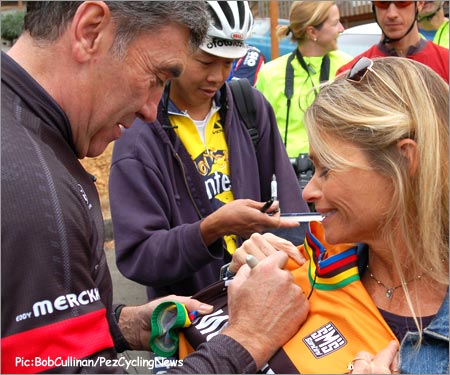 Eddy gave us his thoughts on the future of cycling, and how he dealt with doping allegations during his career. He also refutes one of the great myths of the ’06 Tour de France… the myth that he made a legal bet, and won big money, on Floyd Landis’ epic ride into Morzine.

Although Eddy still enjoys riding, this is his first ride in over 3 weeks due to foot surgery, but he tells us he’s feeling “good. Really good”, and mentions he’s logged 3 rides in the Palo Alto area with Jim Ochowicz prior to this. 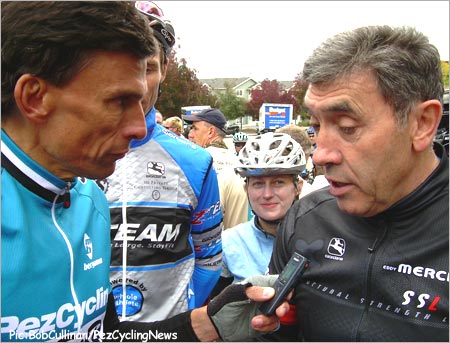 PEZ: I’m sure you get a lot of requests to do events like this. What got you to come here to do this one, and what impression has the school left on you?

EM: A big impression. It’s really impressive to see how all the teachers are patient with the kids. Dan Feshbach (a parent of an Oak Hill student) is a good friend and he asked me to come, and that’s why I’m here.

PEZ: It’s been a tough year for professional cycling with all the doping allegations. What do you think it will take for the sport to come back into the image that it had a couple of years ago?

EM: What can I say about that? I think they’re doing really good testing, but it hasn’t happened. It’s a pity for sports, not just in cycling. But it must be a clean sport. That’s the most important thing. 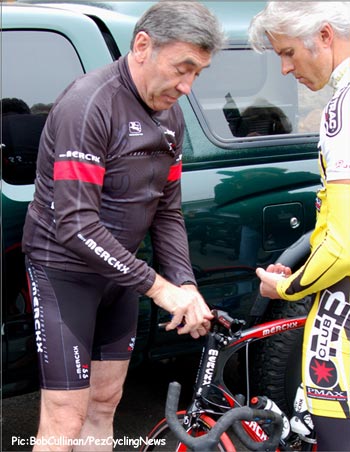 Ever meticulous about his bike adjustments, Eddy Merckx still wrenches his own bike (an all-carbon Eddy Merckx, or course!).

PEZ: As you travel around the world, do you see people concerned about the future of cycling?

EM: Yes, some of them, yes sure they are concerned. But it’s also a problem in society, no? See what happens with so much drug use among kids. I think it’s more important to do sports than to go out and to go dancing, and to the discotheque and things like that. Because you cannot be a great athlete if you dope. It stops very quickly. 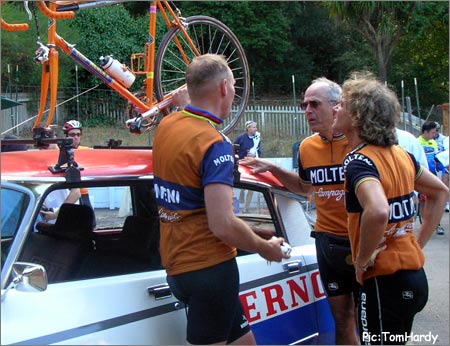 Apparently some of Eddy’s old teammates showed up for the ride. Or maybe they’re just serious fans…

PEZ: You faced your own doping allegations in 1969 in the Giro, and it was very hard on you. They were false allegations. How were you able to come back from those allegations?

EM: You know there is some story that I did it for the money, but I refused it. But then after I go and I do the Tour de France, and every day to testing, and I won the Tour de France with 17 minutes 52 seconds. I think that was the best answer I could give.

PEZ: And you won the green jersey, and the polka dot and the maillot jaune…
EM: …and the team! Everything! 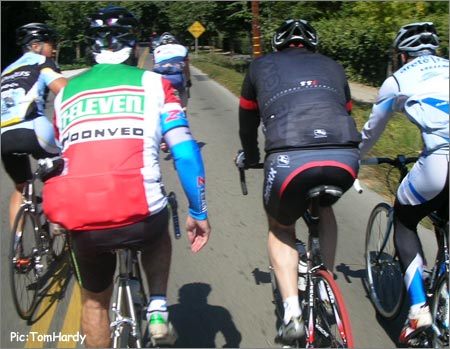 Here’s how Eddy’s rivals remember him – watching his back wheel.

PEZ: Did you talk to Floyd Landis, after his bad day at La Toussuire, and before his great comeback in Morzine? Can you tell us what happened?

EM: I tell him that the finish is in Paris! But I don’t think he took anything, he just happened to be doing what he was doing. I don’t know for sure. For me, it’s a mistake, and I did not experience that, so I can not speak about that.

PEZ: But is it true that you made a bet on Floyd, you made a legal bet with a friend in Belgium?

EM: No, no, that was another guy who did that, not me. 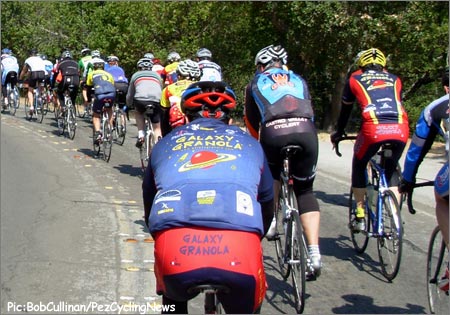 The view from the pack as Eddy leads a long line of cyclists up the hill on a charity ride in Marin County.

PEZ: Your son Axel is going to the T-Mobile team. Is that a good move for him?

EM: Yeah, I think so, yeah. I think T-Mobile is a very good team, very professional, and I’m happy for him that he stayed on a pro team because this year he did a great job in the Tour de France and I hope that this is good for him.

PEZ thanks Eddy for taking time out from a very worthy cause to chat. Note: For the record, Merckx is 61 years old, but “the Cannibal” was not at all charitable on this charity ride. He set a fast pace for the entire route, leaving many of the nearly 200 riders in the dust.