The Tour may be over but it keeps on givin’! – especially when we scored another interview with a gorgeous podium girl that we’re obliged to share with our readers! I had the pleasure to talk with Tour de France podium girl Elodie Pleumeckers in the Village just before the start of stage 18.

Elodie grew up in Bordeaux, France and now lives in Paris pursing her modeling career. To get the Tour de France gig (which is highly sought after by top models) Elodie revealed in our interview that she practiced a lot for the rigorous interviews potential podium girls have to go through. Thank goodness, otherwise the podium presentations at the Tour de France this year would not have been as exciting to watch. 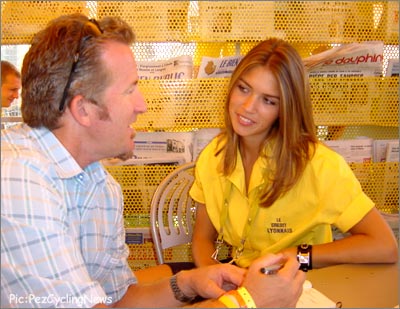 Scott doing his best to remember how to speak.

Elodie was not so confident that her English would be perfect so she employed the assistance of fellow podium girl Helene Delon (which of course I was very happy about) to translate. So there I was with Elodie and Helene all to myself for fifteen glorious minutes.

The lovely Helen served as our interpreter for this interview.

The Interview!
Scott: Is your last name French? (pronounced Plum-e-kiss)

Elodie: No, it is Dutch. I am of Dutch decent but born in France.

Scott: Where do you live?

Elodie: I grew up in Bordeaux but live in Paris now. 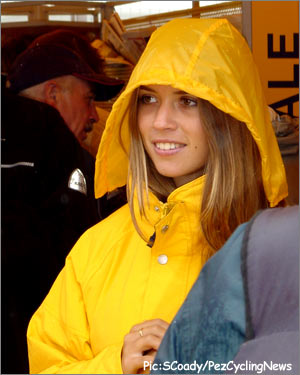 Scott: What is the best part about being a podium girl?

Elodie: Getting to meet so many famous people like Lance Armstrong, Vino, Thomas Voeckler and the many celebrities the come to the Tour de France.

Scott: How did you get this job at the Tour de France?

Elodie: There are many interviews and others who want the job so it is competitive. I practiced many times to prepare for the interviews which helped I think.

Scott: What do you do when not working at the Tour de France?

Elodie: I am a full time model and hostess. I am represented by an agency which sends me to model for magazines and as a hostess for other receptions and sports functions.

Scott: Do you play a sport yourself?

Elodie: I was a gymnast for seven years.

Scott: Really? Which exercises did you do? (this began the most difficult part of the interview trying to translate the following, we eventually had to resort to Elodie drawing little pictures which revealed that she did the pommel horse, floor exercises, uneven bars and the beam.)

Scott: After the Tour is over, what will you do?

Elodie: (with a big smile) I will go on holidays to lay on the beach in Spain and in the south of France.

Scott: What are your dreams for your future?

Scott: Then you love to travel?

Scott: Thank you Elodie and thank you Helene for you help..