It’s the middle of Paris-Nice ’05 and Fred Rodriguez is freezing his butt off in the coldest Spring in Europe anyone can remember. We’re scheduled to talk about his new coffee – Fast Freddie’s Turbo Blend – which has just landed on the PEZ test-bench, but I can’t resist asking about racing in the terrible weather…

PEZ: Fred! You’re in some town in a very cold early-March France – I heard they’re fitting snow plows to the front of your bikes – what the hell is going on with the weather?

Fred: [hahaha] I don’t know if it’s global warming or something but the winters are getting frigid out here – it’s not letting up, it’s been snowing in Girona and I’ve been there training and stuck in snowstorms – . We’re getting to the point where we’re starting to get fed up… The organization has to take care of their business and maximize what they can get out of the riders – but to some point they’re putting our careers at risk – like today – they cancelled 80% of the stage because it was snowing around 700m, but we still had to do one climb and the city was snowed in – so the roads were kinda icy and wet and dangerous to come into… They still want to put on the races because they spend a lot of money doing these events, but the weather is just not coping.

For instance – today was 50 km and it was one of the scariest races I’ve done in a long time- probably because I crashed yesterday so I was really nervous about crashing again. It was amazing we did not crash today – just amazing… with the wet roads and tail wind going 65k an hour in the freezing weather where if you hit the brakes you’re going to slide… 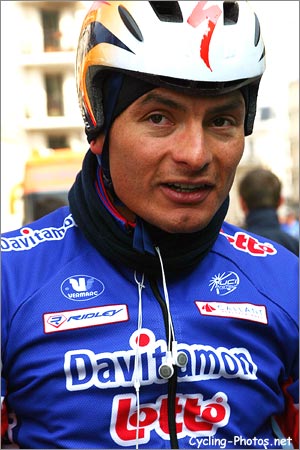 PEZ: Were there any fans there – anyone actually out watching the race?

PEZ: So, if it’s that cold and I’m going out riding… well I wouldn’t be actually, but if I was, I’d have 3-4 layers on, thermal jacket, heavy booties, long gloves, dressed for the Arctic basically – so how many layers are you guys wearing when you’re racing?

Fred: [hahah] Depends on what part of the world you’re from…! I’m from California so yesterday I had 2 sets of booties, 2 sets of leg warmers, 2 sets of armwarmers, windproof cap, gore-tex you name it I had it on! And some of the Belgian guys are just wearing a jersey and a thermal jersey on top of that… my teammates were laughing at me! There was a lot of layering going on…

PEZ: What about this – are you getting anything warm in the water bottles?

Fred: We get a little…tea! Hot tea and that helps out…

PEZ: How is the form coming?

Fred: The form’s been really good – I already won a race in Portugal I did some really good training coming into here, but I had a little injury to my Achilles tendon from riding in the snow … but I’m coming into really good form here…

[suddenly Fred is distracted by commotion in the background…]

Fred: Cadel Evans just walked in – my roommate and he’s talking a bunch of …. Australian…

[I can hear Cadel shouting something in the background]

PEZ: So what races are you looking for now?

Fred: Classics. For me – to go into Milan San Remo and Flanders with top form – those are the two big races I’m gunning for and they’re only a couple weeks away, so that’s what I need to start pumping up for…!

Apparently the luck of PEZ makes it’s way to France as Fred bags a 3rd place in the next day’s stage (it seems we have this effect on riders after we do an interview!).

As for the coffee – stay tuned for a full PEZ-Test as we put it through the paces with our own coffee experts. As for Paris-Nice ’05, Freddy retired on the penultimate 6th stage, obviously thinking of the bigger fish coming this week at San Remo.