Gord Fraser is one of the fastest guys on the NRC circuit – and arguably anywhere – at least that’s what his legs keep saying. Hot off a bunch of recent wins, I caught up with the sprinting ace as he was driving towards Oakland from the almond orchards of Merced, CA through a rainstorm with bud Mike Sayers. Little did I know I’d be conversing to the both of them as Gord excitedly announced his wife Caryn is expecting. 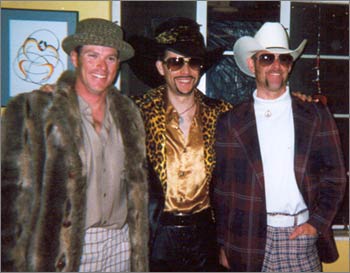 These Team Health Net guys are very hip… (that’s Gord on the left, an undisclosed yet well known mountain ace and Mike Sayers on the right)

EVB- Congratulations over yesterday’s win at McLane’s Merced (CA) crit. You taught [again] about 150 of the best American riders.

GF- Yesterday was great. Today, Horner showed us. What was a bit frustrating though was how all the third division teams were sitting in while we chased hard. Keep in mind the Saturday race counted separately from today’s 20+ miles times five loops.

EVB- What makes Horner so amazing and who are the up and coming North American stars according to you?

GF- He’s so bull-headed. Chris (Horner, Prime Alliance) is amazing and I have the utmost respect for him. As for up and coming guys, hmm… Will Frickshorn’s been plagued by back problems but is awesome, had a breakout ride in San Fran. Tim (Johnson) is good and of course Tom Danielson.

EVB- Gord, what got you into cycling?

GF- I was a cross-country ski racer and used cycling as cross training. Soon I ended up liking cycling better than skiing.

EVB- That sounds familiar, I know what you mean. You were born in Ottawa right? Did you try track?

EVB- You must have worked with Denis Roux (EVB- ex-Toshiba and Z-Peugeot pro rider and Canadian National Coach). What was his involvement in your career?

GF- Yes! In fact, he helped getting me a place on a European Team; ASPTT.

EVB- PCN readers want to know how your legendary experience was with Motorola (arguably now, US Postal).

GF- Not a bad day to start. Rooming with Steve Bauer whom I look up to, we won $US15 000 in a day at Norwest Series, Minneapolis. I encountered a genuine group of good guys I am still fond of; Hincapie, Andreu and just awesome bike racers at large. 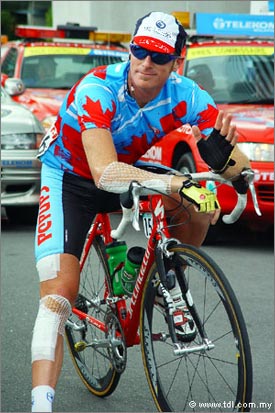 Gord’s good form started at the Tour of Langkawi.

GF- You know. I miss Henk (Vogels, Mercury teammate now with Navigators) for everything he is on/off the bike.

EVB- Speaking of off the bike… Favorite drink?

EVB- We’re both duals (dual citizens – US & Canada) and I love Southwestern landscape while appreciating continental style living in Quebec. What can you tell us about your adobe?

GF- Oh, I’m Canadian through and through and still keep scores on Dan Alfertson… Awesome hockey player eh? But my body got used to the sunshine and general warm, good weather, ha, ha! Caryn and I live in a 1960 double brick, red tile roofed home. 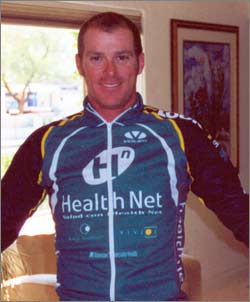 EVB- You can’t talk about the homeland without talking about Beauce (Grand-Prix Cycliste De Beauce). I personally hope to see you there again.

GF- Beauce is great and in fact just phoned the headquarters last week so to get in. Our team could do very well although in our first year. The organization has always, always treated us right (EVB- while Gord was with previous teams). All stages are selective, competitive and we could do without the street sprints… You know, it’s a bit like basketball players just hooping without the game. This said, we’d come to play hard.

EVB- Spoke with a few riders through the off season asking them if they knew where you were gonna end up with this year. There were talks of continuity with Wordin’s program, Mattel, etc. And only recently did you land with Healthnet. How was your winter?

GF- Ah… I definitely knocked on some doors… No one really responding… Kept a low profile.

EVB- Kept your cell turned on…

GF- Exactly. Not knowing was tough. There was talk with Marluux-Charleroi (BEL), and Barlo-World (SO-AFR.) who’s got a strong French program. Then the voice and captain of Team Health Net, Mike Sayers came through and got me a spot.

EVB- Living in Tucson with Caryn, your wife, you were actually considering going abroad again?

GF- We could’ve but it never got to that point although she has just graduated from massage therapy school, we were mobile some. Now Eric, we’re expecting October 5th.

EVB- Favorite piece of equipment, above and beyond past/current sponsorships?

GF- Can’t do without my Speedplays and Reynolds wheels.

EVB- I always noticed how you were the last to use Cinelli Criterium bars and then you told me when you run out of those you like a certain handle bar bend for knee clearance… For sprinting.

GF- Yeah. Of course they (Cinelli) don’t make them no more though I have about 7 pairs left and now I can use bars my sponsors provide I don’t have to mask the brand name.

GF- As close as you can get. Let me tell you about Mike; Mike is the most underrated bike racer in America and the ultimate player. Without him, a lot of my results wouldn’t exist. Just an amazing rider. You wanna talk to him?

GF- Ask him how long he’ll be single for… (He passes the cell phone over.)

MS- Ha, ha! Not very long. Got engaged on Wednesday! (Gord laughing in the background: “Tell him how you met her?”). Well. Gord and his wife introduced me to Nicole for some adult type fun.

EVB- Can I print that?

MS- Yeah, no worries. Turns out she’s a very independent girl, understands bike racing, is a fit, recreational athlete that brought needed things to our lives. We went out and bought a house last August a mile and a half from Gord’s and it made perfect sense we should get married. Last year was just a big flip/flop year; bought a house, new team…

EVB- You guys are about my age?

MS- Yeah, Gord is 35 (Gord yells 34) and am 33. Back in the fall I connected with current Team manager, Kevin Kline, an ex-pro who wanted to put something together. Turns out I wanted the same as Mercury without the management (Gord laughing hysterically in the background). At the eleventh hour on December 30th (2002), spent an hour on the phone with Greg Raifman, CEO of Momentum Sports Group with Health Net as title sponsor, one of the nation’s largest publicly traded managed health care companies. I was ready to retire the following Monday if nothing came about and finally told Kevin; Get me through 2003. We’ll make our mark. To do that, get Gord or I’m willing to pull out.

MS- Exactly. Either we all go down in a bowl of flames or we take our chances. You know, when I was on Mercury, I did a lot of observing much like what I did when downhill ski racing.

EVB- How did you emphatically position yourself into captaincy?

EVB- Where are you driving to exactly?

MS- To Greg’s (Raifman). We call him “Team Boss” and he can host multiple riders in his huge house near Oakland, where we race on Thursday. As Gord mentioned, we hope to end up at what I call the single hardest race in North America, the Grand-Prix Cycliste De Beauce. You could be done for the rest of the year it’s so hard or you could be a horse.

EVB- Do you think the event would gain in spectatorship while uplifting team exposure and spirits if it added a stage or two in the Capital? I’m reckoning the DuPont days where it had a corporate approach exceeding the regional aspect.

MS- You’re on the right path for sure. No doubt. I’ve been there what, four or five times and the organization is great! Quebec’s gotta be my favorite city in North America!

Thanks you guys and safe travels!