I talked on the phone with George last Friday night, just back from the Spring Classics. I got his take on the past two weeks at the Tour of Flanders, Ghent-Wevelgem, and playin’ his cards at his favorite Classic – Paris-Roubaix… 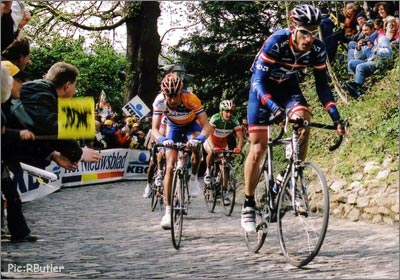 George leads Boogerd up the Muur in Flanders.

George looked strong all week, always at the front, but the big victory eluded him again. Regardless, he’s happy that he played the cards his way at Roubaix, and came home with gold from de Panne, and is ready to race this week’s Tour de Georgia, which he’s looking forward to, especially racing with “his team back in America”.

PEZ: So how are ya doin – how are you feelin? Did you see me over there in Belgium? (laughing…) 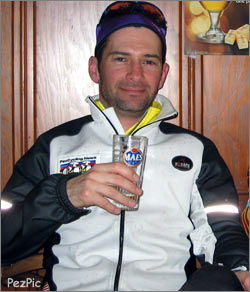 The Hincapie Sportswear jacket (emblazoned with PEZ-logo) was a huge hit – I was talking to Antonio Cruz on the start line of Flanders, and he said “ Hey – cool jacket – you gotta show that to George!”

Okay – enough about me, let’s talk about you…

AT FLANDERS
PEZ: We saw you at the front a lot, and you looked like you were in great shape through the whole week, how were you feeling?

George: I didn’t feel super-good throughout the week, but I raced okay, and got that win in De Panne, which was nice, but Flanders, the race was so hard from the beginning that the tactics at the end went a little strange… and everybody was so tired – all the favorites were really worn out, and with the breakaway being so big, we had to make a lot of efforts before we normally would in the race. 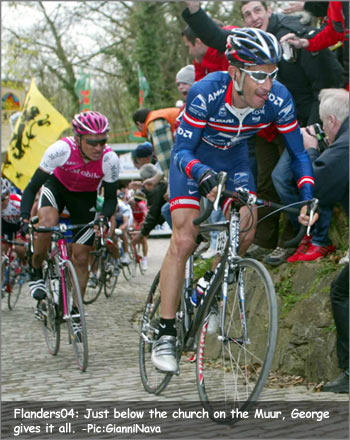 Wesemann made his move right at the top, on the last really steep pitch just before the church.

PEZ: I watched you come by at the front of the group on the Muur (about 20km from the finish), and you looked really strong at that point

George: Yeah, I’d just bridged up to the breakaway, and when I got to the Muur, I just couldn’t follow Wesemann. It was as simple as that. He came behind me and also bridged up, and he was on a super day, and he was really the only one that did that.

PEZ: When you guys went over the top, were you just blown at that point?

George: Yeah, everybody was blown. The three guys went and I was just behind them, and they got about 25 meters, and Bettini, Boogerd, everybody (else) was right behind me – and nobody could go by. You know, those guys had just that little bit more on the climb, and that was the difference right there.

PEZ: So when you guys got over the Muur, it’s more or less a gradual decent for about 5-7 km down to the Bosberg – the pace must have been pretty intense in the chase?

George: No, we just stopped. That’s where they got the gap. Three guys rolled away on the decent, and 3-4 guys let them go, and then we just kind of sat there looking at each other

PEZ: The Bosberg is the final climb before the 10km run to the finish. It didn’t seem super steep when I rode it the day before, but how tough is it at that point in the race?

George: It’s tough, after 160 miles… Flanders was actually 20 km longer this year ‘cuz they made a mistake, so it was a super long race, super windy from the beginning and by the time we get to the Bosberg, the legs are just done. And it’s actually not an easy climb anyway… 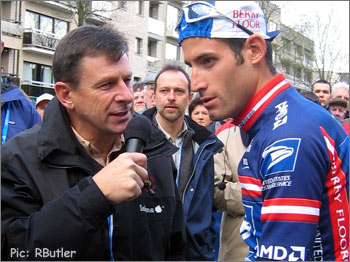 Paul asks the tough questions before the start at Gent.

GHENT-WEVELGEM
PEZ: The major obstacle in Ghent-Wevelgem is the climb over the Kemmelberg, which is done twice in the race. We rode it the day before, it was raining, and those cobbles are super-slippery – there was no way I was riding down that descent… it was pretty scary. In the race it was raining even harder, what’s it like for you guys going down that thing?

George: Yeah the Kemmel descent is super-dangerous. This time we actually rode pretty sensibly down it and pretty much had the brakes on the whole time… Oh yeah, it’s scary for us in the rain… 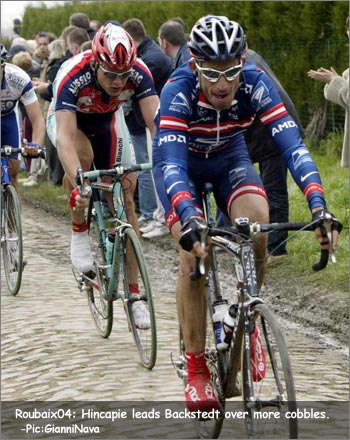 PARIS-ROUBAIX
PEZ: At Roubaix, we were watching you guys come through the Arenberg Forest, and I saw you in the front – maybe top 20 at that point – but the race was pretty stretched out – had it broken up before you got to Arenberg?

PEZ: Compared to the other sectors of cobbles, how do you rate the Aremberg Forest?

George: It’s up there, but it’s not the toughest by any means… there are 5 or 6 sectors before the end that are way worse than Arenberg. The one right after it is way worse (it’s 3700 meters that goes on forever – ed.)

PEZ: You were looking pretty comfortable when you went through, how were you feeling?

PEZ: Roubaix – is it a battle of attrition, where you just try and conserve your energy and wait for the other guys to fall back, or do you need to make tactical efforts in specific places?

George: A little bit of both… the Arenberg, you definitely want to start in the first 5-10, it’s so slippery, and it’s kind of a downhill coming into it, so there you probably spend more energy to stay in the front… It’s vital to be at the front, so you gotta make the right move and be up there.

PEZ: And once you get through there – are you looking to recover a bit, or do you put the hammer down?

George: There are still some sections some sections that you know are bad, and even if it’s a group of just 30-40 guys, you still want to be near the front of that. Some sections you know aren’t as bad so you can go back a little bit.. but basically, after the Arenberg, you never want to be less than top 10 in the rest of the sections.

PEZ: What gearing are you pedalling through there? 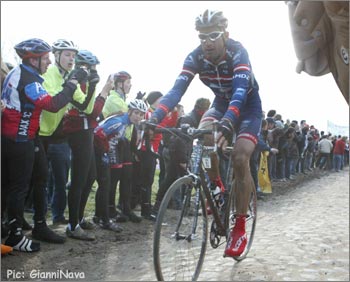 PEZ: After riding section of the pave myself, and then watching you guys race it, I was pretty blown away by how fast you’re going. To me that stuff was brutally hard, but then I’m no pro – how hard is riding the pave for you guys?

George: Oh, you’re definitely worn out.. after Roubaix you feel like you just did the Tour de France, your body just gets bounced around, it’s really really brutal. It just really destroys you for… several days…

PEZ: When did you get on your bike after Roubaix?

George: I took 2 days off, and flew back to America – then rode on Wednesday.

PEZ: What did you think of Backstedt’s win?

George: Well, I thought it was great. It gives hope for riders like me who keep trying to win it but I can’t win it…

PEZ: But you’re always in there…

George: I know, but it’s different than winning. I was disappointed with my results, but I took a gamble with Juan Antonio Flecha, and we had 20 seconds, and we just gave everything we had… In the past I’ve gotten a better result in Roubaix, but I just followed the leaders and got to the finish with them, not making my name with attacks, whereas here, I made an attack and took a big risk, and I can look back and be happy with the fact that I took the risk, and got a good gap… it looked like a good move – that I thought would work – and I put everything I had into it. If I would have followed and then got a 4th or 5th,…well I prefer what I did.

PEZ: Next up, you’re heading to Georgia, how are you feeling about racing back in the States?

George: Oh, it’s gonna be nice – It’s going to be fun racing with my team in America, and also with a lot of guys that I don’t get to race with… one guy in particular that I train with in Greenville all the time is this 19 year old kid – Craig Lewis – he races for TIAA-Creft – and he’s really good so it’s gonna be fun to race with him.

PEZ: Thanks again George – have a great race in Georgia and we’ll look for you on the podium!

Check out the full PEZ BELGIAN Experience in our FEATURES Section.