I got the call with about one day notice to interview Liberty Seguros’ Igor Gonzalez de Galdeano. He was racing the Vuelta a Castilla Leуn, so I was a bit nervous about just ringing up a 10 year pro who’s worn the Tour’s Yellow Jersey for a chat…

Such are the perils of being a member of the PezCycling News Euro-bureau, so I gave him a ring on a Thursday evening after the team time trial stage. It turns out he was a pleasure to talk to, and genuine guy, somewhat reserved (but who wouldn’t be in their first interview with a reporter they didn’t know?), but with a subtle yet obvious passion for bike racing… 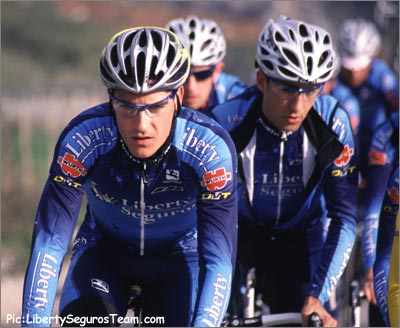 The Season So Far…
NATHAN: How do you feel after today’s stage?

IGOR: I’m feeling pretty good, although tired as usual after racing. Illes Balears won today. They have strong team and we had some bad luck.

NATHAN: I saw you’re in 3rd overall after today, do you fancy a chance at the overall?

IGOR: No that would be tough to do. My objectives are still a ways off, the Tour and the Olympics. This race is mainly to help me find my form and I seem to be coming along compared to earlier races this year, but there are other riders who are better form right now.

NATHAN: You haven’t raced much yet this year have you?

IGOR: Well, actually I have more days of racing in this year than last year. Something like 30 days of racing now. Since I had some injuries last year I had more desire to get back into things this year.

NATHAN: Seeing as how you just rode a TTT today, do you thing Liberty will continue to be a dominant force in the TTT’s as ONCE was before?

IGOR: Well, in the past we had some really good riders like Jaksche and Azevedo. Luckily we’ve filled those gaps pretty well with riders like Vandevelde and Baranowski. I think the team continues to be strong and should be a candidate to win the TTT this year.

NATHAN: Christian Van de Velde joined your team this year, how is the American doing in the predominately Spanish team?

IGOR: Good. I think it helps that the Spanish are a very open people and he seems to be doing very well with us. 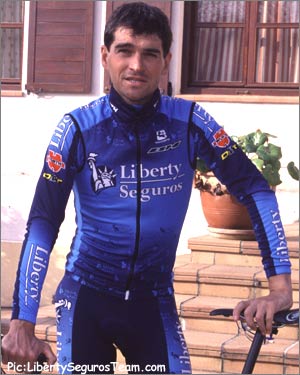 The Season Ahead
NATHAN: What was it like to wear the Yellow Jersey in the 2002 Tour?

IGOR: It was the best feeling a professional cyclist can have. It’s everyone’s dream, and a dream I’d like to repeat.

NATHAN: So you think it’s possible to get the jersey again this year?

IGOR: Yes, between the prologue, the ITT or the TTT it should be possible.

NATHAN: This year’s objectives are the Tour and the Olympics as you mentioned, but what about the Vuelta?

IGOR: Yes, the Vuelta too, but the most important are the Tour and the Olympics. After that then we’ll start to think about the Vuelta.

NATHAN: In this year’s Tour will you be able to ride for yourself or will you be dedicated to riding for Heras?

IGOR: Roberto, based on his palmeras will be the team leader. In the Tour however there are stages that favor my abilities more such as the time trials and the prologue. I have to be in top form for those days because they suit me better and when we reach the mountains, as long as Roberto is going well, we’ll work for him. From the outset though it’s clear that Roberto is the leader.

NATHAN: How did you feel about Beloki leaving and Heras stepping in to fill his shoes? Did you feel like maybe you missed a chance to move into the leader role?

IGOR: Disillusioned, no. Roberto is a solid candidate for the Tour. My relationship with Beloki though was different. We’re from the same town and we rode together since we were very young. So with Roberto it’s a little different but still a good relationship as he is a proven leader.

NATHAN: Speaking of growing up with Beloki, where are you from? I’m assuming then that you’re Basque, but from what part, and how exactly did you get started in cycling?

IGOR: I’m from the city of Vitoria, and I got into cycling thanks to my brother Alvaro. He’s four years older than I, and he started cycling and I followed him.

NATHAN: Does having your brother in the team give you any advantages?

IGOR: Yes, being that he’s my older brother I’ve learned from his experience. We’ve also been able to share many important experiences racing together. We’re training partners and even though you have certain relationships in a team there’s nothing like the relationship you have with a brother. He’s my confidant and we’re always there for each other. 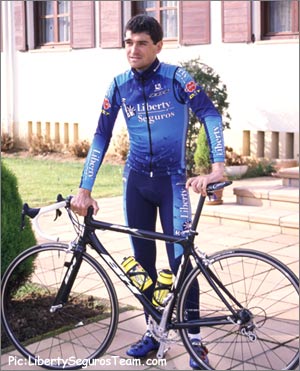 What Do You Say About Siaz?
NATHAN: You’ve raced for Euskaditel, Vitalicio, ONCE and now Liberty. What does Manolo Sбiz have that sets him apart from other directors?

IGOR: He works very hard to make sure the team is exactly that, a team. He tries to separate the individualities and make sure the team works well together. He works hard to see that we have a good team relationship so that he can get 100% out of each of us in order to achieve one objective. He’s very demanding be he has a lot of confidence in us.

NATHAN: So do you ever get tired of Manolo yelling “VENGA, VENGA, VENGA!” ?

IGOR: No, if he’s yelling and routing us on, it’s because we’re going well and there are possibilities to win.

NATHAN: It’s funny because in the U.S. for the Tour and the Vuelta we hear our TV commentators but you can hear the audio feed of the race too and most Americans don’t understand what he’s saying and many think he’s a lunatic.

IGOR: Well, I heard once that in Germany some spectators thought that “Venga” and “Allez” were names of riders. (For the non-Spanish speaking population, “venga” translates loosely to “come on”)

On To The Vuelta
NATHAN: In the Vuelta, do you thing the Angliru is good for the race or is it too much?

IGOR: I think it’s too much. I think that there are plenty of climbs in Spain that give just as much spectacle as the Angliru without over doing it.

NATHAN: Being that Heras will be the leader for the Tour, who will lead the team in the Vuelta?

IGOR: Heras will also lead the team for the Vuelta, especially since he won it last year.

NATHAN: Do you foresee any problems traveling to France this year, and how will you make sure you don’t have repeat of two years ago?

IGOR: I doubt it. My situation hasn’t changed and the UCI continues to allow a certain level while France recognizes a different one. The team has fought about this in the past and will continue if necessary.

NATHAN: Ok, one more question and let you go recovery for tomorrow’s stage. How do you like to spend your free time?

IGOR: Now that I have a daughter, I like to be at home with my wife and my daughter. It’s hard to get me out of the house now.

Well, there you have it. Igor seems to be a very down to earth pro who knows exactly what he’s set out to do and how to achieve it. Being that he was the last Spaniard to wear the Yellow Jersey, I think most of Spain would be delighted to see him repeat this feat. Thanks Igor for taking the time for us to get to know you a little better. I hope this summer goes according to your plans and that you and the Liberty Seguros team achieve what you set out to do.

Check out the Liberty Seguros Team website at www.LibertySegurosTeam.com and tell ‘em PEZ sent ya!

Bloke In France: The International Invasion