Another in the growing crop of North American pros budding to take on the Euros, Dom hails from Quebec, Canada, and rides for a team based in both Australia and Belgium. Eric Van Bockern recently talked with Dom as he recoverd from the Tour de Georgia and looked ahead to the GP de Beauce… 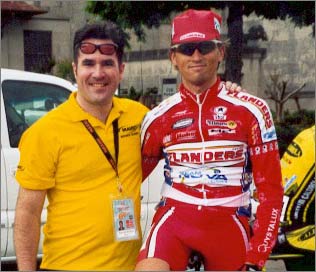 Dom and Eric at the Tour de Georgia.

Although he’s from a few kilometers South of Montreal and consequently my 200 K neighbor, I enthusiastically discovered Dominique through his chronicle with local rag Velo-Mag and an article or two in globally distributed Cyclisme International, thanks to my now expansive library. I first noticed how well read he was and then thought his contributions might’ve been slightly edited. Was I wrong! We met last week at the Grand Prix Cycliste de Beauce Postes Canada press conference and started to chat about his ambitions. Enter the life of one of our own, Iteam/Nova-Flanders’ French Canadian Dominique Perras.

EVB- Am I off or not too many Quebecois adjusted well to the Old Continent’s style racing and living?

DP- We can’t forget Jean-Francois Laroche finished 11th at the Espoirs World Championships, although in the pack on a flat course and I believe is evolving in a farm team in France at the moment. He’s 23 and I have a feeling he might express himself best within the next 3-4 years.

EVB- Who is in your eyes, the greatest pro you encountered in the European peloton?

DP- Bruno Boscardin for his astuteness, wisdom and Rolf Jarmann who was on Post Swiss Team with me.

EVB- What do you notice different with the “mediatised” pack leaders like Armstrong, Ullrich?

DP- I don’t have any personal contact with them but they always seem calm, wise and why shouldn’t they? You look at Pantani even today, nothing might go on in a given race and he’s always surrounded by a minimum of seven teammates like bodyguards. They have poise.

EVB- What’s the best tip you’ve ever received from a coach or better yet, a mentor of sorts?

DP- Hmm, good question! [pause] That a pro rider, any rider, is better judged on 3-4 good days a season than 20 bad ones. This said, that it’s paramount to always try something from the front (attacking) and repeat it for almost as many days you’re racing. 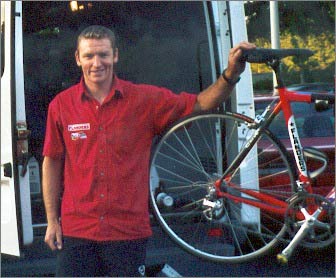 DP- He’s well organized, speaks 3 languages fluently which is an eminent communication asset within our team; French, English and Flemish and is an ex-racer.

EVB- VanHaesbroucke raced for Navigators prior to retiring…

EVB- The first year Tour de Georgia Vs Grand Prix Cycliste de Beauce Postes Canada which you’ve participated in from before you were a Junior, the two 2.3 sanctioned events on this continent?

DP- Georgia was very well executed and instead of the traditional A to B stages, organizers added a lot of finishing circuits ending several stages like a crit. Beauce is tons more selective in its 18th year.

EVB- Before landing on Iteam/Nova and now Iteam/Nova- Flanders, how was your progression, plus can you indulge us in the team structure which appears to be a mutual fund, more or less?

DP- In 1998 I was with your old adversaries, Espoirs de Laval from the Montreal area (NDLR: Best team work I’ve witnessed considering they’re amateurs), a stint with Nutra-Fig in ’99, Phonak and eventually, a deal with Noble-House was in the making but I suppose we don’t need to reiterate what happened there. On my current team’s Aussie side, Jayco (a rv manufacturer) is an equitable partner. Members from all over can subscribe through our website as team partners for about 200 Australian dollars and get cool shwag, much of it based on a proven Australian Football team structure. 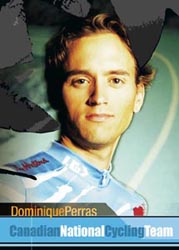 EVB- Can you describe your apartment in Gent, Belgium?

DP- Nothing major other than the coveted proximity to all local attractions and amenities. You enter the main area and soon walk up a staircase to the loft type bedroom area. It’s studio size. Just bought a ‘92 Opel Cadet car to get around places I don’t need a flight to get to. It’s also close to all the mythical pave areas with numerous “bergs” around.

EVB- My Canadian girlfriend wants to know what is the ideal woman for a globetrotter such as yourself and the compromises she’d have to put with, as well as your biggest dream if it hasn’t been accomplished yet?

DP- Laughs… At 29 years of age, my passion remains to surpass my limits, physically and mentally. I have a bachelor’s degree from Laval University in your hometown of course and even studied at UConn near Hartford and would eventually like to pursue a doctorate in International Affairs with every intention to end up in our Province. In the interim, an independent woman willing to live/work in Europe for a bit but follow me back home would be ideal. I found emotional co-dependence to be detrimental to my relationships. As you and I discussed, it’s true the team has many riders with a steady family life but Iteam/Nova was a bit more “regionalised” prior to associating with Flanders. Now we’re covering the globe hence my aforementioned couplehood wishes.

EVB- We’ve all read how much inspiration Armstrong has gotten from his single mom. After discussing briefly on the phone with your enchanting mother, she seems so proud to spend time with her son like when she saw you race and stayed with you in Belgium for a couple of weeks last year. Do you draw much energy from your immediate family?

DP- Yeah, well, I always make a point to see my sister and brother and their respective children while staying with mom when I “layover” like now between the Peace Race and Philly. It’s never been an issue for me to pack up and go. We stay in touch constantly and get past melancholy I think.

EVB- Your most touching moment on a bike?

DP- Another good one. Let me think… When Macca hit a truck while training in Melbourne. The Trans-Canada race where I finished 10th in front of my home crowd in ’99. The atmosphere was intense up Mont-Royal (part of the 1974 World Championships where Merckx won). Jean-Cyrille Robin (who was once on Lance’s team) won. The 2000 Mundial in Plouay was also notable in my palmares.

EVB- Belgians have gotten some unwanted publicity concerning the Pot Belge, their love for beer, etc.?

DP- Just like the society at large. I feel racers are calmer than a lot of acquaintances in my age group living it up. More illicit substances are entering societal groups so are probably more available but I’ve never witness consumption with fellow riders. I suppose if they were to do it, they’d be most discreet. Cycling has more controls than any other sports. If anything, Australians have a love for alcohol, I should know!

EVB- For me and possibly since my humble cycling career was cut shorter than yours, Cycling remains the most prestigious professional sport. The average American wonders why a Quebecois in his right mind would depart the home comfort and expose himself to the sometimes ungratefulness of the sport, suffering and find sanctuary in the land of cobblestones and echelons. What might be the expected salary bracket for a rider of your caliber and golly, how much good genes to you need to keep the morale up while being far away?

DP- Health is everything and we can take care of ourselves as best as conceivably possible within the means of the UCI, which leaves us fewer options than the average Joe. I’ve had my share of illnesses but so has many other riders. I make what an average Quebec citizen makes. By the time I turned 21, I made a conscious decision I wouldn’t race exclusively for financial reasons. When and where I chose to train in the off season is my responsibility, financially and decision wise. Met with Charles [Dionne] in Ventura, CA last winter. For him to do what I do for example, he’d have to accept a pay cut so to exploit his sprinters’ abilities in Europe instead of the States.

EVB- You go and train in Ventura before and after Christmas then.

EVB- At 5’10”, 138 lbs, when do you peak and what are your aspirations as you’re leaving for Philly today? We’d also like to know your favored bike fit.

DP- Depends on my preparation. As you saw in Georgia, I do okay in the mid-mountains better than the cols. Generally, I’ve ridden a 54c X 56c frame and have done exceptionally well as late as September, October. If the Wachovia US Pro Championships splits in a group of say, 10, I might be there in the break. Unlikely I’ll place in a sprint situation. Watch for Macca and Allan Iacune also. Beauce is very important as up to 30% of our UCI points could be gained for our Hamilton World’s Canadian team selection, another important venue in practically my backyard.

We’d like to thank Dominique for enlightening us on life as a very respectable pro in Europe. His eloquence and ability to roll with the punches promise to make him a professional to reckon with in any other field. He’s one of the few who doesn’t use an agent other than the occasional counsel of a good friend. His accessibility being elevated. Best to you Dom!