I’m speaking with John Lieswyn as he heads from Ames, Iowa, to Arkansas for the Mercy Celebrity Classic, which sounds more like a golf match than a bike race. It’s a good thing he’s not in his beloved ’66 Mercedes roadster, I’d never be able to hear him above the din as we chat about all things cycling: the old guys, the new kids, what’s in store for John, Ragbrai, doping, and even Van Halen. Yes, Van Halen. 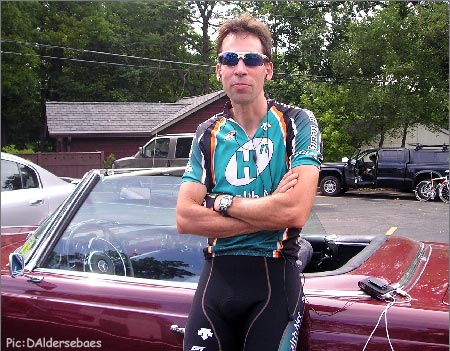 John and his now famous Mercedes at the USPRO Criterium Championships in Downer’s Grove, Illinois, August of 04.

John grew up in Indonesia, where his father had been transferred for business. After returning to the USA in ‘84, he finished high school and university in Gainesville Florida where he began cycling (along with Dave McCook and Hugh Moran, both still racing!) and was married in 1990. Like most bike racers he thought he needed to live in Boulder to climb the ladder, so he brought his wife there and then hit the road with the USA National team.

He was gone for months at a time in Europe, and the relationship fizzled quickly. After that breakup and a return to Gainesville, he met an old cycling friend’s sister, Dawn. She was fortuitously finishing vet school in North Carolina. Dawn and John settled in Asheville NC where she worked in general practice, and
they were married in 1995 after his final season with the National team.

After racing as an amateur in the early 90’s in Europe and having missed a berth on the Olympic team in ’92, John got his first pro contracts for ’93 and ’94 racing for Coors Light. Before Coors Light came along, John had raced for teams like teams like Crest, Spago, and Saturn. 1994 saw John suffer a compression fracture in his vertebrae incurred at the Athens Twilight criterium, and was left without a pro contract for ’95.

Riding under Roy Knickman in ’95 as an amateur again, he “had a lot of fun, as we got to ride against pros most of the season. I did real well over in Europe, in races no one knows about here. I raced the Regio Tour, Tour of Poitou Charentes, Niedersachsen, Peace Race, Tour of Poland, Settimana Bergamasca, super tough races, but not really recognized by domestic managers or the media. They only recognize the Grand Tours, the Classics. You say Regio Tour, people go “what?” but its been going on for 90 years”.

A near miss (or perhaps miscommunication) with the newly formed US Postal team, John was again without a team. A little disgusted with it all, he hung it up for a year only to return stronger and more motivated. John’s been a fixture in the US peloton ever since. It’s hard to mistake “that face” out there on the front, hammering. 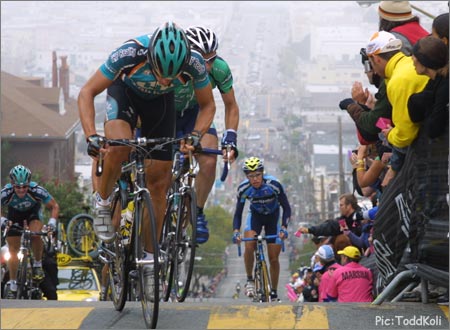 John and the Health Net team were major “protagonisti” at the T-Mobile International in San Fran this year..

PEZ: How much longer will you be terrorizing the US peloton?
JL: I’m still really enjoying the sport right now, and it makes a lot of sense for me to continue another year. I’m not going to predict after that, but obviously it’s getting to be the time to think of other things. But I really do enjoy competing against guys that are now almost half my age! (John is 36, and is signed on with HealthNet presented by Maxxis for ’05)

PEZ: Talk a little about the team this year. You had some guys that made a huge impact this year like Tyler Farrar and Jason McCartney, for instance.
JL: Obviously Tyler Farrar is a fantastic talent, and is a bonafide young guy to watch. Jason is not exactly a young guy but he is a quite a powerful rider. For about 6 weeks a year, there’s no one as strong as he is. I think undoubtedly we’re the best team, no doubt about it. We’re way ahead in the NRC points, without even doing all the NRC races. Jeff (Corbett, DS of HealthNet) is sort of selective. He kept us out of races like Captech and a number of end-of-season races.

PEZ: Do you think the team was overlooked this year?
JL: No, other teams and the media expected a lot out of us because of the people we signed up over the winter. (ed: and look at the names! Pate, Sayers, Jones, McCartney, Farrar, Lieswyn!) The only way I’d say we were overlooked were races like Philadelphia and SF, we made those races happen. We dominated from start to finish and very nearly won both of them, but it’s sort of like in horseshoes, “almost doesn’t count”. But we showed in both of those races that we were the strongest team. And in SF, Mike Sayers and I dragged that 13-man break around the course for 80 miles; two riders did all of that. With a few things different, then it’s quite possible we would have won that race. But it all went basically ignored in the race reports. 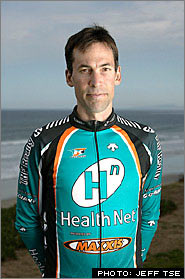 PEZ: Verona?
JL: I’m not going, but it really fires me up for next year to make the team again. If it is my last year next year, I’m going to try for the automatic selection by finishing #1 in NRC. And wherever the World Championships are held, I want to be the guy that’s there to help out at the end of the race, not just the first 100k stuff.

PEZ: What’s your reaction to all the latest doping news?
JL: Well, in the fight against doping, the argument could be made to shorten the races a little. And cycling historians will tell you that the races in the ‘20’s were even longer, but they were not being raced at the same high physiological output that is done today. As for testing, the test needs to be 100% reliable testing. No dissent. No major scientist saying, “Hey, there’s a way to get a false positive.” Some will say every guy that tests positive says he didn’t do it, but that’s not true. Oscar Camenzind said “yes, I did it, and I’m done”. There’s a number of riders who have tested positive and admitted to it, so when someone tests positive and they say “I’m innocent”, then they deserve the benefit of the doubt. It’s too bad the onus is on the accused to prove one’s innocence. Here in the U.S. I’m all for more testing, and having only partial menu urine tests is not enough. I understand the reason why – it’s expensive. Right now, there’s too much possibility of a false positive, but there’s still too much doubt when someone rides well. If we all had to pay a little more to finance better testing, then fine, higher license fees, whatever.

PEZ: What’s next for you after you hang up your wheels?
It’s in my blood. I don’t think I’ll earn the majority of my income from cycling, but I’d like to do coaching clinics, to pass on the hard earned tactical knowledge. Brice Jones (also on HN) and I are starting a business called Complete Cyclist Coaching, and I think it’s a great fit. Brice is meticulous about the methodology and I’ve got 8 years experience, so we both bring a lot to the table. We both have big plans for it, but I’d also like to promote a race, maybe do some announcing occasionally. 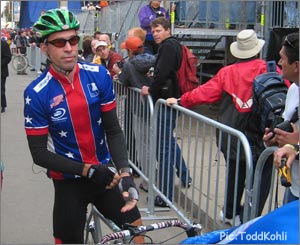 PEZ: Ever going to do Ragbrai?
JL: It’s possible, there are a lot of other tours Dawn and I may do, some tandem stuff in some exotic locations perhaps, and yeah, maybe Ragbrai. We’ll see. (ed: Ragbrai is the state tour if Iowa – check out our report from 2004 here.)

Q: Racing in the States or in Europe?
A: Racing in the States! John adds: sure Europe is the majors but with all the doubt about drugs in cycling I do think American racing is more real. I also want to point out that many, many people seem to think that all we do are crits here. That’s absolutely not true. I did 30 USA races over 100 miles in 2004, not including those I did in Brazil, Tobago, Malaysia, and New Zealand. In 2003 I did a lot more stage races so I racked up nearly 40 road races over 100 miles.

Q: Plaid or Corduroy?
A: Corduroy.

Q: What’s on your pizza?
A: Gourmet

Q: Hawks or Cyclones? (Iowa’s two universities teams and big rivals, IA State is in Ames)
A: Not a fan!

Q: Pink Floyd or The Rolling Stones?
A: Floyd.

Q: Van Halen, with David Lee Roth or with Sammy Hagar?
A: Let’s see, I have to involve the significant other because she’s a fan (I hear him consulting his wife) and the verdict comes back “With Sammy”

Many thanks to John for his time and insight, and we at PEZ wish him all the best in the twilight of his storied career!

Inter-Bikes… Getting Framed in Vegas