Manuel Quinziato is in his 2nd year as pro rider, with the Italian Team Lampre. He was born in the same area of Gilberto Simoni and Francesco Moser, Trentino-Alto Adige, and he even has similar characteristics to Francesco Moser: he’s a strong time trial cyclist. As Team Lampre isn’t riding the Tour de France this year, Manuel had some time to talk with PezCycling News…

Until now he have been running Giro d’Italia, his first Grand Tour. At the Italian national time trial championship he arrived 2nd, behind Mondini (Domina Vacanze – Elitron), and he has been dreaming also of the national road race: he was ahead until the last 300 metres. As he said after the road race “I’m still very young, and I will have many other chances”. That’s for sure. 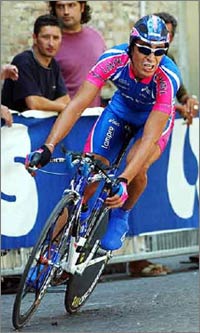 PezCyclingNews: What was it like turning pro? What have been the biggest difficulties?

Quinziato: To turn pro it has been a dream that came reality! The biggest problems have been the longer distance of the races, and the inexperience that makes you spend more energy.

Pez: This is your 2nd year as pro rider, what is it your main objective for this season? And what kind of preparation did you do?

Q: I was wishing to take part in the Classics of North and Giro d’Italia, and they gave me the chances to do it, and I’m really happy for it. I finished the Giro, and it’s already a good result by my opinion. For the Giro, I trained especially on climbing. For the Classics, on flat and short hills.

Pez: Last year you arrived 3rd at Tour du Belgium: do you want to be a Northern Classics of Grand Tour rider?

Q: I like a lot the North Classics, they’re true races, you fight from the first km until the last one. I prefer these kind of races.

Pez: How was your experience in Zolder? In the World Championship you did a very good 18th place. What do you think of your performance?

Q: To take part at the World Championship at my first season as pro, it has been wonderful! Beside my place, I’ve been glad for the time, because I didn’t lose so much time, and I can still improve. 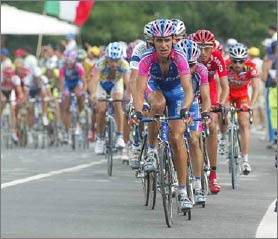 Pez: What kind of rider do you want to be? Do you think you’ll be able to fight in harder races with long hills?

Q: I’m good on flat, and on short hills. For the long hills, perhaps I should lose some kgs, and work for improve it. Perhaps in future I will do it.

Pez: How did you get started in bicycle racing? And what motivated you to become a professional bike racer?

Q: I started with BMX, and nobody in my family had passion for cycling. It’s sheer chance! I like cycling because you can do it only if you have passion and the sacrifices repay you.

Pez: What do you learn as a professional racer that is valuable in other areas of your life?

Q: I learned to stay tough and when I have an objective, I follow it with tenacity.

Pez: If you were not a racer, what do you think you would be doing?

Q: I’m studying law at the University of Trento. Perhaps I’ll be a lawyer. 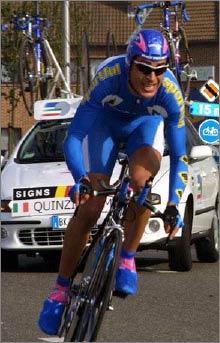 Pez: Inside team Lampre there are many young rider: Bertoglati, Loddo, Pagliarini, Ratti e Righi. What do you think about your team of this year?

Q: Lampre is a good place for young riders, they make you grow without any pressure and with serenity.

Pez: How did you live inside Lampre the “Rumsas case”?

Q: There has been a lot of confusion about it. And the team it has been accused unjustly.

Pez: Do you have any favourite rider of the present of past?

Q: I always watched with admiration Lance Armstrong, since 1995 when he won at Tour and he pointed to the sky in the memory of Fabio Casartelli. And then his power and the determination that he got when he was sick. 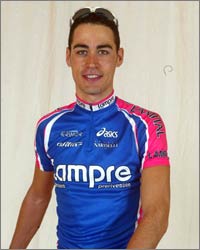 Pez: Have you ever been to North America?

Q: No, never! But I hope to come there in October, in Hamilton!

Pez: What advice would you give to a young rider looking to be successful in the pro peloton?

Q: He must always have fun, especially when he is young. But also when he turn pro. Because passion and professionalism are the right key for a good rider.

Pez: How the group was feeling after the death of Kivilev? Do you use ever the helmet?

Q: When Kivilev died, the day after all the peloton was using the helmet…the sad thing is that the next day, it was as before: half group was without helmet. Many riders used to say that it’s fatality, but I don’t believe at it! I always used the helmet, even before the obligation, we risk very much and I didn’t know how it was possible that many cyclist didn’t use it.

Pez: Do you have a personal website that our readers could visit?

Thanks for talking to us Manuel!