If you were asked to name a former Aussie pro road champ riding for Lotto-Domo you’d probably say super sprinter, Robbie McEwen, but there’s another Aussie who’s been riding with Lotto-Domo for the last 2 years, top domestique, Nick Gates. After chasing Nick around the Gold Coast on a training ride, he slowed up long enough for us to chat about life in Div 1, being a top domestique & his thoughts on the upcoming season.

Nick Gates turned pro in 1996, and promptly won the Australian road title. He’s just completed 2 years in the big leagues after a few years riding in Div 2 teams in Germany, and has cemented himself as an integral part of the Lotto-Domo operation. Nick has signed a contract for the next two years with Lotto Domo’s new incarnation of Davitamon-Lotto where he’ll ride alongside 3 other Australians in 2005, Robbie McEwen, Henk Vogels & Cadel Evans. 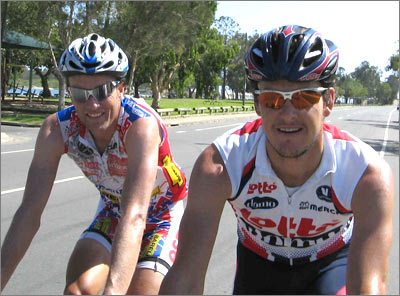 Nick Gates and his mate Jason Phillips training on the Gold Coast.

Pez: What’s it been like these last two years with Lotto-Domo? How big a step up has it been from your days on the smaller teams in Germany?

NG: Oh yeah, absolutely. It’s more like a job now & so hard. Every race you ride is a big race & you’ve got a job to do & you’ve got to do it. You’ve got to be at a good level all the time, so there is a bit of pressure.

NG: I don’t really know much about it to be honest, just how many teams are in it. All I know is that the pro tour teams will be riding all the big races & it might be harder for a rider like me cause I may have to ride more races.

Pez: Are you worried that you might be called up to do all three big tours, that sort of thing?

Pez: So you’ve done the Giro twice, Tour de France, Tour de Suisse etc – do you have a favourite race?

NG: The Giro. I like the Giro, I like Italy. It’s more laid-back, relaxed – the Tour’s just full stress. The Tour’s just horrible mate, heaps of stress where as the Giro’s got relaxed starts, it’s pretty easy for the first 100ks and then racing hard the last 80-100ks. I like it.

Pez: What about the differences in the mountains between the two big tours. Do you prefer the Italian mountains or the French Alps?

NG: Mountain’s a mountain really, isn’t it? You get to the bottom there’s 20k to the top. The Italian one’s are a little bit steeper, but all mountains are hard – I hate em. 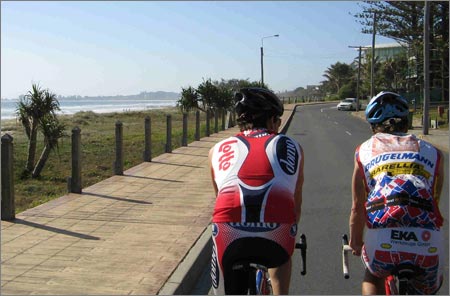 Pez: I look at you guys when I’m watching the Tour for example & I don’t know how you do it, backing up every day after finishing those mountain stages. What’s your schedule like after crossing the finish line for the day? How quickly before you’re all showered massaged, fed etc & back at the hotel?

NG: It’s all pretty quick, as soon as we cross the line, we’re straight to the bus. We go back to the coach as you know, where we’ve got 4 or 5 showers, eat in the bus on the way to the hotel, straight on the massage table at the hotel, go to dinner & then 4 hours after the stage it’s all kind of over.

Pez: So you’re not held up too much, by having someone like Robbie in the team who would be up on the podium getting his jersey or doing interviews and that?

NG: Nah, if someone wins the stage or has drug control or something they’ll go to the car & the car will wait for them, so it’s not too much of a hassle for the rest of us.

Pez: So next year with Omega-Pharma (Davitamon-Lotto), you must be looking forward to having two more Aussies on the team next year?

Pez: So at the Aussie championships it’s going to be you guys versus Fdjeux and their Aussie crew?

NG: Well, yeah (laughs) & Cofidis with Whitey & Stuey. It will be on. It will be good, the first real race of the season for us.

Pez: Next year what’s the equipment going to be with the new team? Sticking with the Merckx bikes?

NG: No, no we’re going to Ridley bikes next year & they’ll be arriving here at the end of the year for us although I don’t know what colours and that sort of thing yet. And we’ll be riding in Vermac clothing again.

Pez: So when the stuff comes I’ll have to get some Pez exclusive photos for the readers, Ok?

Pez: Last questions mate. When you’re off the bike in Belgium during the year, do you have any hobbies, that sort of thing to take your mind off the racing & training?

NG: When I’m in Belgium, nah, not much. I don’t get a lot of time to do much other stuff, just take it easy between races but I’ll take a break mid year & hook up with some friends whether in Spain or whatever and just have a little holiday mid year. When I come over here (Australia) I have 6 weeks to kind of do what I want, eat what I want, have one or two beers.

NG: yeahh… just one or two & spend some time on the Gold Coast have a bit of a surf, maybe some golf that sort of thing.

Pez: Ok Gatesy, thanks for the interview.

So, there you have it. A chat with a top Aussie domestique who is in much the same vein as Cofidis’ top worker Matty White. ‘Gatesy’ is certainly pretty laid back about his job & life as a top pro cyclist, but it’s his work for the team & dedication to the team leaders that’s seen him sign on for another two years with the top flight team of Davitamon-Lotto. Next year when you’re watching the big races on the TV look for Nick driving the peloton along & guiding McEwen to another sprint victory. In the meantime keep an eye here for our first look at Nick’s new Ridley bike in the new year and this reporter’s news from the peloton on the battle between the top Aussie pros at the Australian Championships in January.

PS – You American blokes can check Sinclair Imports for info in Ridley bikes.

Chris ‘Seldo’ Selden is a 27yr old Australian who’s been racing bikes since he was 12yrs old. Chris races in Switzerland riding for the amateur Team PROF/Fluckiger Electricite SA, and in Australia for Team Bruce Lynton BMW/Goldstars during the Australian summer.

HOMEBOY Belgium: Ode to the Off-season