North America cycling has recently been focused on the northeast – with the US Pro Champs in Philly, and the last week’s GP Cycliste de Beauce stage race in Quebec. PezCycling News met with one of cycling’s leading apparel makers, and long time rider himself – Louis Garneau. You’ll see LG gear on the backs of elite athletes around the world, including the Saturn pro cycling team. In part 1, Eric van Bockern found Monsieur Garneau ready to talk business, family life and more… 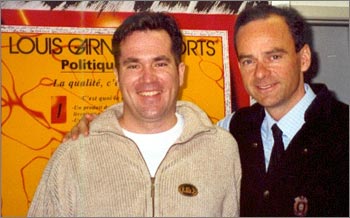 Brothers in arms – Eric and Louis have known each other for many years.

EVB- Louis, how do you view the bicycle industry as it stands now with current world events?

LG- I think our industry is mature, but perhaps fragile. We’ve been in it, at it for a long time and you know how important it is to always innovate. The branching out of my Ergo Air segment in the shoe division exemplifies my point. A certain reorganization will take place. It’s normal after we lost GT, Mongoose but Cannondale’s tribulations don’t necessarily represent us as they ventured into a division (motorsport) others haven’t.

EVB- How’s your sponsorship return on investment? Are you involved with Jean Delatour still?

LG- First the Euro guys have to wear a helmet more often (Delatour, helmet only deal). Louis Garneau Sport has been involved with Saturn for about 4 years now. Tom Shuler (Saturn Team coordinator) and I enjoy a friendly relationship from our racing days and are very cordial to each other in business.

EVB- They symbolize the company’s “head to toe” philosophy as your product offerings is incessantly growing.

LG- (smile) Exactly! Saturn is fully outfitted from socks to helmet. For me, the likes of Bessette and Dionne shine in the Canadian press and radiate consumer confidence. We have 24 sales agents each in Canada and US. 2000 shops per country and recently hired Russ Rowan of Burton (snowboards) as US sales director to insure proper follow ups.

EVB- By that you mean growth as the American market is larger. Your best reselling State?
(fyi: Not all products are available Stateside as LG Sports has a complete accessory line for his home market.) 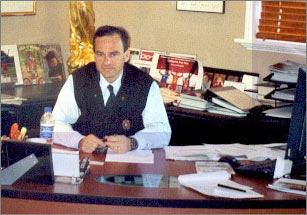 EVB- How do you reconcile your family life with an enterprise this size? I know we often see your dad proudly walk around the manufacture’s isles.

LG- (right about then, Paul Garneau walks in the large generally open door office) My father is the factory’s guardian angel and at 74, is healthier than ever and work six days a week. The staff looks up to him as the all around good guy as he makes sure the machinery, the lights are all turned off post production aside from doing some internal shipments on the road. Even back when you and I were on the same cycling club, I could approach him and say I wanted to do this race in Atlantic City and he’d be there Friday night to drive me most of the night in time for a distant event. My wife (Monique Arsenault) works here a day a week. We spend our summer at the Lake (Lac St-Joseph, Qc) within proximity of the factory and it’s a good ground for reuniting everyone, good roads for my kids to ride on too. Several entrepreneurs will say they put in a 90 hour week. Not so. Perhaps 90 hours/week is spent thinking/talking about their business but I made a conscious decision to attend galas and networking events as little as possible, albeit important in the early years. All my work is focused within these walls and I go straight home to my family at night.

EVB- Your visibility projects an empirical after glow. Two-tier question if you’re willing to elaborate: Company size and community involvement?

LG- While trying to stay more low profile as I mentioned, I sit on the administrative committee of Cascade which has 14 000 employees with a $CDN3 billion gross and Maax, a paper and shower/bath company respectively. The Francois-Xavier Garneau historic house in the old town ties in my passion for art/antiques with guided tours. We took over the oldest, longest Classic 2 years ago now called Montreal-Quebec and with the help of associate sponsors, run it on a $45 000 budget with about 400 volunteers. Last year I sat in the bunch for 2 hours with frequent 50km/h accelarations. Man! Since Saint-Augustin desired becoming a Canadian cycling center, we installed a velodrome at the local college campus next to the factory with a BMX track next to it. We also organize one race/week in the industrial park (pointing outside the window) including a Madison type criterium for the younger categories. Twenty four months ago LG Sports had $50 million in revenue, is still growing and have a total of about 450 employees, including the staff of 45 in Vermont. We support sports and culture. 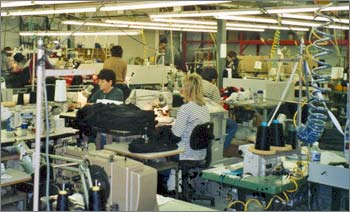 Garneau handles much of their own manufacturing.

EVB- By the look of it you’re still staying fit. How much is William, Edouard and perhaps your 5 year old daughter’s involvement in sport comes from your motivation?

LG- We guide our children just like we guide them in school. William (13) is getting notable results already. He even excelled in a race in France when we visited friends and business associate last summer. Edouard (10) is more interested in horse back riding I think. I go out with with them in one hour spurts several times/week in-season and managed to amass 2000km last year. Though my racing weight was 155lbs, I am 167 nowadays while eating less. It’s mathematical; don’t spend as much, don’t eat as much or if I overindulge in dessert at dinner, the next day I’ll be careful. I play hockey (EVB- left wing) twice a week and stay in touch with Steve [Bauer} and Alex [Stieda] for our annual Industry hockey tournament.

EVB- Even at such a young age, do you recognize some of your qualities you had as a racer in your son? You were a pretty good bike handler.

LG- My oldest had a good cardio right away. While he’s still apprehensive from his crash in his first year, he climbs well and is a good rouleur. We’re not born sprinters.

EVB- So “La course en tete” is the motto.

LG- Yes. Remember Pierre Harvey (ex-top World Cup cross-country ski racer and National Cycling Team member) used to be petrified in a large pack and was such a horse he would have to stay clear to the finish to win? 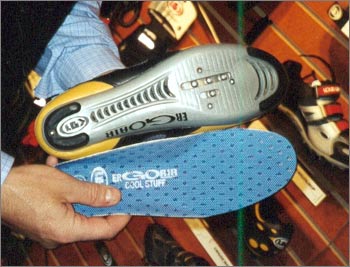 The new Ergo Shoes are just part of the “top-to-bottom” LG philosophy.

LG- As you know it’s just 2km from the factory. In 1760, one of the first Garneau to settle, his name was Louis bought the land we’re on. My love for antiques never ceased and we decorated as such, kept the ancestral feel. The house itself was built in 1837 and we recently acquired an additional 100 acres on which I have a skating rink, a pool, deers, horses and chickens.

LG- I have an experienced helper come over periodically.

LG- The Parisian region of France among other things, for its food and wines. Provinces: Quebec then BC for the Rockies and the water. Vermont for the States.

EVB- Your view on doping.

LG- You’ve read the Francophone papers about Madam X. We know who she is or might be. Back when I raced, certain guys would prepare their racing season on anabolics. If it rained, they still had the motivation to ride as if it was mid-summer. They’d quit [preparation] after desired tone was acquired. When I raced in Europe, colleagues laughed at me when they asked what my goals were, which team I’d try to join and I’d answer I was doing it for “fun”. I was going to school and was to start my business the year I went to the Olympics (LA, ’84).

EVB- You’ve achieved some impressive results outside the country. Some of the products you’ve shown me seem to require some physiological research or is it plain experience?

LG- Well I nipped [Chris] Carmichael at Fitchburg, 11th TTT in Godwood, England at the ’82 Worlds and 1st at Grand Prix de Romandie ahead of Thierry Marie. 5th Paris-Briard, 33rd Olympic road race in Mission Viejo and Canadian pursuit champ in 1978. You’d better have had suffered on the bike to understand overheating of the palms, foot, etc., hence the Ergo Air line. It’s the only way to put out a product the connaisseur will ride. Something efficiently different.

That’s all for now folks –

We’ll bring you Part 2 in the near future. In the meantime, please take a look at the Louis Garneau website at www.louisgarneau.com.

TDF Preview: On Tour With PEZ