Roaming the aisles at Interbike I had the good fortune to bump into Team Quark’s road star Lyne Bessette, signing autographs at the Louis Garneau booth. As soon as she signed mine, I introduced myself and asked if she’d be up for an interview. “No Problem!” she said. A couple of weeks later, we met her again in Toronto, where Randall Butler got the PEZ-Clusive – here’s Part 1.

I’m sitting in a convention centre with Canadian Road Champion and UCI 14th ranked Lyne Bessette. She has already had a long day signing autographs and doing work for one of her sponsors, www.bioetik.ca, makers of Equibar – a great tasting organic sports bar. No doubt Lyne is thinking about kicking back with her husband, ‘Jittery Joe’s-Kalahari’ pro Tim Johnson, for a glass of wine and some French cuisine. Instead she gets to spend the next 30 minutes surrounded by the Pez crew prodding her with cameras, voice recorders, and a bunch of personal questions.

Lyne, once voted as the prettiest and friendliest woman in the peloton by readers of LadiesCycling.net, took it all in stride. As for us, it was one of the perks of the job…, 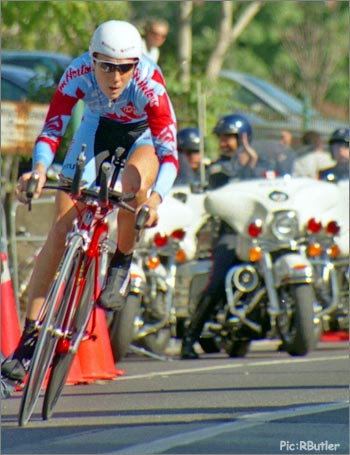 Randall: Lyne, you come from Knowlton, a small town south of Montreal along the U.S. border. You’re pretty much a celebrity there. When we talked on the phone a few days earlier you were heading out to an aerobics class. How did people react when you walked into the class?

Lyne: It’s actually pretty funny. I did it to get my best friend to exercise. I remembered I was so bad at aerobics but I’m like – I’m going to try it again. And the people all know me and they just laugh and I laugh with them because I’m so bad at it.

Randall: You and Tim have traveled a lot as pro cyclists. You’ve seen a lot of interesting places in Europe and North America. Why did you choose to make Knowlton your home?

Lyne: I was born there and when I started my career it took a couple of years then I bought my first house there. There was no reason why I would go and live somewhere else because I’m traveling all the time. I’m never home more than ten days in a row.

Lyne: No – well he’s getting better. I think he’s going to learn more this year. He just signed with Jittery Joes and he has a Quebec teammate, Bruno Langois. Bruno is not as good as me in English so I think he will get Tim to speak French I think more than I do.

HIKE, RUN AND…SNOWSHOE???
Randall: What do you do besides road and cyclo-cross racing and aerobics classes for fun?

Lyne: Tim and I do a lot of hiking in the fall when we get off the bike. We do some run-walks because it’s so hard to run for an hour without stopping. I used to run for competitions but I can’t do it as much any more.

I love to cook. I have a great sponsor in Quebec, a health food store called Rachelle-Bery. It’s great – I get awesome food there. When you travel so much you don’t want to eat in restaurants all the time so we have people over and I cook for them. 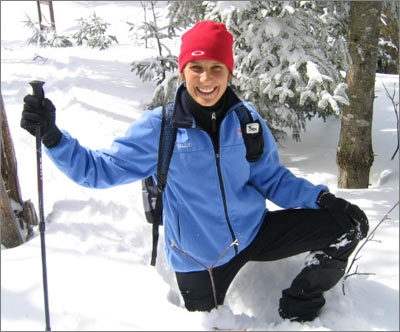 Randall: Quebec is known for its long cold winters. At the same time, it turns out a lot of good bike racers, maybe more than anywhere else in North America – why do you think that is?

Lyne: I think we’re lucky that Quebec has great athletes. It’s a great place to live. Even if you can’t ride 12 months a year you can do other sports that will keep you in shape, keep your mind in shape and then when you get on the bike you’re ready to go.

And that’s what I used to do when I first started. I would come to Redlands and I came from the snow. I was snowshoeing and doing a little bit of Compu Trainer but I never went to California to train. I won Redlands in 1999 and I won last year too. That was how I used to do it. And we have a great support from the Quebec Federation and I think that helps too.

LOCAL HERO
Randall: You’re very well known in Quebec and you get a lot of media attention there – probably more than cyclists anywhere else in North America. In Quebec the media coverage of cycling is perhaps more on the level of what pro cyclists get in Europe. How do you find that – is it too much pressure, do you enjoy it?

Lyne: I think it’s difficult at the beginning. You want to get away from it because you just don’t know how to deal with it. You don’t know what positive things they can bring to you, or the way to talk to them. This is all learning, a learning experience through your career.

Randall: Have you found the media to be generally fair and supportive or have there been times when the media expectations were perhaps too great? 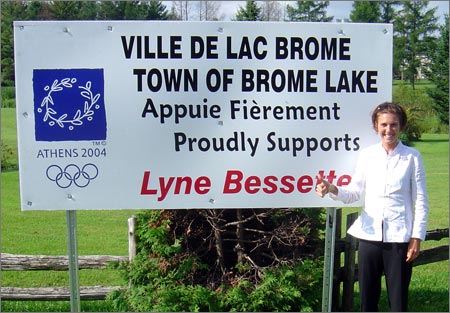 Randall: What about the people in Knowlton? When you go out shopping..,

Randall: …do they ask you about cycling, do you feel pressure from them to perform?

Lyne: No not at all. They’re always very grateful, they’re always ‘good job, you didn’t get a medal but we don’t care’. The mayor put big signs at the entrance of the town saying ‘We are proud supporters of Lyne Bessette, Olympic athlete’.

THE OTHER WOMEN
Randall: You’ve had a lot of success racing in North America and in Europe – do you have a preference?

Lyne: I really like both. They are so different. In Europe the races are hard from the beginning. You have to fight a little more, it’s more challenging. Here it’s totally different. It can be really slow and there are fewer girls who can win the race. In Europe the field is deeper – that makes it more challenging. Depending on how I am in the season, how I feel, sometimes I don’t want to go to Europe and sometimes I do. I like to split both.

Randall: Tell us about some of the women riders in the international peloton that you admire and respect?

Randall: I was going to ask you about that (crash in the Athens Olympics road race). Jokingly, are you relieved she has retired now…

Randall: …because you won’t have to worry about crashing on her wheel again?

Lyne: You know, this is always something that can happen and you can’t do anything about it. Those two girls are definitely great athletes. Joane Sommariba, all the girls who are world champions or Olympic medalists. The Australian girls are great.

I think all athletes have two personalities. When you’re on the bike and when you’re off the bike – two different things.

Randall: Two personalities – one is your normal personality and one is more aggressive when you are in the peloton. Does that apply to you as well?

IT’S A GUY THING
Randall: In September you rode the Green Mountain stage race in Vermont with the men. Where do you find the confidence and motivation?

Lyne: To ride with the men? Actually it’s really motivating for me. The guys understand why I do it – because I want to get better. For me it’s faster racing, more aggressive and I just like it because for me I have no pressure. I’m not there to win. I’m there to try to follow as long as I can and maybe get in the break. I once did the Quebec – Montreal race and that was great too. I suffered for a couple of hours and then if I can make it to the end great, if not that’s ok too.

Randall: How about training with Tim – does it raise your level or is it a bit too much?

Lyne: We actually got to know each other for that. It’s hard because were at a different level in our year and we have different training. So we usually only do our easy rides together. Sometimes I’ll just stay on his wheel the whole ride because he’s riding fast enough and I’m suffering. It does help me out for sure.

Randall: In some cases I would say that elite women’s racing is more aggressive than the pro men’s racing – for example the 2003 World Championships or perhaps the Athens Olympics. What do you think – how would you compare the two pro pelotons?

Lyne: I think the length of the women’s race makes the difference. Sometimes the guys won’t race the first 100k or so, then they start racing. The women’s, it can start from the gun. The girls, they’re not scared to – I’m not saying that the guys are scared to hurt but 250k, if you start from the gun…, I think in women’s cycling the distances are reasonable so that it’s possible to do that.

Stay tuned Thursday for Part 2 of our chat with Lyne, where we get a little more personal and talk about life as a pro racer married to another pro racer – Tim Johnson. Check out some of Lyne’s favorite websites:
https://www.geocities.com/lynebessette/
https://www.bioetik.ca/
https://www.quarkgear.com/
https://www.thebeanteam.com/home.html
Like PEZ? Why not subscribe to our weekly newsletter to receive updates and reminders on what's cool in road cycling?

End of the Season Review: Back to the Future