PEZ got a chance to chat with 2005 Tour de Beauce overall winner, Nathan O’Neill before the Tour de France. The planned quick interview, quickly became an enthralling discussion. The 30 year old Australian, who lives in Georgia and rides for the Navigators Insurance Team is a true artist of the time trial, and a most interesting person to talk with. Here’s Part TWO!

A PAIN IN THE NECK
PEZ: You suffered a horrific wreck at the Tour de Toona in 2003 (Nathan broke his NECK both the C1 and C2 vertebrae), how has the recovery been?

O’Neill: Everthing is fine now. I was extremely lucky. Definitely had the man upstairs taking care of me there. I could be talking to you from a wheelchair right now, and that would be a good scenario. Everything is fine, it definitely changed me in the way I look at things, and the way I race, I don’t take risks anymore – I’m a lot more cautious. It’s just not worth it. It makes me stop and think, well, ok what would I do if something happened here? Where would I go? How would I get out of this? It makes you appreciate it when you’re doing well, makes it a lot sweeter. 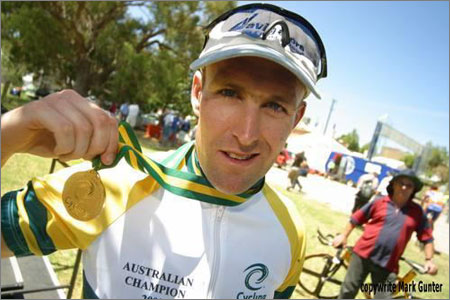 From a broken neck and near death experience to back to back Australian National TT Champion.

PEZ: What was the time frame on your return to cycling after the wreck?

O’Neill: I broke my neck July 29th, 2003 – I got back on the bike on October 15th – 10 weeks. It could have been a lot longer, it was supposed to be a lot longer. There was a complication with the healing process though and they had to do an emergency surgery to insert a screw into my neck. Natural healing would have taken three times longer, but with the screw in, the bone just had to harden around it.

SATURN DAYS
PEZ: The Panorama Point Stage at Redlands in 2003 – you, Horner, and Danielson (all of Saturn) won by almost 20 minutes! How in the hell did that happen? 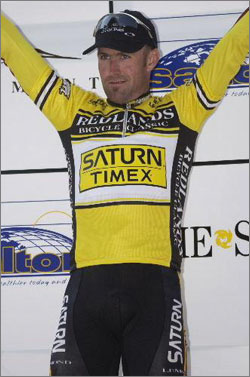 O’Neill: It’s kinda funny. On the second lap, going up to the KOM – Clinger was leading Vaughters (both Prime Alliance) out for the KOM. Clinger led it out so hard with only Vaughters, Horner, Danielson, and myself on his wheel. That was the first mistake – he drilled it so hard, it split the group and then Vaughters was gapped off. Danielson yells – Vaughters isn’t here! Then Horner says GO! Once we got 10 seconds it was all over. We just drilled it for the next three laps. We were getting radio reports, and at one point we heard that Pate was driving it on the front. When Horner heard this, he said, one more lap! Pate was the main horsepower in the bunch, so once he was done… Sure enough, when Pate pulled off, the gap went from 90 seconds to a few minutes in like half a lap. That was it, game over. We just rolled over each other after that. It was pretty epic, pretty cool, but really hard at the same time – it was really cool to be a part of. 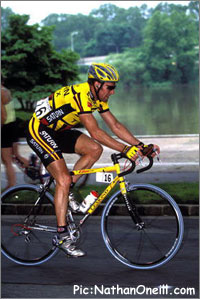 PEZ: What was it like on Saturn that year? That was arguably one of the best teams America has ever seen… Was it a matter of having the best riders all on one team, or was it a real team?

O’Neill: We had good riders and a good team – phenonemal talent and chemistry, when you have those two together at the same time – unstoppable. We always had one or two guys absolutely flying. The guys that weren’t flying were there to kill it for those that were. There was always 100 percent commitment from everybody. Everyone was doing their thing and taking care of business. I have never been a part of anything like that, and don’t know if we’ll very see anything like that again. If it ever does come about though, I want to be a part of it. It’s really difficult to formulate though – talent and chemistry.

O’Neill: I had some issues – I would have won Valley of the Sun, but got crashed out in the crit in the leader’s jersey. I hurt my knee and had a bunch of problems after that. It didn’t really get fixed until after Tour de Georgia, and I didn’t really race until the Tour of Connecticut. Last year was definitely not a model year for me. When I did race, I raced well, but it was frustrating. That’s part of being a pro bike racer though – you gotta bounce back. It was definitely a hard year.

NATHAN THE RIDER
PEZ: What would you say are your strong suits as a cyclist – BESIDES time trialling.

O’Neill: Climbing and time trialling are my two things. It’s pretty hard to ride away from me when the road goes uphill, unless your name is Cesar Grajales and you’re on Brasstown Bald. Looking at the guys who can time trial and climb in Europe, I’m not a climber per se, but if I can get a rhythm, I can go well. I’m a little too big to match accelerations from the little climbers, but once I get a rhythm…

PEZ: How big are you?

O’Neill 5’10 – 155. Any lighter and I wouldn’t time trial as well and would get blown away in a crosswind. It’s all about finding that ideal. I’m pretty happy with the way I am. 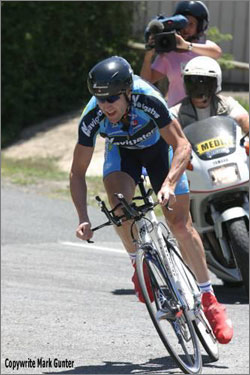 PEZ: Australia is quite the cycling juggernaut these days, why do you think so?

O’Neill: A big part of it are the development programs – the governing authority spends a lot of money one great coaches, great facilities, great hysiotherapists. What it boils down to is, these young guys get instructed on the right way to do things. They are challenged everyday in their training, by themselves, by other riders, and by their coaches. Put them out of Australia, they look back, I’ve made such a commitment, so much sacrifice, I’m going to make it work – real determination. Australians just have this innate toughness. It shows through. When you look back at the fact that we were a penal colony, a bunch of convicts – that attitude has been bred through us, we’re a bunch of criminals, a bunch of bad asses. I think it has something to do with it. They make a commitment, you give up so much, you can’t go back. An Italian in Italy can go home to his mom after a tough race. A young Australian in Italy gets to go back to a lonely apartment.

TRAINING
PEZ: You traditionally start the season with excellent form, do you do anything special over the winter to ensure quality form that early?

O’Neill: I think it’s easier to get good form at the early part of the season when training in a warm climate – like Australia. I also have the Australian National Championships in January – I am motivated to get good
form. You have to be careful not to toast yourself though. I am lucky in that I can come into form fairly quickly. Some guys take ages and ages, my form comes quickly, but on any given day it takes me awhile to get going.

PEZ: Do you train with power?

O’Neill: Absolutely – it is absolutely fundamental. There’s just no other way to evaluate what you’re doing. You can’t train with speed, because it doesn’t mean anything. If speed meant everything, at Beauce, you would
have been crying – there were some points where we were riding as hard as we could into a headwind doing 10 mph. Heart rate doesn’t mean jack either – it’s all about power. I have an SRM on all of my bikes, I send the data to
my coach. It really puts a value on every training session – you can easily predict how you’re going to fair.

I had my SRM on for the time trial at Beauce – I did 450 watts for 35 minutes. So, put it in that perspective, Michael Rogers, last year at the World Time Trial Championships, averaged 430 for an hour – so it gives me
confidence to know that I’m in that ballpark. It definitely puts a value on certain performances.

PEZ:Has your training changed much since you started riding?

O’Neill: My training has definitely changed with the SRM. Sometimes I feel good, but I’m supposed to ride easy, so I have to slow down. If I’m feeling tired, it’s the same thing – I still have to train hard – dig a bit deeper. It definitely maximizes your training time – I definitely train better with the power measurement. You don’t waste any time on the bike. It gives me confidence, no guessing – 15 minutes at this wattage, do it, ok, that’s it, wind down, back up again, or down. It’s so precise. You can
replicate things from day to day, session to session, week to week. I can replicate a certain set of training sessions leading up to a race to get desired form. I’ve had some success doing that. If you don’t have a power crank (SRM), look into it. If not an SRM, a PowerTap, whatever. 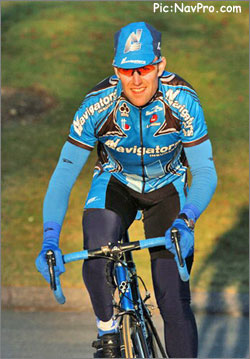 PEZ: Who coaches you?

O’Neill: My coach is a German Guy, Heiko Salzwedel – he lives outside of Frankfurt, he was the former Australian National coach. We developed a relationship back then, and he’s really knowledgeable. He’s also good friends with Ulli Schoberer (founder and creator of the SRM cranks), he has
a great understanding of how that works. I don’t have to digest all that stuff, I have a pretty fair idea of it, but he can look at it in 10 seconds and know whether the form is there, coming, or going.

PEZ: What advice would you give to young riders trying to make it in cycling?

The biggest mistake younger guys make – especially U23’s, or just out of U23’s – they forget how young they are. They forget how long they’ve got in the sport if they do it right. They’re 24 trying to beat guys 33-34. Lool at the big picture, do it right and you’ll be up there. It just takes time. When I was 18-19 trying to race against pro’s – 1993 – I couldn’t understand why I couldn’t race with these guys. They were seasoned pro’s – they had 10 years on me at least. You gotta be patient. Just wait for your right time.
Work towards that. It doesn’t happen without work, you gotta work hard, but be patient, controlled, and systematic, not erratic. 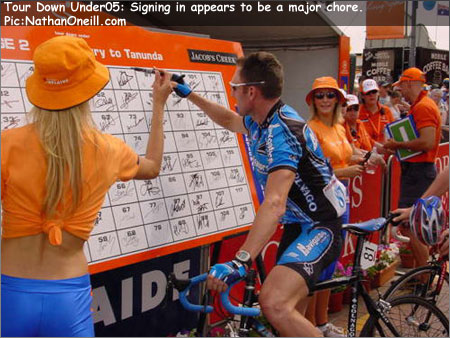 PEZ: One more question: you rode at one point with a broken pelvis?

O’Neill: Yeah, in 1995. I had a training accident in August 1995. In September there was a selection time trial for the 1996 Olympics in Atlanta. I was on crutches for a number of weeks, it was a stable fracture at least. I couldn’t walk because the shifting weight from walking was really painful. I was on crutches for like three weeks, I got on the wind trainer for about a week to turn the legs to see what would happen. I could only tolerate riding on the wind trainer for 25 minutes, the time trial was going to be about 50. I did it anyway – finished 2nd – by 40 seconds. I didn’t qualify for the Olympics. The worst part of it – I couldn’t sit down for 10 days – I did some serious damage to it. Not pretty. I was young, 23, if I was older and wiser I would have said to hell with it. See, I was being erratic.

Get more info at the Team Navigator’s website: www.NavPro.com

Make sure to check out Nathan’s own website as well: www.NathanOneill.com