With the North American racing season is done, many riders are in full sprint trying to find a team, sign a deal, and get settled for next year. When we talked yesterday, Team Navigator’s Burke Swindlehurst was one of these riders. I talked with Burke about his season, racing in San Francisco, the state of cycling, and how a pro stays married.

Burke turned pro in 1998 and just finished his 4th season with Navigators (he also rides mtb’s for Moots). The team started the year off with training camp in Tuscany, riding the Trofeo Ligueglia and a few other notable spring events, lining up next to top Italian pros like Michele Bartoli et al. 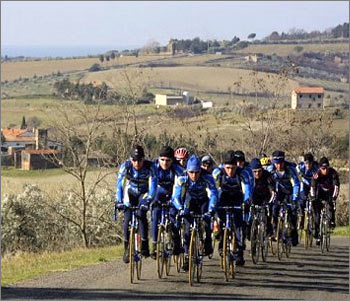 Having raced in Europe every season since 1999, Burke’s also finished every one of the several Euro-stage races he’s started. And although he enjoys racing in Europe, the appeal of being Euro-based full-time couldn’t compete with maintaining a strong family life – so racing for a US-based Navigators has been the perfect set-up.

PEZ: What was the biggest difference you found racing in Europe vs racing in America?

Burke: For me it wasn’t necessarily the speed as much as how long the speed kept up. The racing in the States can be as fast as anywhere, but over there it just seems to go on forever. Kinda like the Jane Fonda workout… just keeps going and going…

When asked about the cultural differences as part of the Euro-race scene, Burke says: “Luckily we were pretty well looked after. (As a young pro) I got to room with one of my good friends Levi Leipheimer, who’d already been over there for a few years, and he knew the drill and kept me in check.”

PEZ: How has your season been?

Burke: Racing in Europe in the early season was really cool, and having guys like Henk (Vogels) around – definitely highs. Then at Sea Otter, I crashed on a training ride and broke my wrist, which is my low point – I didn’t get back racing with team until the middle of June at the GP de Beauce. 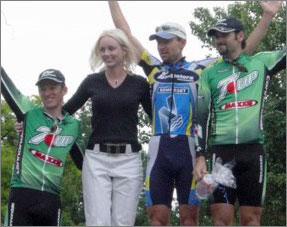 That’s Burke atop the podium at the ’03 Tour de Toona.

Interestingly, Burke’s best form all year was about 3 weeks after he broke his wrist – and got back to racing with a cast. He actually won the first stage of the Ecology Centre Classic in Utah, and placed 3rd in stage 2! His form hung on into the GP de Beauce, where he figured in 3 long days away in breaks.

Burke: For me it’s the best race all year, there are so many people who are so fanatical about it – it’s very cool. It’s a huge race and publicity-wise, it’s getting to be up there with Philly and New York City. It’s place on the calendar really sets it up as a race for who has the strongest motivation.

Going into the race we all felt pretty good. My job was to cover any dangerous breaks. So near the end a group of about 4-5 guys got away on the last short laps, and Jeff (Louder) came back from the break and we started working at the front to bring the break back. We got to about 30 seconds, but that hill on Filmore is so steep – about 7 of us on the team used triple chain rings (53-42-30×25) – and a few guys actually dropped chains going into the 30 – so that was unfortunate. And it’s a 2 minute effort that works your entire body – you get to the top and your arms are as tired a your legs. I worked really hard with Jeff trying to bring that break back, that the last time up the hill I’d given so much that I couldn’t quite get onto the back of the field coming down – and they come down that hill so fast – a 1 second gap at the top becomes a 15-20 second gap at the bottom. 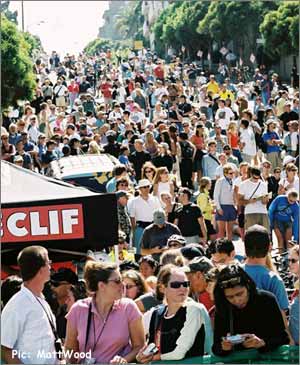 PEZ: How will you spend the off season?

Burke: I’ll probably take about 6 weeks without any regimented training doing some fishing, hiking, mountain biking. Then around the beginning of November I’ll get back on the bike start doing the long miles – 20-30 hour weeks for base training. I’m also looking forward to doing some snowshoeing, some power-yoga, maybe mix things up a little bit in the winter.

PEZ: The state of road racing in the US continues to be precarious, as we see Saturn and others ending their sponsorships. How does it look from inside?

Burke: I think the public awareness is really high. For the first time in my life I’ve had people who never took interest in my career telling me they watch the Tour every day, and asking me about tactics. Lance and his commercials, the tv coverage on Outdoor Life has made a huge difference. At a local race nearby in Logan Utah, they had huge crowds, and even had 40 kids lining up for the kids race.

About Saturn’s sponsorship: “I was pretty surprised – I think the general public is getting more into cycling, so it’s actually a big shock to see some teams pulling out. I though this would be anther year where we’d see more growth. I guess the only place I could point my finger would have to be the economy that’s driving it all.”

PEZ: We’ve seen another “human” side of Lance with the unfortunate word of his divorce. But the pro cyclist’s job is one of constant travel and long periods away from home, family, and loved ones. What’s the key to keeping a personal relationship strong, given your time apart as a pro cyclist?

Burke: I have to take my hat off to my wife – she’s the one who bears the brunt of it. It kills me when I think of her at home by herself, and I’m off with my team, doing what I love with my friends and “family”, but she’s the one back here looking after the daily stuff. Our wives are home doing the real world work, so they’re the ones who deserve the biggest credit in all of this…

Tiffany and I have been married for 11 years, and she’s been behind me 100%. I like to say she’s the brain and I’m the brawn. (She manages a tutoring center in Park City.) 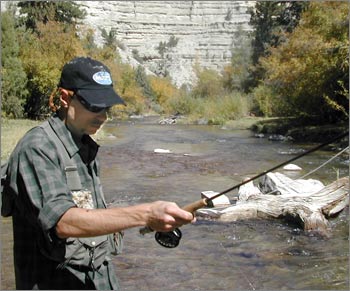 And now some time out for non-bike racing activities…

PEZ: Finally – when you’re on the road and away from home – what creature comforts do you always take with you?

Burke: For most of us, definitely the laptop. Our music’s stored on there, we have photos of our family, pets, favorite places, home. The cell phone is pretty much indespensible too.

Ed. Note: After we finished, I got an email from Burke with good news – he’d just signed on with Navigators again for 2004! Now he can get on with that well deserved break for some fly-fishing, and pint (or few) of Guiness, and some quality home time.

Check out the Navigator’s website for more info on the team and Burke.