Interview: On Track With JAN OTT

During the first night of racing at the Stuttgart 6 Days, I had the opportunity to sit down with a local hero of sorts, Jan Ott. Jan has been involved in the elite level of cycling in Germany since he was a wee junior – he’s seen the system from the inside as a National Team rider, and now as an outsider who works half-day as an industrial mechanic and uses the latter part of the day to pursue his cycling career. I interviewed Jan after the first Madison race and just before his date with a Derny… 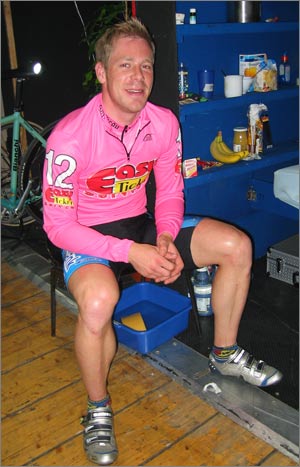 PEZ: Hi Jan, how are you doing?

Jan: Excellent, and you?

PEZ: Unbelievable, this place is insane! Mind if I ask you a few questions for an interview for Pez Cycling News?

PEZ: Ok, first off what would you rather be doing right now?

Jan: (Smiles) I can think of a few things, how about in bed with a nice lady, nice and warm and… you know.

PEZ: What gear are you using tonight?

Jan: Yeah, less than that and you get bogged down and can’t turn it over quick enough. 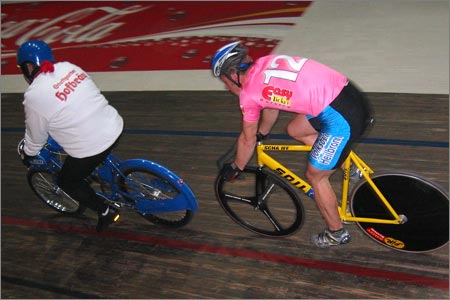 Jan: I’m feeling great. My legs are super, I can really go fast right now, but I can’t do it alone. I can go super fast for two laps, but that’s about it, then I’m winded (as is everyone) I have two other partners though, one is also on excellent form, but the other, well, he’s not going well at all. If you noticed, we rode almost the entire hour half a lap behind, just trying not to lose any laps. Me and my in form teammate would close down the gap, but as soon as the other stepped in, bam, it ballooned again, it was awful.

PEZ: Doesn’t sound like too bad of a life you live these days — work half-day and then train in the afternoons, that’s a pretty sweet deal, almost as good as mine (you can’t beat a student).

Jan: (Smiles) Yeah, it’s pretty good, but it’s hard. I get home from work, sit down have something to eat, turn on the TV, and then it’s quite difficult to get up again sometimes. It’s only a good deal if I take advantage of it.

PEZ: What are you eating between races?

PEZ: Are you going to be doing the 6-Day in Berlin?

Jan: I don’t know yet, I’m the first person on the waiting list right now. I don’t really fancy going all the way up there to do the Amateur race either. The money just doesn’t add up in my favor. I’m going to hope to get in on the pro race, and if not, well, we’ll see…

PEZ: What’s your favorite race for the six day races?

Jan: There’s nothing better than having a great partner for the team events, like the hour-long Madison race. It is so much fun to race hard, switching in and out and always being in the mix. On the other hand though, there’s nothing worse than having a bad partner, it’s like running up an escalator which is going the other way. 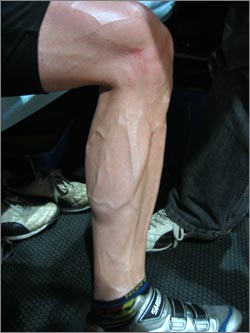 PEZ: You were once a sprinter, no?

Jan: Oh yes, as a junior I spent a year on the national team with Rene Wolff (World Champion) as a sprinter. It was no fun. There was no real riding involved. It was constant weight work, and then max 50 km on the bike. It was absolutely no fun when we did normally races, because I didn’t stand a chance in any race longer than half an hour. I really had no desire to keep up with that program so I gradually drifted away, and on to the road. The unfortunate thing was that I definitely had no desire to train for 50 km, but then again, I also didn’t get out enough and put in the time as a real roadie, so I always suffered. 🙂

PEZ: Tell me more about your contract for the 6 Days, how does it work? What is a normal day like?

Jan: Well, normally I’ll sleep till around noon, I’ll get up have a nice leisurely breakfast…

PEZ: How does this work? Do you pay for hotel and breakfast?

Jan: No no, this is all covered by the event in our contracts.

Jan: After that I’ll have a massage and then do an easy ride.

PEZ: Wow, sounds like a rough life there Jan.

Jan: It’s really not that bad the first few nights, but towards the end, it gets rough. Anyways, after an easy ride I’ll usually go an lie down for an hour or so, and then gradually get ready for the night ahead. Racing doesn’t start until almost 9 in the evening, so there is no real hurry during the day.

PEZ: How do you get a spot in a race like this?

Jan: Well, you need to apply, send in a resume, your results and such. It’s not really that hard for me to get into the Stuttgart 6-Day, as I’ve had some good results on this track, and have raced well in the 6-Day event here before, and I’m also a hometown racer of sorts. For a race like Berlin, I’m not so much at an advantage. The organizers look for racers that make their event look the best, and I’m sort of on the bubble, I’m no big name racer, that’s for sure.

PEZ: What exactly does the contract cover for you then?

Jan: A room, breakfast, another meal, and the money itself…

PEZ: Excuse my abruptness here, but what kind of money are you making here?

Jan: Let’s just say it’s not that much. I have to pay my mechanic, my masseur (there’s a word in German, Betreuer, it means a lot more than masseuse — it’s more of a trainer, masseur, helper, friend, aid, all in one), and also for the training camp we just did in Mallorca. I don’t know how much will be left over after that, but we can safely say it will be a Euro amount with four digits, and the first number of the four will be pretty small.

PEZ: Whoa, that’s not bad at all… What song would you like to hear before your upcoming derny race?

Jan: I’m not sure, I’m going to do this race and I’ll think about it…

Jan comes up to me a half hour later, packing up his stuff, walking wearily down the stairs, he looks up and says:

Jan: All Around the World by The Pixies.

Jan: The song that I would like to hear before I race. It’s a great song, do you know the Pixies?

He smiles tiredly,
Jan: Yeah, I have all of their albums, great band…